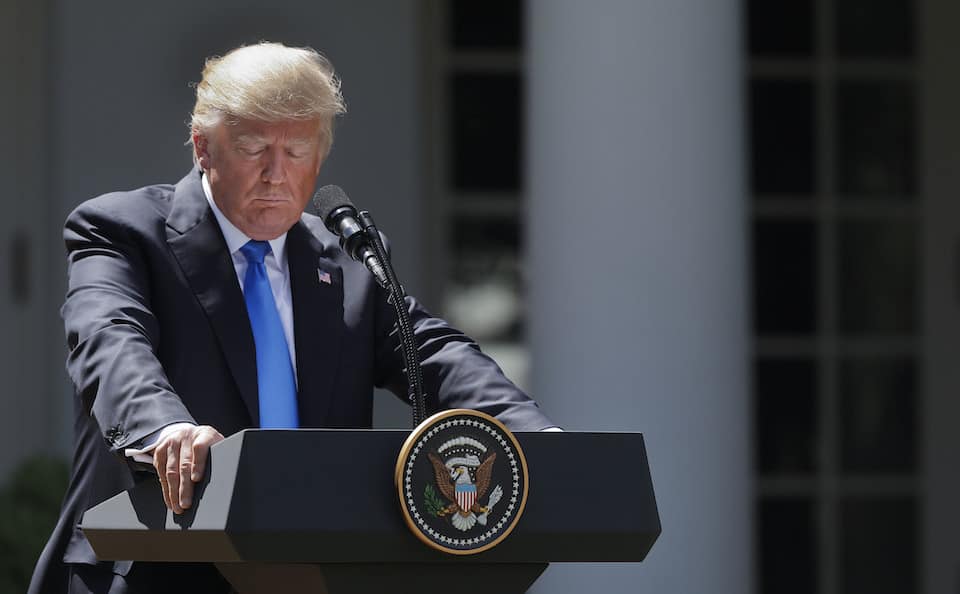 The Democrats' lawsuit alleges that Donald Trump has violated the constitutional ban on presidents accepting gifts and payments from foreign powers.

The chaos surrounding the Russia investigation, the possible collusion by members of Donald Trump's team with foreign agents who infiltrated electoral systems in 39 states, and subsequent cover-up attempts by Trump that may constitute obstruction of justice, continues to roil.

Thus, it is easy to forget that Russia is not the only legal problem Trump is facing.

Indeed, Trump was arguably in violation of his constitutional oath of office on day one, for an entirely different reason. And now, 196 Congressional Democrats filed a lawsuit to hold him accountable.

The suit — filed by Connecticut Sen. Richard Blumenthal, Michigan Rep. John Conyers, and 194 of their colleagues — is a challenge to Trump's actions as president under Article I, Section 9, Clause 8 of the Constitution, known as the Foreign Emoluments Clause:

No Title of Nobility shall be granted by the United States: And no Person holding any Office of Profit or Trust under them, shall, without the Consent of the Congress, accept of any present, Emolument, Office, or Title, of any kind whatever, from any King, Prince, or foreign State.

Simply put, this clause prohibits presidents from accepting gifts from foreign powers. The framers of the Constitution added this provision on the grounds that the chief executive should be accountable to Americans, not to monarchs or wealthy foreigners.

Examples of emoluments cited in the lawsuit include state-run enterprises of China and the United Arab Emirates leasing office space in Trump Tower; Saudi lobbyists and Kuwaiti diplomats paying for lavish functions at Trump International Hotel in Washington, D.C.; and China approving and expediting 40 trademarks for the Trump Organization shortly after Trump assumed office.

Last year, Trump promised to divest from his businesses as president, but swiftly changed his mind. His family still runs the Trump Organization and he still personally profits from its dealings — both domestic and foreign.

On one hand, some experts argue the Emoluments Clause does not ban presidents simply from doing private business with foreign states. As Fox News reporter Gregg Jarrett pointed out, Presidents Washington, Adams, Jefferson, Madison, and Monroe all exported crops from their personal plantations while in office.

But those presidents sold at market price. Trump's businesses capitalize on their connection to the White House to mark up services at obscene rates — for instance, Mar-a-Lago's annual membership fee doubled from $100,000 to $200,000 this year. Legal experts argue it would be easy for foreign powers to give Trump gifts or bribes disguised as business deals, by paying above market value.

In fact, luxury real estate purchases are a common way for overseas businessmen to launder money. Since Trump was nominated for president in 2016, 70 percent of real estate sold at Trump properties were to anonymous buyers operating through shell companies.

This is not the first Emoluments Clause action taken against Trump. Citizens for Responsibility and Ethics in Washington filed a similar lawsuit earlier this year, assisted by former White House ethics lawyers Norm Eisen and Richard Painter, and law professors Laurence Tribe and Zephyr Teachout.

The American Civil Liberties Union is looking for a plaintiff to bring another suit.

However, this case from Congressional Democrats is the largest yet, and the first one to be brought by federal officeholders.

From the moment he stepped into the Oval Office, Trump has shown a blatant contempt for the Constitution and the rule of law. This lawsuit from the Democrats is welcome news for anyone who values ethics in government.