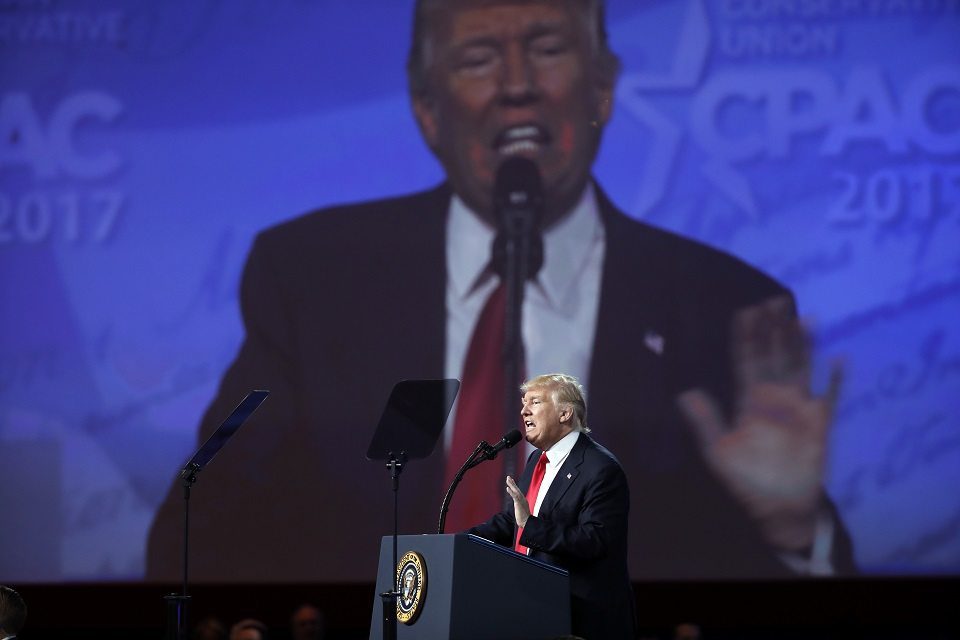 20 more threats were added to a wave of intimidation and acts of vandalism targeted at Jewish people and institutions across America, a phenomenon which has accelerated since Donald Trump’s election. Yet he has shown marked disinterest in doing anything concrete to oppose it.

The newest incidents are part of a wave of threats documented coast to coast since the beginning of the year. The Huffington Post reports that that 69 bomb threats have been called in to 55 Jewish community centers as of February 24.

And two Jewish cemeteries have been vandalized, with headstones broken and overturned in the hundreds.

Yet Donald Trump has remained tight-lipped throughout, only commenting on the topic when he was forced to respond to a direct question — and even in that instance, the best he could muster was, "I think it’s terrible or horrible, whether it’s anti-Semitism or racism or anything you can think about having to do with the divide. Anti-Semitism is likewise just terrible. You don’t know where it’s coming from but I certainly hope they catch the people."

The problem is that "where it's coming from" is, in part, Trump and his orbit of supporters. As the head of the Anne Frank Center recently noted, "Trump quacks, walks, and talks like an anti-Semite." His White House minimized the effect of the Holocaust on Jews, while his top adviser Steve Bannon has embedded anti-Semitic tropes in Trump speeches and remarks, including his slogan "America First."

During the campaign, Trump's team used anti-Semitic imagery, as did thousands of his supporters, including former Klansman David Duke. His campaign arranged for press passes for anti-Semitic media outlets to attend campaign rallies, and top staff — including his son — sat down for interviews with those outlets.

At every turn, Trump had to be forced by media to even tepidly condemn the bigotry surrounding his campaign. And he has not improved his responses now that he is in the White House.

REPORTER: On the statement today about the anti-Semitic acts, what specifically is the President going to do to address that issue? And, along those lines, there were reports earlier on that he was considering changing the mandate of this countering violent extremism program to focus just on Islamic extremist groups. Is he still considering that, or would he also leave the scope of the program to also consider —

SPICER: Are you talking about the travel executive order?

REPORTER: No, no, no, this is the countering violent extremism program that —

SPICER: Yeah, I think we’re getting ahead of ourselves there. There’s nothing to announce on that front.  And secondly, to the first part of your question, I think the President is going to do what he’s talked about since election night. It’s through deed and action, talk about how we can unify this country and speak out against hate, anti-Semitism, racism. And he’s going to continue to do that.

And I think that he will show you over the course of months and years, through what he does in terms of his policies and his speech, that he is going to be a President that brings people together, that unites them, and that speaks very, very forcefully against those who are seeking to do hate or to tear people down because of their religion or their gender or the color of their skin. I mean, those are all things that I think the President was clear on.

Not coincidentally, Trump has ordered the task force in question to only focus on Islam-related threats. Spicer reiterated toothless platitudes during his most recent press briefing.

Asked what gov can do to protect Jewish cemeteries, Spicer gives no plan to fight "this activity," says "speaking from this podium" 1st step pic.twitter.com/i4hZXFVCRK

SPICER: With respect to some of the activity that we've seen at Jewish cemeteries in particular, look, I think we have to work with law enforcement at the local and state level, I'll leave it to the Department of Justice to comment further on what additional steps can be made. But I think as been pointed out multiple times, I think one of the things that we can do is speak from this podium in particular and other places to make sure that every American understands what our values are and that that kind of behavior and activity is wrong and won't be tolerated, and the highest levels of government denounce it.

Spicer and other top aides continually insist that Trump has been "clear" on his opposition to anti-Semitic attacks, but his consistent lack of clarity is precisely why the question keeps coming up. There was never an open question as to whether Presidents Barack Obama, George W. Bush, or Bill Clinton opposed anti-Semitism — because none of those leaders made avowed anti-Semites a part of their electoral coalitions.

Americans are being threatened, and it is part of the president’s job to protect and defend all of us from enemies foreign and domestic. Trump is falling down at this sacred duty, and it appears it is by design.