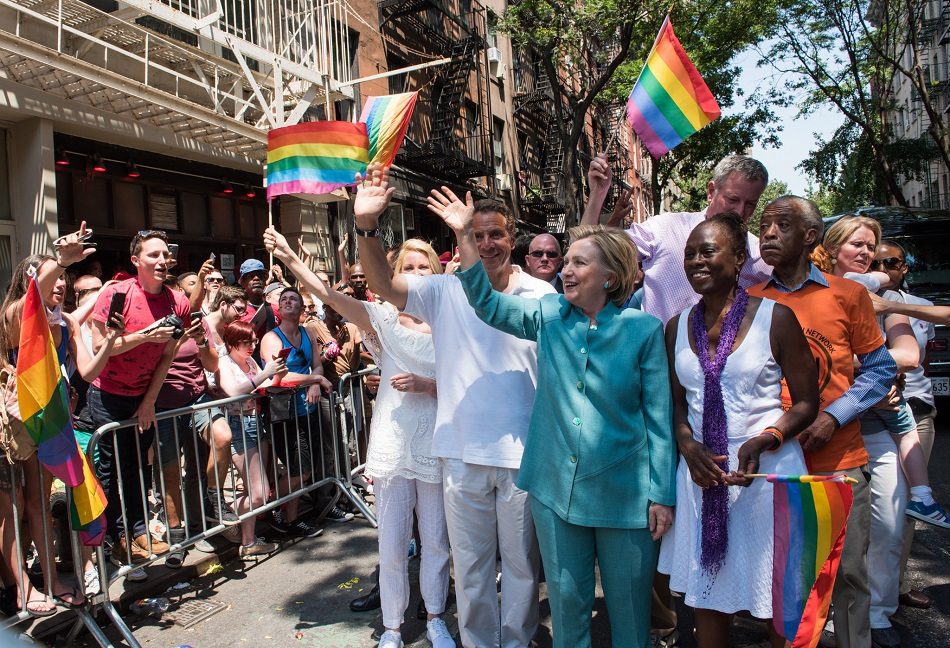 On the subject of full equality for LGBTQ people, it is unmistakable which candidate (and which ticket) is the one to continue the progress made by the Obama Administration.

President Barack Obama has a very strong record on LGBTQ issues. With the repeal of "Don't Ask, Don't Tell," the striking down of the Defense of Marriage Act, marriage equality becoming legal nationwide, the signing of the Employment Non-Discrimination Act, and new regulations from the Department of Health and Human Services affirming full coverage for transgender health care under the Affordable Care Act, the lives of queer and transgender Americans are vastly improved from just a few years ago.

But there is still a lot of work to be done and Hillary Clinton is the clear choice to do that work, as an advocate for broader and more fully recognized rights and equality in the years to come.

Her campaign's factsheet on the subject evinces her dedication to furthering these issues.

As President, Clinton would work to pass the Equality Act, a bill that would amend the Civil Rights Act of 1964 to include a ban on discrimination on the basis of sex, gender identity, and sexual orientation in the areas of employment, housing, public accommodations, and more.

She would put an end to the harmful practice known as "conversion therapy," which seeks to use baseless psychological treatment to change a person's sexual orientation or gender identity, especially minors.

Additionally, she would work to protect LGBTQ youth and families by providing safe shelters for homeless minors, rooting out bullying in schools, and ensuring equitable treatment of LGBTQ families in the adoption process.

She would carry on the lifesaving fight to end HIV and AIDS.

As Commander-in-Chief, she would continue the progress made for LGBTQ service members, upholding the recent decision by the Pentagon to allow transgender people to serve openly without fear of recrimination or discharge.

She would focus on improving and protecting the lives of transgender people, and to ensure that they are treated equally in all areas of society, including the justice system and interactions with law enforcement.

And she would, as she has throughout her career, promote LGBTQ rights around the world.

As a senator, Clinton worked to address hate crimes, discrimination in the workplace, and protection for LGBTQ parents. As Secretary of State, she led many efforts to improve the lives of LGBTQ citizens in all corners of the world, boldly proclaiming to a global audience that "gay rights are human rights, and human rights are gay rights."

And earlier this month, Clinton wrote a historic op-ed for the Philadelphia Gay News. As my colleague Melissa McEwan noted:

During the 2008 election, Hillary Clinton did an interview with the legendary, 40-year-old Philadelphia Gay News, during which she promised to make global LGBT rights an active "part of American foreign policy," which is a promise she kept.

At the end of that interview eight years ago, PGN asked her if she would still speak with them if she became the Democratic nominee, to which Clinton replied: "Absolutely and I'll speak to you as president."

Now she is the Democratic nominee, and she's made good on that promise, too.

It is evident that LGBTQ equality matters deeply to Clinton, and that doing the work to further it would be a major focus of her presidency.

It is equally evident that the other ticket and their party have nothing to offer in this area besides prejudice, marginalization, and bigotry, along with occasional empty platitudes meant to distract from their extreme anti-gay platform.

While Donald Trump made a vague promise, which was laced with Islamophobia, to "protect our LGBTQ citizens from the violence and oppression of a hateful foreign ideology," he has also pledged to support businesses in discriminating against LGBTQ patrons and has stated that same-sex marriage should have been left up to the states.

As McEwan has written:

That is the influence of [Indiana Governor and Republican Vice-Presidential nominee Mike] Pence, who has amassed a sickening record of hostility toward LGBTQ Hoosiers. Chad Griffin, president of the Human Rights Campaign, described Pence as having chosen “attacking the rights and dignity of LGBTQ people as a cornerstone of his career,” saying he is “the face of LGBTQ hate in America; the face of discrimination in America; and now he’s the face of the GOP ticket.”

As a queer woman, my humanity is on the line twice over. My agency and autonomy would be directly impacted on both fronts by either candidate — in frightening and harmful ways by the Republican nominee, and in positive and empowering ways by Hillary Clinton.

I want a president who cares passionately about the quality and vibrancy of my life and the lives of others with similarly marginalized identities: women, gay and bisexual people, transgender men and women, non-binary people, and others.

LGBTQ people need and deserve a president who sees us as absolute equals and who will fight to ensure that the rest of society — its laws, regulations, government officials, public and private people and offices — does as well.