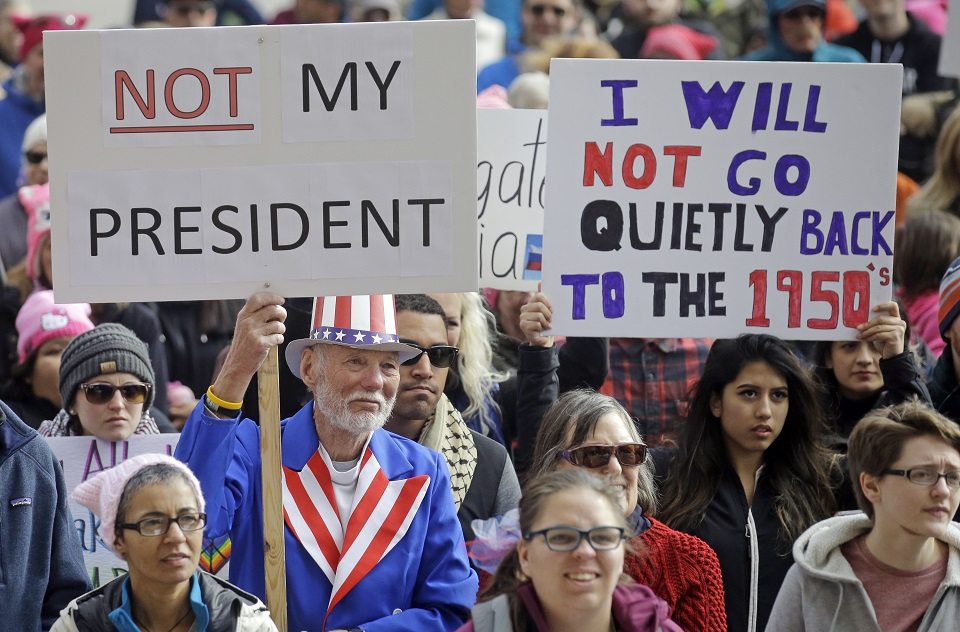 The massive turnout for protests, and strategy calls to organize them, demonstrates that the resistance against the Trump administration is not only strong, but growing. Republicans may wish to believe otherwise, but numbers do not lie.

One month into Donald Trump's time in office, the resistance is still going strong, and despite the hopes of some Republicans, it shows no sign of slowing down.

Over President's Day weekend, rallies for #NotMyPresidentsDay took place across the country.

Thousands filling the streets of DC, ready to #resist. We will not be silent & allow a bigot to destroy our country. #NotMyPresidentsDay pic.twitter.com/2WXt4IqoYx

Absolutely #NotMyPresident! Not for my #family & not for my #friends! #nyc #protest pic.twitter.com/DXf3ml13AJ

And in a statement to Shareblue, MoveOn.org noted that, in their most recent nationwide resistance conference call, organized in collaboration with Indivisible, #AllofUs, Working Families Party, People's Action, and Center for Popular Democracy, 47,000 people joined the call, helping to plan more than 200 "Resistance Recess" actions for the week-long Congressional recess at elected officials' events and town halls.

Ben Wikler, MoveOn's Washington Director, commented that "Voters are thronging the streets, flooding Capitol Hill phone lines, and, next week, they’ll be packing into every town hall event in the country. And the resistance is working."

But that message does not seem to have gotten through to the GOP. Representative Tom Reed (R-NY), told Elise Jordan on MSNBC that he believed the protests against Trump would settle down as the administration began "delivering for the American people."

JORDAN: I'm curious, you said in a previous interview, that this was a level of passion you had really never seen before at one of these meetings. If this level of passion sustains, what do you think that that means for the Trump administration and do you — or do you think this is something that is a momentary flash point and, you know, could calm down over the next couple of months?

REED: I do believe there's a possibility of it calming down, as people — I think there was a lot of disbelief that President Trump won, and they did not ever realize that he would be the President of the United States. And there's a lot of fear, there's a lot of anxiety out there. And as we start delivering for the American people, as we start putting solutions together and start enacting opportunities for people back in their district, in our district, and across the country, that I think solutions will unite this country and I think alleviate a lot of this pressure.

Contrary to Reed's belief that Congressional actions will lessen the intensity and prevalence of protests, resistance movements have only been amplifying in response to odious and harmful policies.

The American people are not going to calm down, and they are going to keep organizing and keep fighting back. The Resistance is here to stay, despite what some members of Congress may wish to believe.