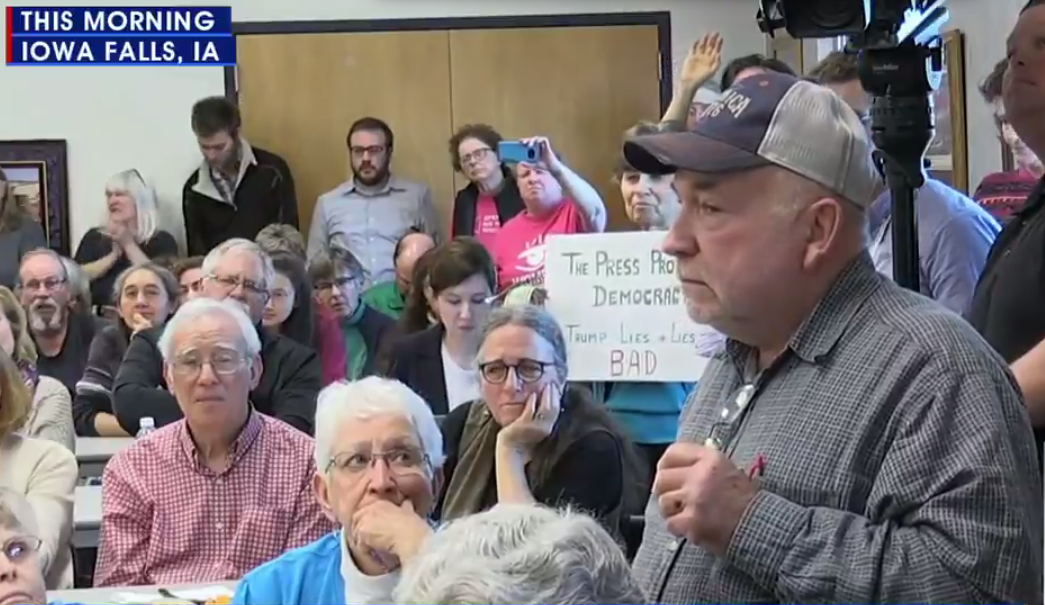 Senator Chuck Grassley held a town hall in Iowa Falls. The line was out the door, and inside, Chris Petersen, a 62 year-old pig farmer, was waiting for him.

There is something happening here, as demonstrated by the massive resistance being organized at Republican town halls recently.

Senator Chuck Grassley (R-IA) found that out when folks lined up out the door for his Iowa Falls event that started at 7:45 in the morning:

Lines outside of Grassley town hall. Started at 7:45 am; half of crowd can't get in pic.twitter.com/jdu6bfUsCA

Among the constituents that Grassley met was 62 year-old pig farmer Chris Peterson, who powerfully encapsulated the catastrophic consequences of destroying the Affordable Care Act, in language that Republicans like Grassley can clearly understand:

GRASSLEY: I haven't see you for a long time. How are you doing?

I am on Obamacare. If it wasn't for Obamacare we wouldn't be able to afford insurance.

With all due respect, sir, you're the man that talked about the death panels.

We're gonna create one great big death panel in this country that people can't afford to get insurance. Don't repeal Obamacare. Improve it, for God's sakes. [cheers and applause]

A study released prior to the enactment of the Affordable Care Act showed that about 45,000 Americans were dying annually due to a lack of health coverage. The CBO recently reported that repealing Obamacare would eventually increase the number of uninsured Americans by 32 million, so Peterson's statement is backed up by the facts.

Grassley also had to face the music for Trump's anti-Muslim policies and rhetoric, in the person of  Zalmay Niazy, who said he was shot twice while serving as an interpreter in Afghanistan:

From #Iowa #townhall. Zalmay was an interpreter w the US army in Afghanistan. He's been shot twice. He asked Senator #Grassley a question. pic.twitter.com/Ti01RsAlfX

ZALMAY: ...I'm a Muslim. Who's going to save me here? Who is going to stand behind me and say to them [inaudible under applause]. I get shot two times, I've been [inaudible] by a roadside bomb once, but nobody cared about me. But I was with the United States Armed Forces back in Afghanistan that I get shot, I didn't get shot because of my mom and dad.

These exchanges are emblematic of a change that is occurring, as resistance to Trump grows, and even "Red America" begins to wake up to what is at stake in the Trump presidency. With scenes like these at constituent events, maybe Republicans will wake up, too.