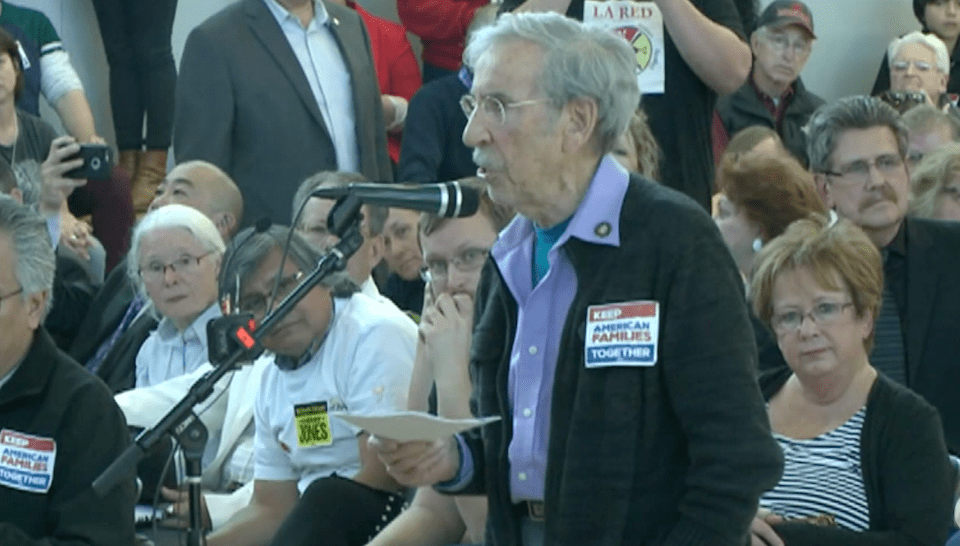 A survivor of Auschwitz and Dachau confronted a Trump administration immigration official on behalf of American immigrant families.

When 87-year-old Bernard Marks showed up for a community meeting in Sacramento, CA, with Donald Trump's Director of Immigration and Customs Enforcement (ICE), he came prepared.

Armed with a few notes and a lifetime of moral authority, he took on the Trump administration's damaging policy of targeting immigrants for arrest, detention, and deportation.

Marks began his powerful testimony, addressing ICE Acting Director Thomas Homan and Sacramento County Sheriff Scott Jones, by stating, "When I was a little boy in Poland, for no other reason but for being Jewish, I was hauled off by the Nazis." And he went on to call out the officials for seemingly ignoring this terrible part of our history:

I was hauled off by the Nazis. And for no other reason I was picked up and separated from my family, who was exterminated in Auschwitz. And I am a survivor of Auschwitz and Dachau.

I spent five and a half years in concentration camps for one reason and one reason only: Because we picked on people.

And you as the Sheriff, who we elected as sheriff of this county, we did not elect you the sheriff of Washington, D.C. It's about time you served your people here. And when this gentlemen stands up there and he says he doesn't go after any people, he should read today's Bee [Sacramento daily newspaper]. Because, in today's Bee, the Supreme Court Justice of the State of California objected to ICE coming in and taking people away from the courts. Don't tell me that this is a lie.

You stand up here, Mr. Jones, don’t forget: History is not on your side!

Wearing a "Keep American Families Together" sticker on his chest, Marks was speaking out about reports of ICE agents "stalking" California courtrooms to find immigrants not in the United States legally to arrest and deport. In a letter to Trump's Attorney General Jeff Sessions and Homeland Security John Kelly, Chief Justice of the California Supreme Court, Tani Cantil-Sakauye, decried the practice:

Courthouses should not be used as bait in the necessary enforcement of our country's immigration laws. Enforcement policies that include stalking courthouses and arresting undocumented immigrants, the vast majority of whom pose no risk to public safety, are neither safe nor fair.

The members of the Trump administration would do best to take Marks' powerful words to heart as they move away from U.S. tradition of ever-increasing inclusion and move forward with implementing their heartless agenda of injurious policies: History is not on your side.