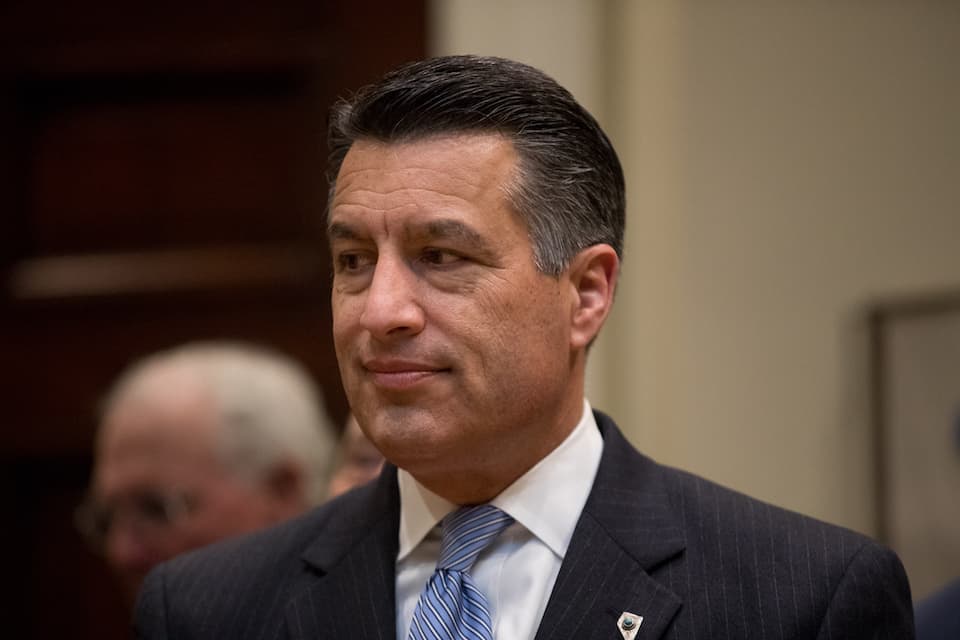 In one of the country's most watched battles for governor, Nevada's outgoing Republican Gov. Brian Sandoval is refusing to endorse Adam Laxalt, the party's nominee hoping to take Sandoval's place.

Last week, Laxalt, currently Nevada's attorney general, told the Reno Gazette Journal that he hoped to earn Sandoval's vote. By the end of the week, Sandoval released a statement to the Associated Press saying he will not be endorsing anyone in the race — and that includes Laxalt.

Sandoval is term-limited, so he cannot run again. However, the moderate, pro-choice, pro-Obamacare Republican governor remains enormously popular in the state, with a 57 percent approval rating, and less than 20 percent disapproval rating.

Nevada Democrats were quick to bring attention to the non-endorsement. "Voters don’t want a partisan hack in the governor's mansion who puts the Kochs' agenda over what’s best for them, and they'll join Gov. Sandoval in rejecting Laxalt once and for all this November," said party spokeswoman Helen Kalla.

This isn't the first time Sandoval has shunned the far-right Laxalt. The two men have significant policy disagreements about key topics such as education, health care, and immigration.

Laxalt is opposed to an education spending plan backed by Sandoval, where revenue from businesses making more than $4 million are taxed to pay for K-12 educational initiatives. In December, Sandoval said repealing the commerce tax would be "devastating" for Nevada and he would not "support a candidate who seeks to undo what we’ve done the past seven years."

On health care, Sandoval expanded Medicaid under Obamacare. The move allowed more than 200,000 Nevadans to gain access to health care and helped Nevada decrease the percentage of uninsured children from 14.9 percent to 6.8 percent.

Laxalt opposed the expansion, which would have left all those families and children without health insurance.

While Sandoval speaks up on behalf of Dreamers — immigrants brought to the United States as young children — Laxalt sued the Obama administration over DACA, the executive order that allowed those immigrants to remain in the country legally.

In Nevada, Democrats are hoping to build on 2016 successes when the party gained control of both state legislative chambers, picked up a handful of congressional seats, and retained control of the U.S. Senate seat vacated by retiring Sen. Harry Reid with the election of Catherine Cortez Masto.

In addition to the closely watched gubernatorial race, Republican Sen. Dean Heller is struggling to maintain his Senate seat amidst waffling positions on health care and steadfast support for Trump.

But embracing Trump in a state where his approval rating is dismal is not necessarily a great strategy. And while Laxalt does have Trump's endorsement, he probably would have preferred the endorsement of the state's far more popular governor.

Alas, that isn't going to happen.