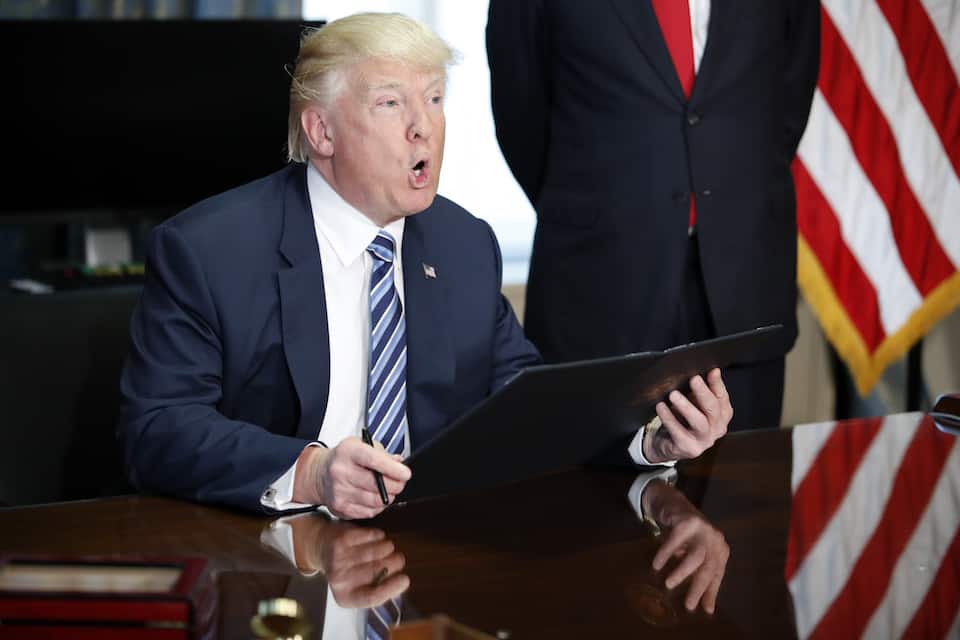 The White House has mounted a strenuous campaign to make Donald Trump's first 100 days seem like more than colossal failure mixed with meaningless busywork, but that effort backfired when a senior Trump administration official was forced to tell reporters that one of Trump's latest executive orders does absolutely nothing.

As the 100th day of Donald Trump's presidency draws ever nearer, it is becoming clear that he will have no legislative accomplishments to point to at that milestone, and not much of anything else, beyond broken promises.

But that has not stopped the Trump administration from mounting a public relations campaign which included a raft of on- and off-camera briefings to try to shape media coverage of the first 100 days.

Yet even those briefings have backfired. Treasury Secretary Steve Mnuchin was backed into a panicky corner at one, and at another, the official conducting the briefing was forced to admit that yet another of Trump's executive orders is a meaningless gesture that does exactly nothing.

Senior Department of Education official Rob Goad briefed reporters, by telephone, on an executive order that he said "delivers on [Trump's] commitment to ensure education decisions are made by those closest to students," adding that in recent years, "too many in Washington have advanced top-down mandates that take away autonomy and limit the options available to educators, administrators, and parents."

The order, Goad explained, "directs Secretary [Betsy] DeVos to review and, if necessary, modify and repeal regulations and guidance issued by the Department of Education with a clear mandate to identify places where D.C. has overstepped its legal authority."

The rest of the briefing was fairly uneventful, until the last question (transcript via email from The White House, emphasis added):

Q You said at the top that this executive order would empower the Secretary to modify or get rid of any regulations that don't comply with law. How will that process work?

MR. GOAD: So I think at the end of 300 days, and after we have produced a report, we will make those decisions once the report has concluded.

Q So is she empowered to modify the regulations as needed, or is that going to be a separate process entirely?

MR. GOAD: The executive order gives her -- empowers her to modify anything that is inconsistent with federal law.

Q Isn't she already empowered to do those things? This executive order doesn’t give her those powers, right?

Goad was prepared to take at least one more question, but the White House press official who was facilitating the call apparently put the brakes on that. "I got time for one more," Goad said, then immediately told reporters on the call, "Okay. That's it, guys. Thanks so much."

The White House's case for Trump's first 100 days relies heavily on executive orders, most of which are either meaningless wastes of paper like this one, flat-out lies like his "buy American" order, or substantive disasters that have been stopped by the courts.

Of course, for those in the resistance, the less Trump can accomplish, the better. By that measure, Trump's first 100 days have been a success. Bigly.