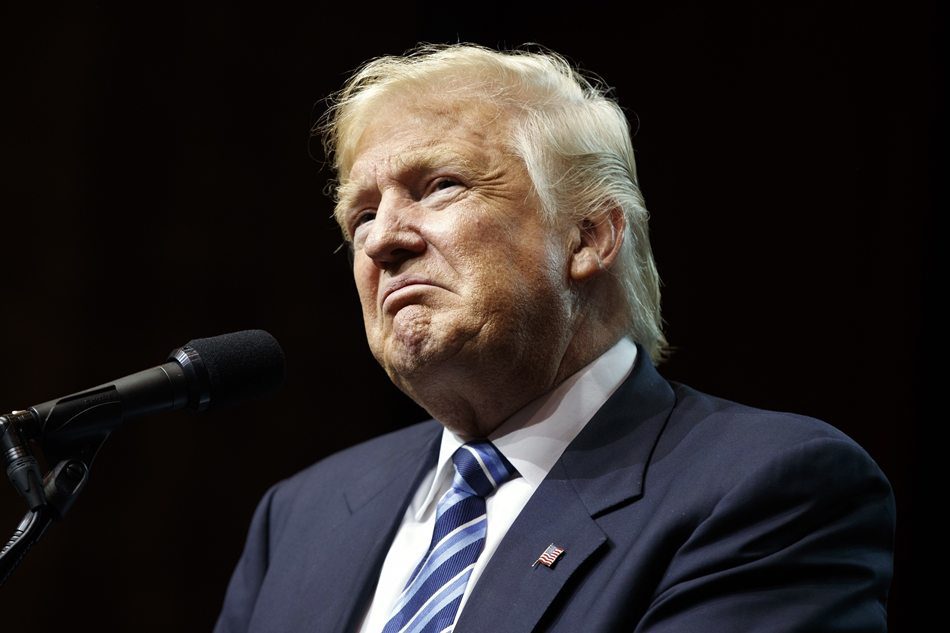 Donald Trump made an awkward vow as a candidate to be a good president for LGBTQ Americans. Now he's broken it.

Donald Trump has broken yet another campaign promise no one expected him to keep.

During his speech at the Republican National Convention in 2016, he announced, "As your president, I will do everything in my power to protect our LGBTQ citizens from the violence and oppression of a hateful foreign ideology."

He even dared to claim that he would be more supportive of LGBTQ Americans than Hillary Clinton, tweeting in June 2016, "Thank you to the LGBT community! I will fight for you while Hillary brings in more people that will threaten your freedoms and beliefs."

On Wednesday morning, Trump announced on Twitter his new anti-transgender policy for military service, and it is as cruel and hateful as one would expect from Trump and his administration:

After consultation with my Generals and military experts, please be advised that the United States Government will not accept or allow......

....Transgender individuals to serve in any capacity in the U.S. Military. Our military must be focused on decisive and overwhelming.....

....victory and cannot be burdened with the tremendous medical costs and disruption that transgender in the military would entail. Thank you

It's a despicable move, especially during what the White House has coined "American Heroes Week."

The decision to reverse a policy implemented by President Barack Obama fits right in with Trump's pattern of spite toward his far more popular and successful predecessor.

And it also shows the very serious consequences of having a vice president who has aggressively pursued a hateful agenda of discrimination against LGBTQ Americans, as a former member of the House and then as governor of Indiana.

But it also undermines a recent vote in the House to uphold the policy. Missouri Republican Vicky Hartzler argued that the policy "is costly in dollars and short on common sense." But the bill failed, 209-214, with every Democrat opposing it and even 24 Republicans joining them.

Trump, who received multiple deferments from serving in the military, including one for a supposed injury to one of his feet — he can't remember which one — loves to brag about his support for the military. And he even claimed, as a candidate, that unlike the rest of his virulently anti-gay party, he would stand up for the LGBTQ community.

But it wasn't true. And instead of honoring those who are willing to serve, Trump is treating them with the kind of disdain and disrespect he shows to nearly every group of marginalized Americans.

Worst of all, he's apparently doing so, not because it has anything to do with national security, but rather, as a deeply cynical political tactic to put Democrats who do stand with LGBTQ Americans on defense.

Just spoke to a Trump administration official about the transgender military decision. Here's what they said... pic.twitter.com/eOWdvlxTfd

Trump's bigotry and cynicism is not surprising for anyone who has listened to this man since the very first day of his campaign, when he described Mexicans as "rapists" and "criminals." Or the many years before that, when he led a grotesque and blatantly racist "birther" movement against President Barack Obama.

It has long been obvious that Trump doesn't care about anyone — not his fellow Americans, and not even those who serve our country. His latest hateful attack proves it.