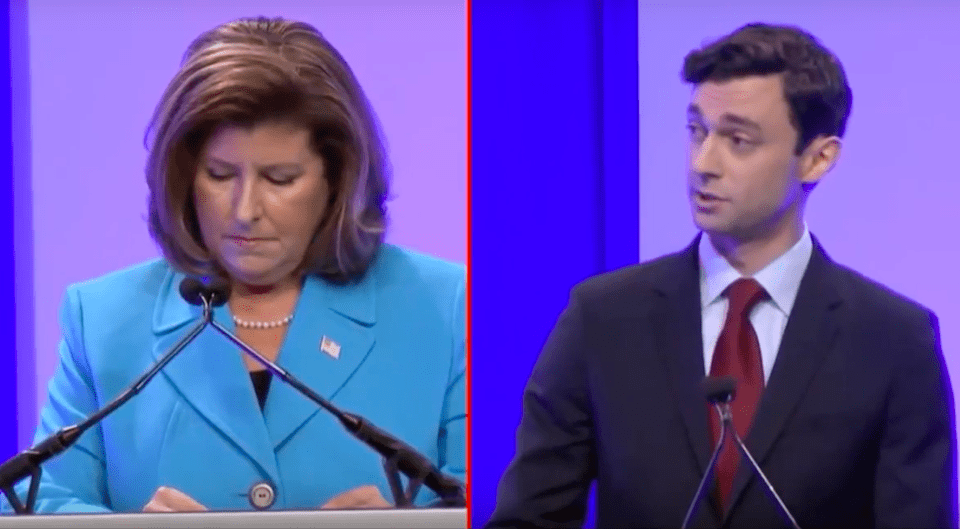 After a humiliating defeat in her first debate against Georgia Democrat Jon Ossoff, his Republican opponent resorted to blatant deception in order to smear Planned Parenthood and attempt to defend her terrible record.

She disingenuously claimed that, while serving as the vice president for public policy at Susan G. Komen For the Cure, she was merely "one individual employee," and thus was not responsible for the decision in which she was in fact the "main force."

So in their second debate, Handel chose to forego her first unsuccessful strategy in favor of another favorite among anti-choice politicians and activists: misleading the public about Planned Parenthood's role in the fight against breast cancer.

OSSOFF: I think you should take responsibility for what you did, and explain to the people of the 6th district why you thought it was appropriate to impose your own views on women here in Georgia and across the state, by defunding life-saving breast cancer screenings at Planned Parenthood.

HANDEL: If I might — Jon, I know you're really stuck on this issue, so I'm really glad you brought it up again, so that I can reiterate the facts. What was happening at Komen was not a defunding of screenings; it was a recognition that, number one, Planned Parenthood does not do mammograms. Those dollars were being realigned to provide direct services to women, so that more women would have access to more mammograms.

Handel's sarcasm in regard to Ossoff being "stuck on" the issue of women being able to access life-saving medical care is repugnant all on its own.

But so is her intentional mischaracterization of Planned Parenthood's role in that network of care. Because Handel willfully conflated two entirely separate medical procedures — breast exams and mammograms — both of which are necessary to screening for cancer.

It is true that Planned Parenthood clinics do not perform mammograms. But neither do other women's health clinics, community health centers, or even doctor's offices. Mammograms are performed at radiology centers, where a qualified technician administers the test and obtains the images, and a radiologist reviews and interprets them.

What Planned Parenthood does, along with many OB/GYNs and other physicians, is provide crucial cancer screenings — hundreds of thousands each year — that aid in early detection and save lives in the process. And, just like those other health care providers, they then refer patients as needed to the radiology centers where they can obtain mammograms.

Thus, Handel's claim that there was no "defunding of screenings" when Komen tried to cut off Planned Parenthood is clearly false. Cutting funding for an organization that performs cancer screenings is precisely that.

Moreover, referring patients to radiologists is not the end of Planned Parenthood's involvement. The staff sticks by their patients along the way, guiding them through the process and working with those who are uninsured or low-income find ways to overcome financial obstacles to quality care.

For so many people across the country, Planned Parenthood is their primary health care provider, and a gatekeeper for the grueling labyrinth that is the United States health insurance system. The fact that they do not perform mammograms has no relevance whatsoever to the reality that they do provide critical, life-saving care in the form of screenings, exams, and referrals.

Handel wants to gloss over her history of attacking an organization that has been a lifeline for millions by lying about what her defunding effort would have done, and by misleading the voters about Planned Parenthood's work.

But Ossoff — and the facts — won't allow her to get away with it, no matter how many ways she tries.