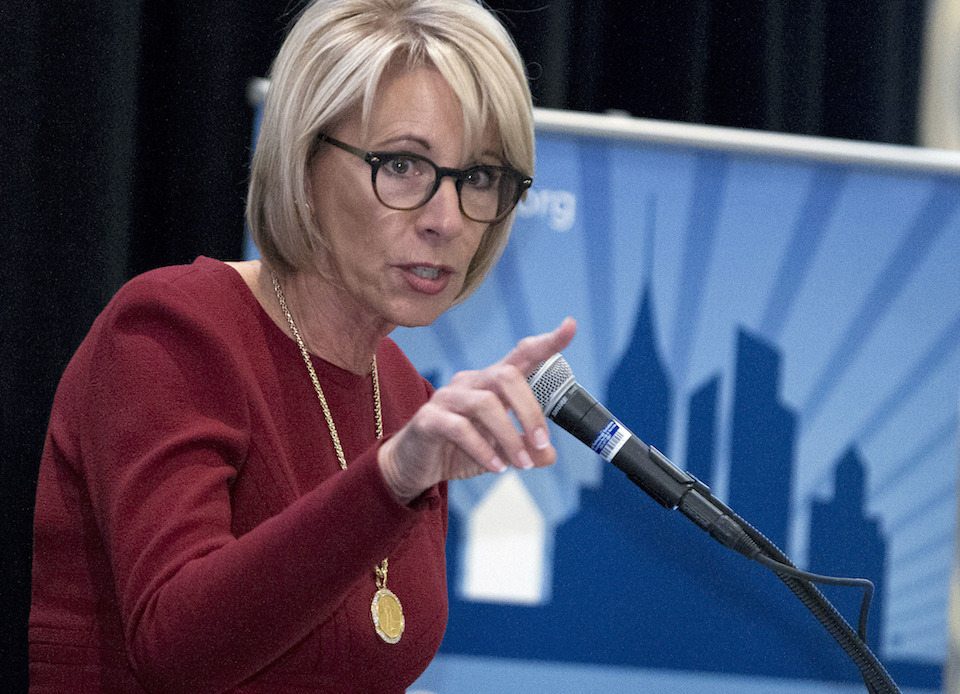 Embattled Secretary of Education Betsy DeVos continues to run and hide from the relentless criticism she has received from the education community, which denounces Donald Trump's policies.

On Thursday, DeVos went to the extraordinary lengths of ordering that the doors to the Department of Education be effectively shut to block education leaders from entering the building and delivering 80,000 "report cards" from parents and teachers around the country who graded her performance.

Federal guards were stationed outside to prevent the 100 educators from entering.

The education representatives  led by Randi Weingarten, president of the American Federation of Teachers, and Lily Eskelsen García, president of the National Education Association  assembled in Washington, D.C., to protest DeVos' call to radically slash the federal education budget by $9 billion.

This, while the Trump's administration is demanding a $50 billion budget increase for the Pentagon.

"This is the first time that I have ever been to this building where we were not let in  where the educators, where the students, where the parents of America were locked out of the federal Department of Education," Weingarten told the crowd on Thursday.

LOCKED OUT!!!!We just tried to deliver 80k #Comments4Betsy to @usedgov. We told them we were coming. We asked for an appointment. Instead they locked out educators, parents and students - @BetsyDeVosED refusing to even accept the comments much less read or respond to them. pic.twitter.com/9eIC9ul62p

DeVos has basically been at war with educators since she was sworn into office last year and began unveiling the administration's stunning string of education initiatives, such as rescinding federal guidelines for accommodating students with disabilities, weakening Title IX regulations so that colleges are urged to let accused rapists interrogate their victims, and refusing to provide financial relief to students scammed by predatory for-profit colleges.

But students, parents, and teachers have been fighting back. Hard.

Last year, as the commencement speaker for Bethune-Cookman University, students began jeering even as DeVos' honorary degree was announced. And by the time her began her speech, she was barely audible above the shouts of protest.

All of which has convinced DeVos that she's real victim here.

Meanwhile, a recent A Freedom of Information Act request by watchdog group American Oversight revealed that DeVos doesn't even come into work much of the time. Records showed she only completed a full day of work 67 percent of the time during a five-month stretch last year.

Education protesters are working harder than she is.