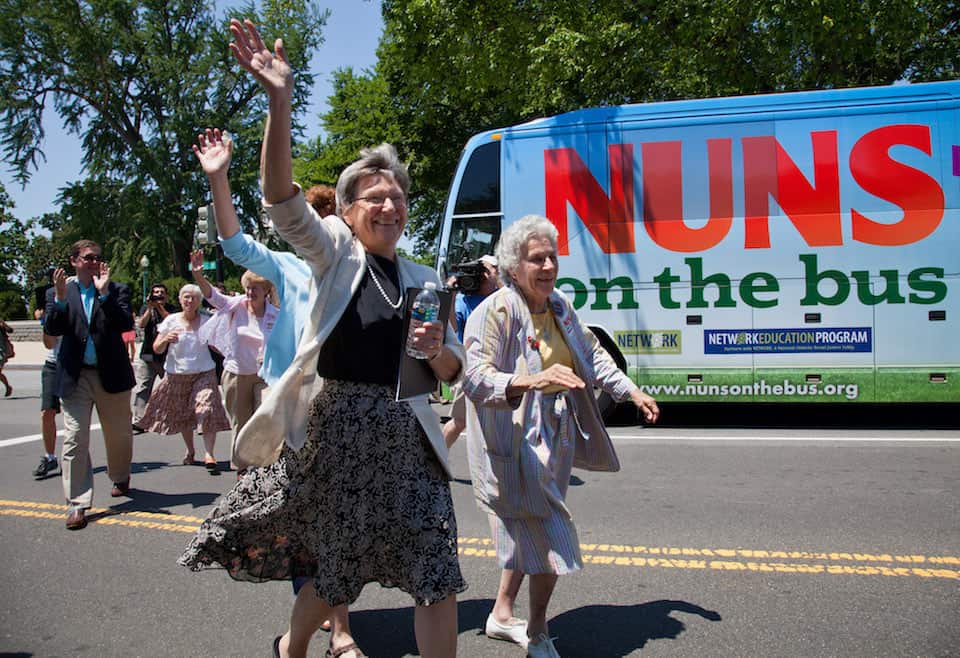 Religious leaders are appealing to Republicans in Congress to weigh the "human consequences" of Donald Trump's proposed budget, declaring that the deep and harsh cuts it contains are "contrary to our Gospel values."

Even as White House Budget Director Mick Mulvaney baldly stated that he hoped people would lose their Social Security Disability benefits under Donald Trump's proposed budget, he also described the proposal as "the definition of compassionate."

But responses from prominent Catholic religious leaders prove the mendacity of such a claim.

Sister Simone Campbell, the executive director of the organization, called out Trump for "[doubling] down on this tried-and-failed policy that leaves out the vast majority of people in our nation and preferences the wealthiest."

"This is contrary to our Gospel values," she added. And she stated the group's hope that Trump's upcoming meeting with Pope Francis would lead Trump to be "moved" by the pope's "humility, solidarity with refugees and immigrants, and care for creation."

The United States Conference of Catholic Bishops also responded to the budget, sending a letter to the U.S. Senate and House of Representatives, challenging the Trump administration and the GOP's moral leadership and their seeming willingness to compromise Americans' safety.

Removing any possibility of misinterpretation or ambiguity, the bishops directly called out Republican priorities as a "threat to the security of our nation and world."

Sharp increases in defense and immigration enforcement spending, coupled with simultaneous and severe reductions to non-defense discretionary spending, particularly to many domestic and international programs that assist the most vulnerable, would be profoundly troubling. Such deep cuts would pose a threat to the security of our nation and world, and would harm people facing dire circumstances. When the impact of other potential legislative proposals, including health care and tax policies, are taken into account, the prospects for vulnerable people become even bleaker.

The letter further called upon members of Congress to "give central importance to 'the least of these' (Matthew 25)" and described the "disproportionate cuts in essential services to poor and vulnerable persons" as "profoundly troubling."

"The moral measure of the federal budget is how well it promotes the common good of all," the bishops declared.

And indeed, as both of these groups anticipated, the budget has proven to be as cruel as expected — perhaps even more so.

It contains massive cuts to Medicaid, resources for the disabled, support for the Special Olympics, access to federal programs across the board for Planned Parenthood, and humanitarian relief for refugees and victims of famine are all being subject to massive cuts and even elimination in some cases.

It is, in short, a budget that will kill people.

But it remains to be seen if Congress will heed these leaders' calls to remember what "compassion" truly means — or if they will continue to support a disastrous budget that is built on callousness and blatant greed.