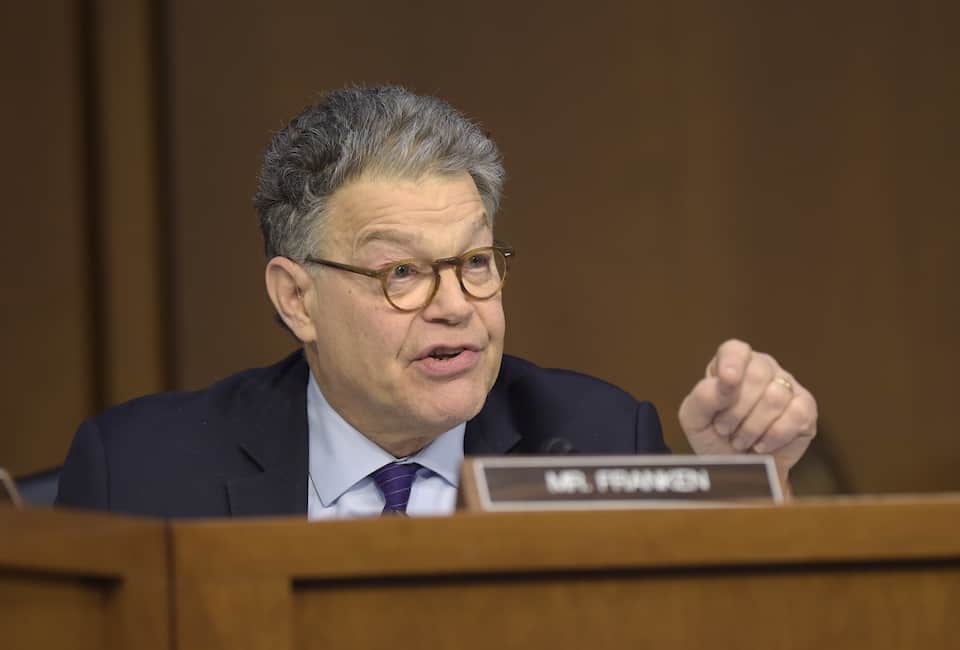 Kentucky lawyer John Bush, nominated by Donald Trump for a federal appeals court, once wrote, “The Democrats are trying to win with the same game plan as in 2008, only substitute woman for Black.”

And that may be the least controversial thing he said.

When nominated, Bush was forced to come clean about his blogging alias, “G. Morris,” which he used on his wife’s blog, “Elephants in the Bluegrass.” When blogging, Bush often relied on less-than-credible sources.

At his Senate confirmation hearing, Minnesota’s Al Franken dug into Bush’s blogging, sharply questioning the lawyer’s judgement when it came to citing sources that peddled in conspiracy theories.

"One of the qualities I look for in a judge is judgment," Franken said. He then started his questions to the rightwing blogger seeking a seat on the circuit court by asking about judgment and how Bush decided to site World News Daily, a site Franken described as "a website known for peddling conspiracy theories, fake news, and white nationalism," in his posts.

It went downhill for Bush from there, who squirmed and struggled to defend his judgment in relying on a fake news site for his far-right writings.

FRANKEN: You used the G. Morris alias when you wrote a series of posts about President Obama that seemed to focus on the president's Kenyan heritage. One of those posts quotes freely from an article on World News Daily, a website known for peddling conspiracy theories, fake news, and white nationalism. World News Daily was also well known for trafficking in birtherism — the widely debunked and racist belief that President Obama was not born in the United States. The article you quote from suggests that a reporter in Kenya was detained by the government because he was investigating, quote, "Barack Obama's connections in the country." What point were you trying to make in this post? It was a post titled "Brother's Keepers," as in — this is the name of it — "Keep that anti-Obama reporter in jail."

BUSH: Well, first of all, before getting into the particular post, I have to tell the committee, there are some things I've written on the posts, or the blog, that I wish I could phrase differently or said differently at this point. That particular post, I don't recall all the details of it, but I was certainly not intending to endorse any views of another group as far as birtherism goes.

BUSH: As a blogger, I was finding things that were in the news that were of note. I thought — I wasn't intending to, through the post, to say that President Obama was not born in this country. I never—

BUSH: As I said, when I was doing the blog, I made some posts that I today would not do. And I don't particularly recall that one. What went into the decision to use that particular story, but I am not endorsing any of the birther view points of that particular person.

BUSH: I don't know whether I decided that or not. I just really cannot remember.

FRANKEN: So you were free — you felt free to put posts out that cited sources that you knew were not credible?

BUSH: No, senator, I'm not saying that.

FRANKEN: What are you saying?

BUSH: I'm saying that as a blogger, I was making political statements—

FRANKEN: Using sources that engaged in fake news, hate speech. And again, what I was saying was, is that I think we have to, when we're confirming judges, look at judgment. And in my mind, using my judgment to confirm someone to the circuit court who felt free to blog posts, and can't answer how he decides whether to cite a source or not, whether it's credible or not, that's disturbing to me. Thank you.

Despite Franken asking the same question multiple times, Bush was not able to explain why he would use a racist fake news site to write his "political statements."

Unfortunately, citing websites that peddled hate speech is only one aspect that makes the prospect of John Bush on a federal court disturbing.

On LGBTQ rights, Bush was “irked” when the Kentucky Supreme Court threw out a law criminalizing sodomy between consenting adults.

His views on women aren’t any better. He said that slavery and abortion are the “two greatest tragedies” in our country. His anti-choice rhetoric paints “activist judges” at the Supreme Court as using flawed reasoning in Roe v Wade.

As for a free press, Bush and Trump see eye to eye. While Trump regularly attacks the press as an “enemy,” Bush has argued that New York Times v. Sullivan, widely recognized as “the clearest and most forceful defense of press freedom in American history,” wasn’t correctly decided.

Franken continues to be one of the best senators at revealing the incompetence and disturbing bigotry that the Trump administration seems to elevate and celebrate.

And he is right about judgment, of course. Anyone who peddles in conspiracy theories and flirts with white nationalist websites has no business being nominated, let alone confirmed, to a federal court. Even if they serve as senior advisers to Trump himself.