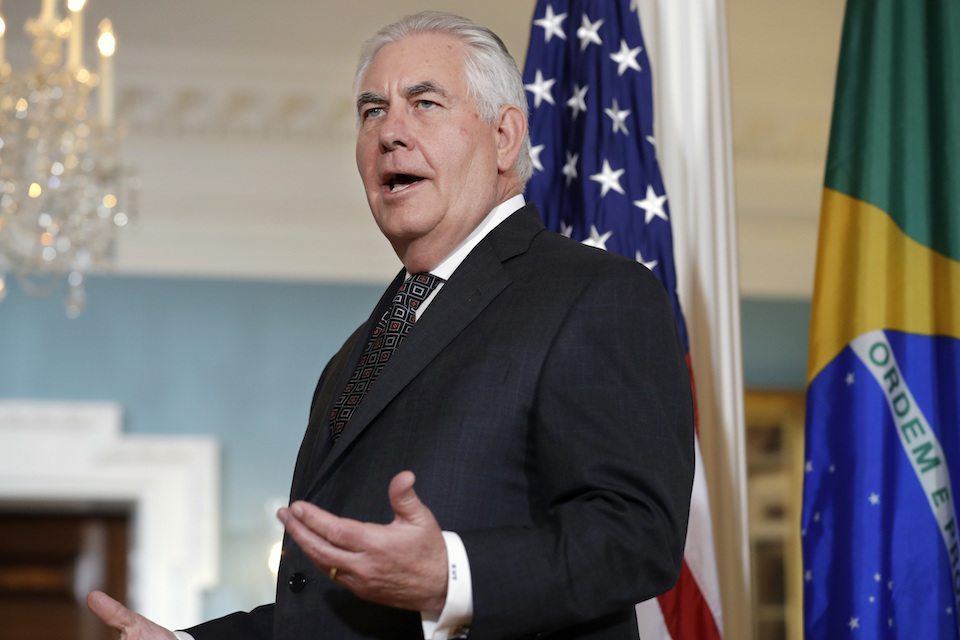 It seems the need for rest and relaxation will become one of the defining hallmarks of the Trump administration.

Working in the Trump White House must be very exhausting.

After all, Donald Trump himself has needed regular golf outings to get him from nearly every week to the next. And he's planning to take nearly the entire month of August off, which his team says is just fine because he's supposedly "crushing it."

His Environmental Protection Agency chief, Scott Pruitt, spent about half the spring on extended trips to his home state, often with the merest hint of official business.

And now Secretary of State Rex Tillerson is also in need of some rest and relaxation — though his staff apparently didn't see the need to let the public know beforehand.

State Department spokesperson Heather Nauert told reporters Tuesday, clearly to their surprise, that Tillerson would be "taking a little time off" following his "mega trip" to the G-20 summit in Europe.

When a reporter asked about the discrepancy between Tillerson's public schedule and his actual activities, Nauert tried to dismiss the question by claiming she didn't know what the "standard" was.

REPORTER: To Matt’s question about the secretary, though, you said he was traveling today. His public schedule said no available appointments today. It said the same thing yesterday. Last Thursday, it listed nothing, and we know he was on Capitol Hill briefing the House, he was at the pentagon with the president. Can you say why we’re not being told where he is?

NAUERT: Well, he does have the ability to go away for a few days on his own.

NAUERT: Just taking a little time off. He’s got a lot of work, he just came back from that mega trip overseas — as you all well know, many of you were there — with the G-20 and his other travel, as well, so he’s entitled to take a few days himself.

REPORTER: Of course, I don’t think anyone’s arguing against that, but why not just say he’s on vacation then?

NAUERT: I don’t know what is standard for secretaries of state, how they actually list private days. I can check to see what the prior arrangements were. Matt Lee probably knows, as our State Department historian. But that I’m not aware of.

LEE: But a public event, like on Friday, as we’ve discussed is —

If Tillerson is already feeling fatigued after six months and one G-20 summit, one wonders how he'll manage to match his predecessors in the miles traveled department.

This atypical opaqueness on the secretary of state's schedule would be concerning enough on its own. But it comes amidst rumors that Tillerson was considering resigning his post — rumors Nauert shot down at the press conference, but which seem to be another pattern for this White House.

If Tillerson indeed has no plans to resign, it might help quash the rumor mill if he stuck to the job, and didn't attempt to keep his vacations under wraps from the public.