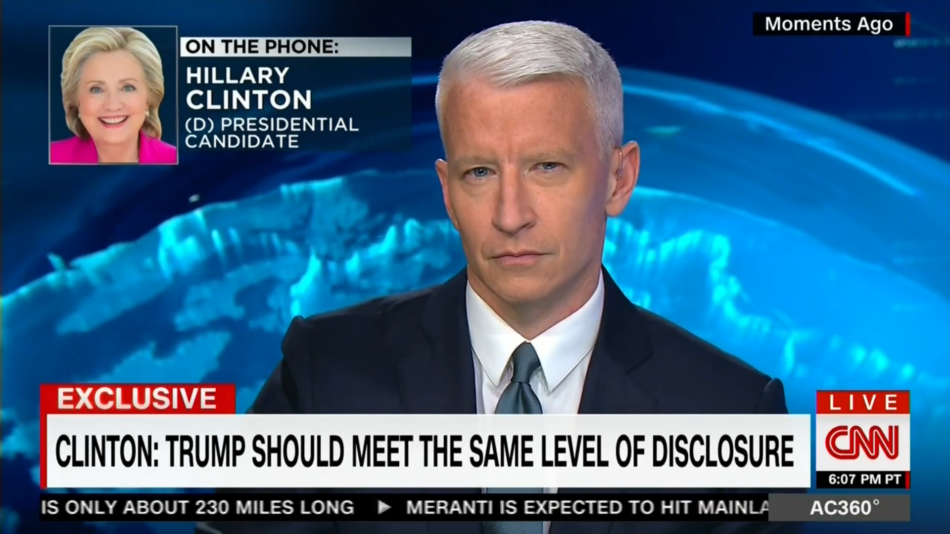 Imagine grilling someone recovering from pneumonia with a scowl on your face and dripping disdain in your voice. That was CNN's Anderson Cooper interviewing a recovering Hillary Clinton. It was abominable.

Wow AC if you had that intensity on any variety of issues with DT you might be doing your job. Come on man.

There's a reason I wrote an article titled R.I.P. Political Journalism. It's because of corporate media spectacles like the one we were treated to by Anderson Cooper, who interviewed Hillary Clinton recovering from a bout of pneumonia the way one would interview an escaped convict.

Anderson Cooper's interview truly exemplifies everything that is wrong with the media right now. https://t.co/omdokuWgdc

When @andersoncooper asked abt "transparency" re disclosing pneumonia, @HillaryClinton's epic eyeroll was powered by our collective disdain.

What's amazing is how Anderson Cooper doesn't even look even a little embarrassed to be doing one of the most embarrassing interviews ever.

I'll conclude with this:

The seething anger and contempt that @andersoncooper, @MLauer and other media figures display toward #Hillary evaporates with #Trump.

Wow. @andersoncooper makes his bones as a reporter by aggressively grilling a woman with pneumonia about her cough. Unreal.