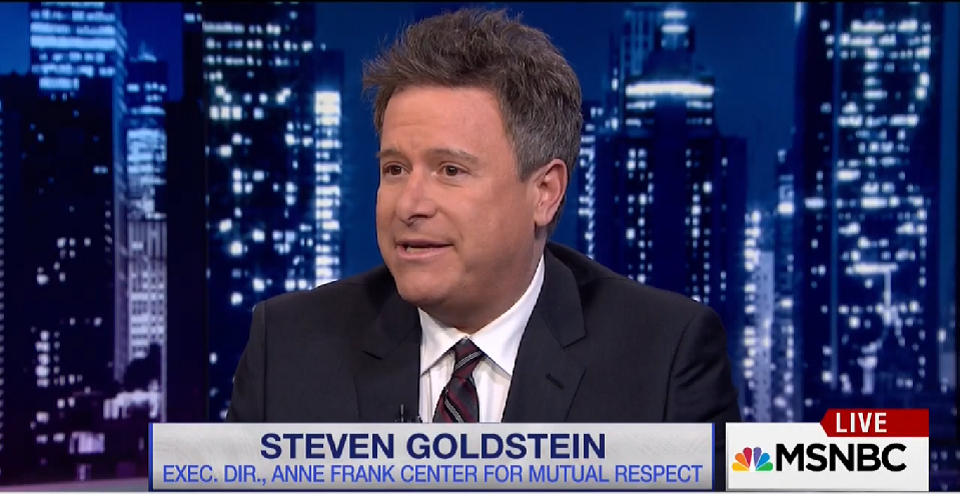 After Donald Trump’s history of antagonism towards Jewish people, the head of the Anne Frank Center warns America that Trump is an "anti-Semite" — and offers a powerful account of the evidence.

On MSNBC's Last Word with Lawrence O'Donnell, Goldstein explained, "Trump quacks, walks, and talks like an anti-Semite. That makes him an anti-Semite." He went on to cite the compelling evidence for his claim, including the position of Steve Bannon in the White House, Trump's hamfisted statements on the Holocaust, and his foot-dragging and milquetoast response to threats of violence against Jewish community centers.

GOLDSTEIN: What's more remarkable about Donald Trump's appearance today was his complete tin ear to the perception — that is accurate — that he is anti-Semitic. There Donald Trump was this morning, and he expected, like Moses, the waters to part because he said anti-Semitism was bad. Donald Trump quacks, walks, and talks like an anti-Semite. That makes him an anti-Semite.

O'DONNELL: What's an example of that?

GOLDSTEIN: For example, he hired Steve Bannon. Steve Bannon, we all know, is a notorious anti-Semite. Donald Trump refused to include Jews in Holocaust remembrance. Denying Jews had a particular hurt in the Holocaust is nothing short of Holocaust denial and anti-Semitism at its worst. This weekend, our organization and others begged Donald Trump, begged him, to comment on the bombing — the bomb threats of JCCs. He wouldn't do it. He wouldn't talk about the desecration of 170 Jewish cemeteries in St. Louis. So what happened today? Lawrence, as you said, he read soullessly this statement, 'Antisemitism is a very bad thing.' Every Jewish person like myself who has a conscience should be shocked. Here's a man who doesn't know how to stick to a teleprompter. Today he stuck to a teleprompter because he probably couldn't say the words from his heart.

Earlier that day, Trump broke his silence on anti-Semitic attacks that have spiked since his election, and said, "The anti-Semitic threats targeting our Jewish community at community centers are horrible and are painful and a very sad reminder of the work that still must be done to root out hate and prejudice and evil."

But the Anne Frank Center was not accepting Trump’s lip service, and issued a statement noting:

The President’s sudden acknowledgement is a Band-Aid on the cancer of Antisemitism that has infected his own Administration. His statement today is a pathetic asterisk of condescension after weeks in which he and his staff have committed grotesque acts and omissions reflecting Antisemitism, yet day after day have refused to apologize and correct the record. Make no mistake: The Antisemitism coming out of this Administration is the worst we have ever seen from any Administration. The White House repeatedly refused to mention Jews in its Holocaust remembrance, and had the audacity to take offense when the world pointed out the ramifications of Holocaust denial. And it was only yesterday, President’s Day, that Jewish Community Centers across the nation received bomb threats, and the President said absolutely nothing. When President Trump responds to Antisemitism proactively and in real time, and without pleas and pressure, that’s when we’ll be able to say this President has turned a corner. This is not that moment.

In the daily White House press conference, Press Secretary Sean Spicer complained about the Center's statement, saying, "I wish that they had praised the President for his leadership in this area."

But Trump has not led the fight against anti-Semitism at all. Trump’s comments come in the wake of graves being vandalized at Jewish cemetery in St. Louis and a White House response to that display of hate that did not even mention anti-Semitism or Jewish people. When Trump was asked by NBC about the crime, he said, "You don’t know where it’s coming from but I certainly hope they catch the people."

It is part of a pattern. Trump’s White House minimized the impact of the Holocaust on Jewish people with a statement on International Holocaust Remembrance Day that also omitted any mention of them. 6 million Jewish people were slaughtered in the Holocaust, and as Senator Tim Kaine pointed out, to minimize that is to engage in Holocaust denial.

During the presidential campaign, Trump and his surrogates repeatedly used anti-Semitic imagery, while Trump had to be pushed to even tepidly condemn the racists and anti-Semites who publicly supported his campaign — and who are now major cheerleaders of his presidency. And he continues to offer bland and reluctant responses to hateful attacks against the Jewish people which ought to receive vociferous denunciation.