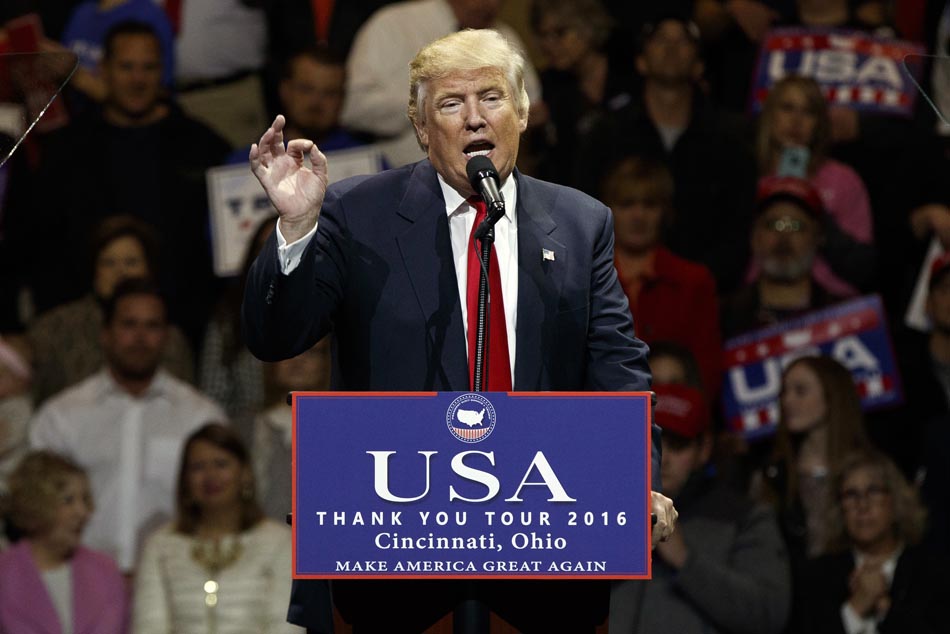 Among the many objectionable aspects of President-elect Donald Trump's Thursday night "Thank You" rally was Trump's return to the use of a phrase with established anti-Semitic overtones, and the media's continued failure to report on it.

President-elect Donald Trump's "thank you" tour kicked off in Cincinnati on Thursday, broadcast live by news networks who appear determined to learn nothing from the 2016 election. Once again, viewers got to hear Trump telling lies about issues like his deal with Carrier, free of any filter providing analysis, context, or fact-checking.

The mere existence of a Trump "thank you" tour is disturbing, and during its inaugural rally, there was no shortage of other disturbing things, like the return of "lock her up" chants, some of which received critical coverage in the national media.

What you regrettably will not be hearing much about, though, is Trump's continued use of a phrase that has an established and undisputed anti-Semitic history:

There is no global anthem, no global currency, no certificate of global tip. We pledge allegiance to one flag and that flag is the American flag.

As we noted when Trump used the phrase in describing his first 100 days agenda, the Anti-Defamation League has urged Trump to stop using “America first” because of its anti-Semitic use preceding WWII, but instead of jettisoning the term, he is now using it to define the “core principle” of his agenda.

"America First" was the name of a group determined to keep the United States out of World War II, and which came to be defined by the anti-Semitic views of Charles Lindbergh, who said: "The Jews are one of the principle forces attempting to lead the U.S. into the war. The Jews' greatest danger to this country lies in their large ownership and influence in our motion pictures, our press, our radio, and our government."

Trump has also been made aware of the phrase's ugly roots by reporter David Sanger, on multiple occasions.

“To me, America First is a brand-new modern term. I never related it to the past,” Trump said. People had pointed out that it was, as Trump put it, “a historical term,” but he denied the resonance. He might as well have said, as his campaign at first had about Melania Trump’s plagiarized speech, that “America First” used “common words.” It may be that he really doesn’t care that some people hear disturbing echoes. He may not have thought a thing when the Anti-Defamation League asked him to stop using the phrase, in March, and redirected fifty-six thousand dollars in donations from the Trump family to anti-bullying and anti-bias causes.

He knows what the words invoke, and he continues to use them anyway. To define his agenda.

Yet outside of a handful of TV news panel hits and pieces of online commentary when Trump first began using it during the primaries, its use has been almost completely ignored.

The fact that Trump is now using it at raucous victory rallies in front of cheering crowds is all the more reason the media should be reporting on his continued use of the term, not less. These choices matter.