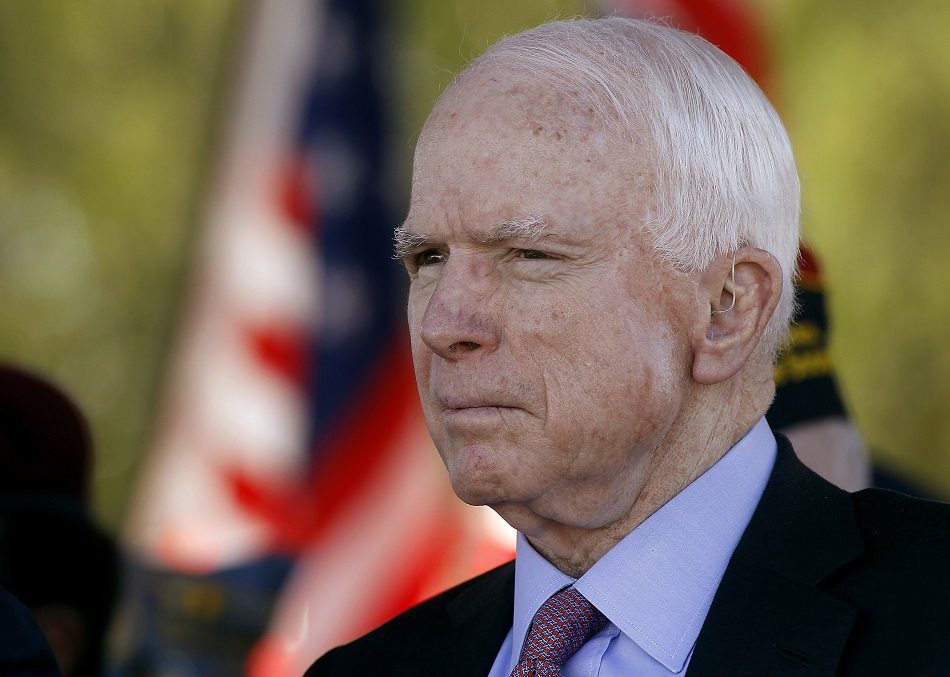 (AP Photo/Ralph Freso, File)
Get The American Independent in your inbox

Republicans are once again trying to block a special election — this time, for a Senate vacancy that hasn't even happened yet.

Some Republicans in Arizona seem to be dismissing the possibility Sen. John McCain, who is battling cancer, might leave the Senate due to illness. But in a suspicious coincidence, they just wrote legislation that would prevent a special election this year, which would only be necessary if the seat were vacated.

According to the Associated Press, the bill was originally intended to address the special election process for House races after Rep. Trent Franks resigned in disgrace for sexual harassment. But Republicans in the state Senate slipped an "emergency clause" into the bill, changing the deadline for a Senate special election from May 31 to March 31.

That would mean if McCain resigns, Republican Gov. Doug Ducey could appoint a replacement to last through 2020.

This ploy is just the latest in a series of panicked moves by Republicans to cancel elections they fear losing.

Earlier this year, Wisconsin Gov. Scott Walker tried to deny special elections in Assembly District 42 and Senate District 1, fearing the vacant Republican seats might flip blue. He gave up only after he was ordered to hold elections by three separate courts, including a judge he appointed.

Republicans are already defending the open seat of departing Sen. Jeff Flake, one of their most vulnerable races. Having both of Arizona's Senate seats open at once would be a nightmare for them, in no small part because they're struggling with candidates.

There is Rep. Martha McSally, a lockstep right-wing partisan best known for planting fake social media posts praising herself. There is former state Sen. Kelli Ward, who has called for abolishing all federal gun laws, wants America to exit the U.N., and drew fire recently for mocking military service. And there is disgraced ex-Maricopa County Sheriff Joe Arpaio, who ran self-described "concentration camps" in the Arizona desert, had to be pardoned by Trump for criminal contempt of court, and whose platform includes continuing to argue President Obama's birth certificate is a fraud.

Arizona Republicans will struggle to get just one of these candidates through a general election, let alone two.

In fact, a similar situation is already unfolding in Mississippi. Sen. Roger Wicker already has a regularly scheduled election, but Sen. Thad Cochran resigned on April 1 due to poor health. With both the state's Senate seats on the ballot this fall, the odds of white supremacist state Sen. Chris McDaniel being a nominee are up — and so are the odds of a Roy Moore-style implosion that hands a deep red seat to Democrats. As a consequence, some election forecasters no longer rate Mississippi as safe for the GOP.

The GOP's woes in the House are evident, as even districts Trump won by 20 points become competitive and flip blue. But now the Senate, once thought to be a lock for Republicans, is also shifting in ways that erode the GOP's advantage. Between primary chaos in states where Republicans hope to beat Democratic incumbents, and formidable Democratic candidates making a play for seats held by Republicans, the GOP can no longer be sure they will walk away in November with either chamber.

And as the last-ditch maneuvers in Arizona prove, Republicans know they cannot afford any more shakeups.