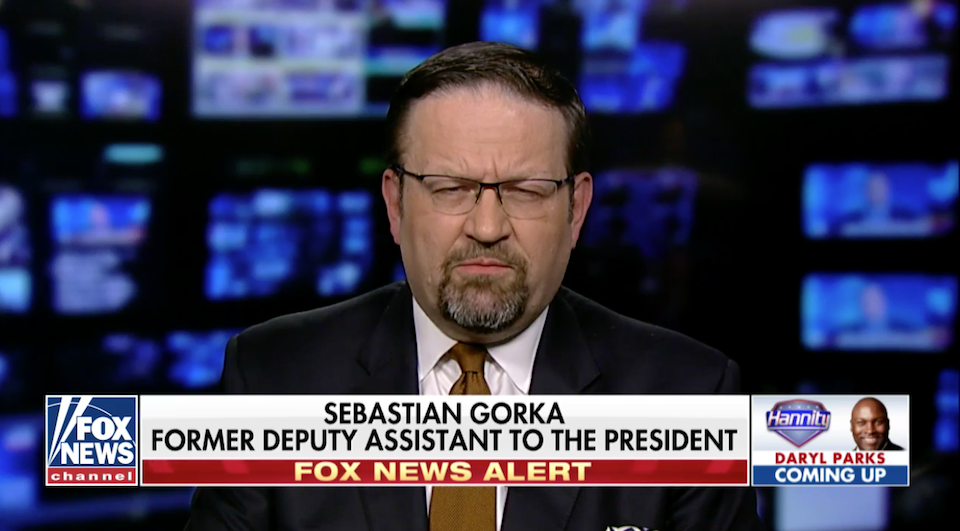 (Screenshot/Fox News Video)
Get The American Independent in your inbox

As voters reject the racism of Trump's White House, Fox News is embracing it.

Months after having his security clearance stripped, former Trump adviser and Nazi sympathizer Sebastian Gorka has just been hired by Fox News as a "national security strategist."

"Joining us now is Dr. Sebastian Gorka. And I can officially announce today he is a Fox News national security strategist," Hannity said. "[W]elcome to the Fox family."

Gorka thanked Hannity for being a "great supporter."

"You've been a great supporter, not only of myself, but of the administration and the president, and it's great to be back as part of the superb Fox family," Gorka said.

A Fox News spokesperson confirmed the hire to Talking Points Memo after Hannity announced it on his show, and Gorka celebrated the news on Twitter tonight.

Gorka worked as a counterterrorism adviser for the Trump White House until August, when Chief of Staff John Kelly reportedly revoked his security clearance while Gorka on vacation.

His ouster from the White House came after a series of reports detailing his relationship with a Nazi-allied party in Hungary.

According to The Forward, Gorka is a member of the "quasi-Nazi' group Vitézi Rend. While Gorka denied the reports, two leaders of the organization said he's a "sworn member" of the group, and another told Buzzfeed that he's a current member.

After leaving the White House, Gorka announced that he would be joining Trump's former chief strategist Steve Bannon at Breitbart News, where he worked prior to joining the Trump administration.

Hiring a card-carrying Nazi is never a good move, but Gorka's hire comes at a particularly strange time — just a day after Americans at the polls roundly rejected the racism that Fox News is now embracing.