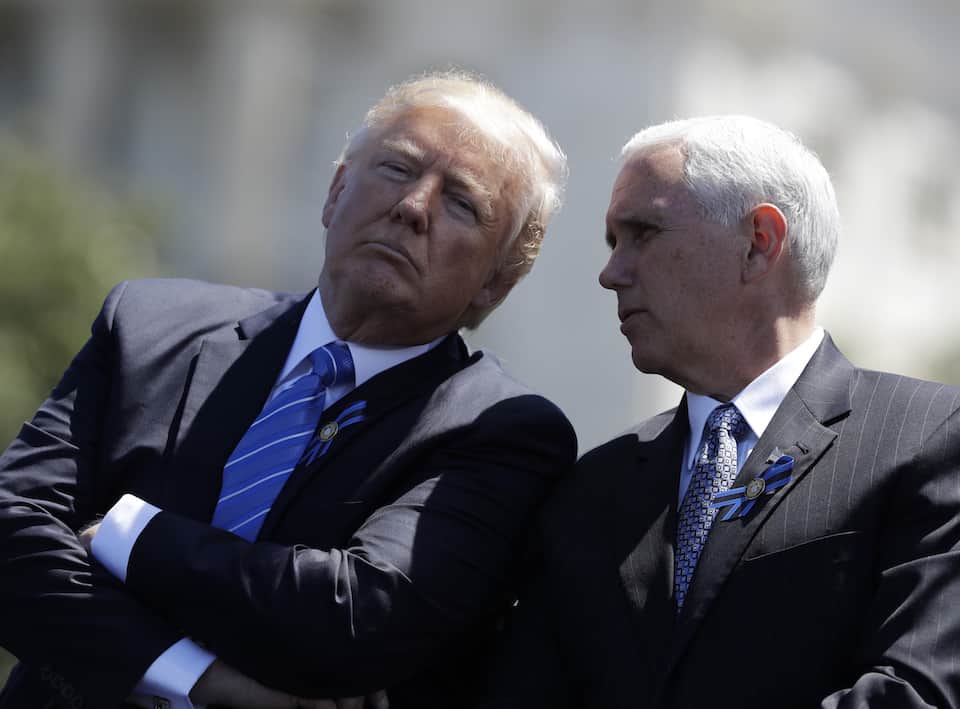 [See update] White supremacists are terrorizing Charlottesville, Virginia, with scattered rebukes from Republicans — and not a word yet from Donald Trump or Mike Pence.

As white supremacists in Charlottesville continue to push their bigoted, hate-filled message with violent attacks, Democrats and progressives are speaking out loudly and clearly against this dangerous ideology and action.

Sadly, in 2017, speaking out against hate appears to be a largely partisan affair, with very few Republicans offering public repudiations — and at the time of writing, no statements or even tweets from Donald Trump or Mike Pence, though Trump's wife Melania did call for people "to communicate w/o hate in our hearts."

But a single tweet from the first lady is not a substitute for action from the Executive Branch.

In the meantime, plenty of Democrats have made it clear how repugnant the words and actions of these neo-Nazis are, and how crucial it is to reject their toxic world views.

The acts and rhetoric in #Charlottesville over past 24 hours are unacceptable & must stop. A right to speech is not a right to violence.

The vile & bigoted display of hate in #Charlottesville has no place in America. We stand against white supremacy wherever it appears.

Racism, bigotry & hate are wrong - in Charlottesville & anywhere else in this country. We should be a better people than that.

Really hard to choose between the medieval times codsplay nazis and the Abercrombie preppy nazis invading my hometown. pic.twitter.com/lrZXGIb5fp

To the white nationalists descending on Charlottesville: go back to where you came from. Hate has no place in Va. https://t.co/N20CRZ3Fr4

Most Americans I know, march like this. #Charlottesville #UniteForCivilRights pic.twitter.com/DPdPyBnCnZ

And Vermont senator Patrick Leahy hit Trump for his silence:

While Trump and Pence as of now have remained silent, they could instead follow the lead of their own party, as some Republicans are notably speaking out, including Ronna McDaniel, the chairwoman of the GOP:

The hate & bigotry on display in #charlottesville is dangerous & cowardly.

The views fueling the spectacle in Charlottesville are repugnant. Let it only serve to unite Americans against this kind of vile bigotry.

Their tiki torches may be fueled by citronella but their ideas are fueled by hate, & have no place in civil society. https://t.co/himqTMBQnH

While the Virginia Republican Party has not issued a response at this time, a local chapter put out this statement:

Let's be very clear about what's happening in #Charlottesville. There is nothing conservative about white nationalism or racial supremacy. pic.twitter.com/hioUwOPFoO

And GOP candidate Ed Gillespie, who supports Confederate statues, did eventually issue his own statement:

The lack of response from the White House is disturbing, but not surprising, since Trump employs a white supremacist as his chief adviser and a Nazi sympathizer in the White House.

That embrace of such fringe thinking, coupled with the utter lack of response, many hours into the conflict, is a silence that truly speaks volumes.

UPDATE: Trump finally issued a response — on Twitter, of course — to the horrific violence, offering a nonsensical, formulaic tweet, complete with punctuation errors:

We ALL must be united & condemn all that hate stands for. There is no place for this kind of violence in America. Lets come together as one!

If "there is no place" for white supremacist hatred "in America," perhaps Trump could start the process of condemning it by cleaning his own house.