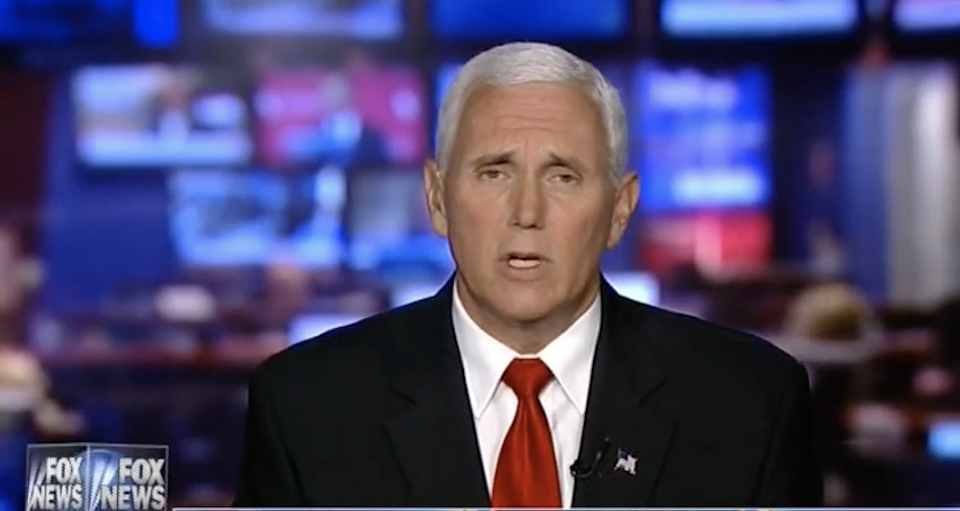 Despite Donald Trump's continued failure at leading the world, Mike Pence told a Fox News audience that the world is "grateful" for Trump.

Donald Trump has rapidly offended America's closest allies by pushing them away and behaving poorly on the global stage, but Mike Pence insisted that the world is "grateful for his presidency."

Pence made the strange comment in an appearance on Sean Hannity's show on Fox News. Hannity has positioned himself as the leading Trump sycophant on the most pro-Trump outlet in the world.

Despite Trump's stumbles and fumbles, Pence told substitute host Laura Ingraham, "What I keep hearing from leaders around the world is how grateful they are that America is leading again on the world stage."

Pence also claimed that his trips abroad are "representing the president," reflecting a habit of members of the Trump administration to say they are working for Donald Trump and not the United States.

PENCE:  I was in Europe myself representing the president earlier this year. What I keep hearing from leaders around the world is how grateful they are that America is leading again on the world stage. I think whether it was the speech in Saudi Arabia a few weeks back, whether it was that historic speech today in Warsaw, leaders around the world, while we may have our differences, I think welcome a president of the United States who's committed to embracing that role to be the leader of the free world.

Trump's tenure has been notable for his failure to continue America's traditional leadership role on the global stage.

Former President Barack Obama highlighted this when slamming Trump's decision to pull away from the Paris climate accords. Obama wrote that the decision marked an "absence of American leadership" and that Trump had made America join "a small handful of nations that reject the future."

World leaders rebuked Trump for the provocative act, including a joint letter from the leaders of France, Germany, and Italy. The leaders of Canada, Belgium, and China also issued statements criticizing his behavior. This is in addition to a global outcry from ordinary citizens, including right here in America.

Trump has cozied up to Russia's Vladimir Putin, back slaps and all, while turning a blind eye to Putin's aggression toward America and its allies, including attempts to influence elections in both France and Germany.

The entire world laughed at Trump as he struggled to explain what NATO is or how it works, while he botched simple interactions like shaking hands with France's prime minister.

In his exchange with Ingraham, Pence did not name the mysterious world leaders are who are hailing Trump, but they sound as imaginary as the stories Trump so frequently makes up.