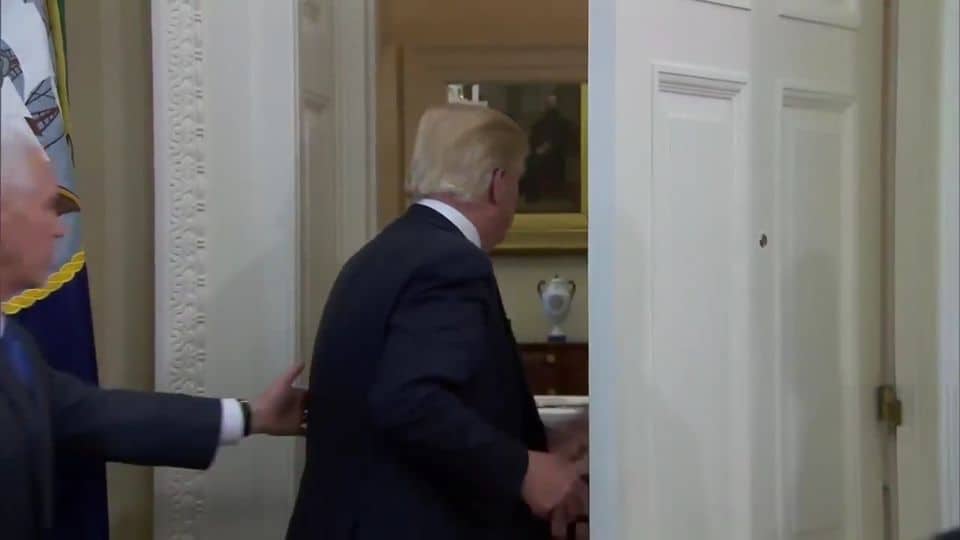 YouTube/Rafael Rivero
Get The American Independent in your inbox

Donald Trump walked out of the Oval Office as he was peppered with questions about Michael Flynn offering up testimony in exchange for immunity in ongoing Congressional probes. But in his haste to leave, he skipped out on signing the executive order for which he had summoned the press.

Donald Trump summoned the press to the Oval Office for a signing ceremony for an executive order. But just as reporters began to ask questions about Michael Flynn's offer to testify to Congress about ongoing Russian investigations, Trump ambled out of the room, ignoring their calls.

Earlier in the day, Trump had tweeted that Flynn "should ask for immunity because the investigations are a "witch hunt."

CBS reporter Major Garrett had already dogged Press Secretary Sean Spicer about the tweet at a briefing, and here he attempted to ask Trump about it, as well.

Trump ignored the question, and awkwardly made his way out of the room. But in the process, he failed to actually sign the executive order on his desk that had been the subject of the event in the first place. Mike Pence walked back and took the papers off the desk, bringing them to Trump — rather than having to deal with the questions about Flynn the reporters continued to ask.

after @MajorCBS asks about Flynn, Trump leaves signing ceremony without signing executive orders. Pence went and picked it up from desk

TRUMP: Thank you, everybody. You're going to see some very, very strong results, very, very quickly. Thank you very much.

GARRETT: Mr. President, in your tweet, were you trying to tell the Justice Department to grant immunity to Michael Flynn?