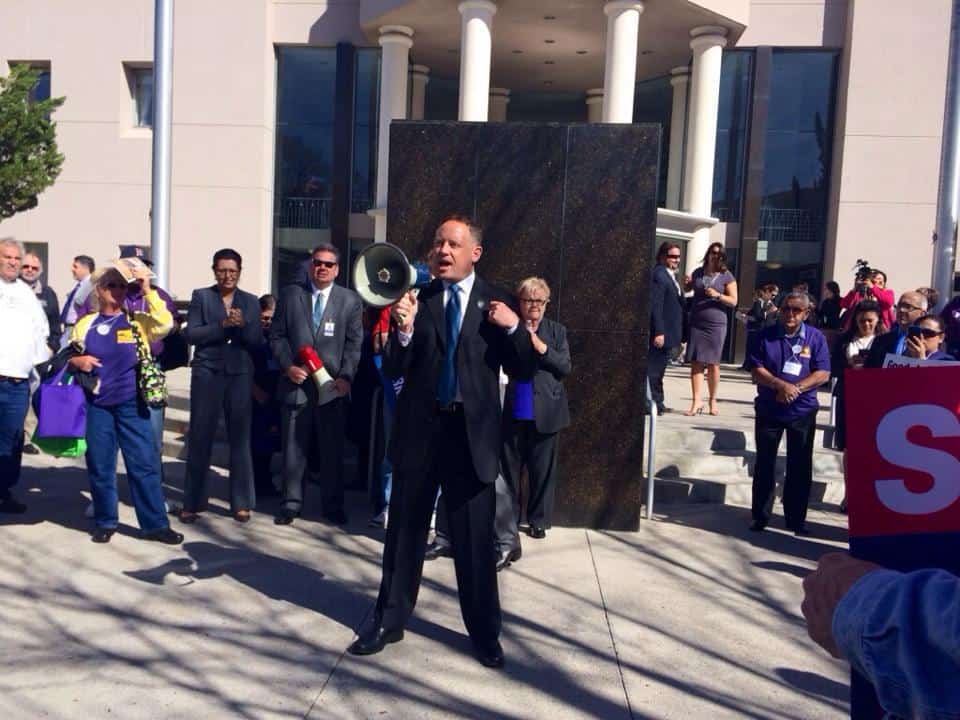 Michael Sprinkle via Facebook
Get The American Independent in your inbox

While Republicans in Washington are fighting to take health care away from millions, state Assemblyman Mike Sprinkle tried to expand health care in Nevada.

Local elections matter, and no one can attest to that more than Nevada’s Mike Sprinkle.

In 2016, the Reno firefighter and paramedic ran for his third term in the Nevada Assembly. Hopes were high, but Sprinkle and his fellow Democrats faced an uphill road, given that Republicans controlled Nevada’s Assembly, Senate, and the governor’s mansion.

While most of the country woke up on November 9th shocked and horrified, the Silver State provided a much-needed silver lining: Democrats won up and down the ballot, taking control of both the Assembly and the Senate (there was no gubernatorial election, thus no chance to flip that office).

Sprinkle knew that this was his moment. Buoyed by a Democratic majority, Sprinkle led the effort to bring health care to more Nevadans.

"I really, truly believe and have for a long time that health care is a right and responsibility for the government to provide," he said. "This is a way for us to do that."

The plan that Sprinkle refers to is his Medicaid for All bill, which some dubbed "Sprinklecare." With a simple 4-page bill, Sprinkle laid out a plan to open the state’s Medicaid program to any Nevadan who wanted to buy into it, no matter their income status. The bill passed on the last day of Nevada’s legislative session.

While Democrats now controlled the legislative branch, the governor's office is still occupied by Republican Brian Sandoval. And though Sandoval embraced Obamacare’s Medicaid expansion, helping hundreds of thousands of Nevadans get access to health care, Trump’s influence seems to have gotten the best of him: In mid-June, the governor vetoed Sprinklecare.

After the veto, Sprinkle took to Facebook to assure his constituents that the fight was far from over, saying:

I will continue to believe that health care is a right and not a privilege and to make sure your government provides you with that right. Though today's veto is highly disappointing my job as your legislator is to make sure you have access to affordable and quality health care. As an elected representative I take that responsibility very seriously and will work hard in the future to protect all people's right to health care, not just the privileged.

While Sprinkle is a voice for the people, Nevada’s senior U.S. Senator, Dean Heller, is fighting hard for the rich, the pampered, and the privileged.

At the same time Sprinkle was fighting to expand health care, Heller was busy being the most reliable rubber stamp for the Trump agenda that anyone can find.

When facing a bill that would rip away health care from millions of people across the country, and thousands of Nevadans, the tentativeness from the GOP’s "weakest Senator" is sadly unsurprising.

Heller can’t make up his mind on whether or or not to support Planned Parenthood, which the GOP bill defunds.

Heller says that he won’t pull the rug from under 200,000 Nevadans who received health care under the Medicaid expansion, yet hasn’t closed the door to supporting a bill that would do just that. In fact, in 2015, Heller voted for more than $1.3 TRILLION in Medicaid cuts — well beyond what is in the Senate plan.

When in front of the camera, Heller says that he can’t support the bill in its current form. But behind closed doors, he told conservatives that he "will do everything I can to get to a yes."

The people of Nevada spoke loud and clear. When 2016 rolled around, and people saw the benefits of Obamacare, residents elected leaders like Sprinkle to expand, not take away, health care.

In the end, will Heller listen to the people of his state or succumb to the bidding of Kentucky’s Mitch McConnell?

Standing up for constituents shouldn't be a difficult decision. Indeed, it is the primary job of legislators. Fighting back takes backbone, and it takes integrity. While those traits are clearly evident in Sprinkle, they are much harder to find in Heller.

Mike Sprinkle is fighting so that women in Reno continue to have access to Planned Parenthood. He is standing up for children in Sparks with asthma so they can visit a doctor.

No matter where Heller’s “spineless equivocating” leads him, Nevadans should be proud that Mike Sprinkle will be there to stand up and fight back.

Stand Up Fight Back is a weekly series that focuses on Democrats at the federal, state, and local level who are taking real, concrete actions to further the resistance and fight for progressive values.