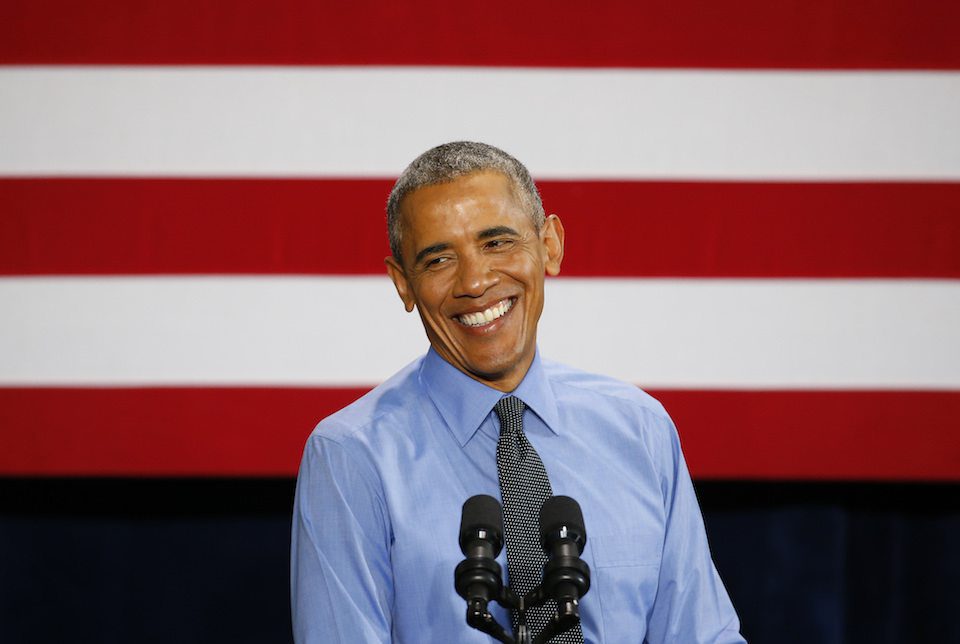 As Donald Trump increases attacks on his predecessor, a poll shows Obama would defeat Trump by more than 10 points.

Donald Trump has been hurling baseless accusations of criminal activity at former President Barack Obama, falsely accusing him of illegally surveilling Trump's associates while he was still in the White House and demanding he be hauled in front of Congress to answer questions about his actions.

"If I were a Senator or Congressman, the first person I would call to testify about the biggest political crime and scandal in the history of the USA, by FAR, is former President Obama," Trump tweeted last week. "He knew EVERYTHING. Do it @LindseyGrahamSC, just do it. No more Mr. Nice Guy. No more talk!"

Republicans are worried that Trump's pushing of his "Obamagate" conspiracy theory, bringing Obama back to the forefront of the presidential election, is perilous for his reelection hopes, Politico reported.

And a new poll bears that out, showing that Obama would crush Trump in a hypothetical matchup.

According to the results of the survey published by Public Policy Polling, in a theoretical head-to-head race, Obama would beat Trump 54% to 43%, with 3% of respondents saying they weren't sure.

Of course, Obama cannot run again after serving two terms as president. But the poll results show that elevating Obama may not be helpful in Trump's efforts to defeat Obama's vice president, Joe Biden, the presumptive Democratic presidential nominee.

Polling currently shows Trump trailing Biden less than six months before Election Day. Biden leads both in national polls and in polling conducted in key swing states that, if the polls are accurate, would hand Biden an Electoral College victory if the voting were held today.

Trump and his surrogates have been throwing everything they can think of at Biden in an effort to find an attack that sticks.

The effort to get Ukraine to announce an investigation into Biden and his son, Hunter, resulted in Trump's impeachment.

Trump has also smeared Biden's cognitive abilities, with his campaign launching a website on Monday that mocks Biden and accuses him of mental decline.

And in an escalation of the ugly attacks, Trump's two adult sons have baselessly insinuated that Biden is pedophile.