Home National Behind Trump's back, Pence is telling reporters he'll ease up on them...
Support progressive journalism.
Donate today 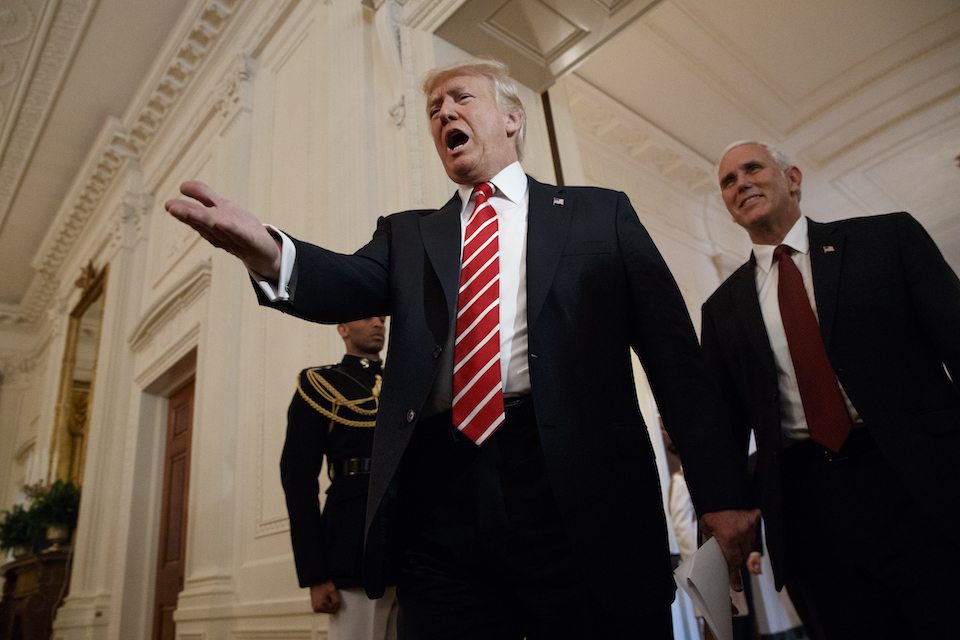 Mike Pence bashes the media in public while Donald Trump is watching, but in private, he is undermining Trump's war on the press for his own political future.

In public, where Donald Trump is watching him and tweeting, Mike Pence has played along with his media bashing. But behind closed doors, where connections are being made that could make or break a future presidential run, Pence is whispering sweet nothings into reporters' ears.

If Pence wants to challenge Trump in 2020 — or take over for him should he not finish his first term, thanks to a cavalcade of scandals — Pence needs the media to be on his side. A new report reveals the latest evidence of Pence's shadow presidential campaign includes outreach to the media and assurances that he wouldn't bash them as much as Trump does.

While the mainstream press has given Trump an open microphone over the course of his short political career, and has even hired pundits for the sole purpose of cheering him on when his fellow Republicans would not, Trump has still attacked them on a near-daily basis. His small core group of supporters are so familiar with his baseless allegations of "fake news" and "crooked media" that they have become a standard part of his song and dance at his rallies.

But Pence is assuring the media that he won't be as mean as Trump is. Politico reports that while Pence complained about media coverage during his speech to the Trump faithful at this week's Phoenix campaign rally, "Pence's office provided POLITICO with some of Pence's recent statements that seem to soften the president's stance."

His office gave the outlet copies of remarks he delivered at a NATO summit in February, where he said, "Rest assured that both the president and I strongly support a free and independent press."

Pence's team also highlighted a Washington Post article contrasting Trump and Pence on the press, which included a quote from Pence remarking, "I’ve been an advocate of the free and independent press for a long time."

The behind-the-scenes posturing is further evidence that Pence is playing the long game. He created his own PAC to dispense money to potential supporters, he has assembled a political team on the vice presidential payroll, and he has been wooing big dollar donors at his official residence — all while barnstorming swing states and speaking to conservative groups.

Pence continues to protest reports of his campaign-style moves, but his actions undermine his rhetoric. He has repeatedly admired Trump's "broad shoulders," but his actions indicate he views them as runway for his own political ambitions to take off.