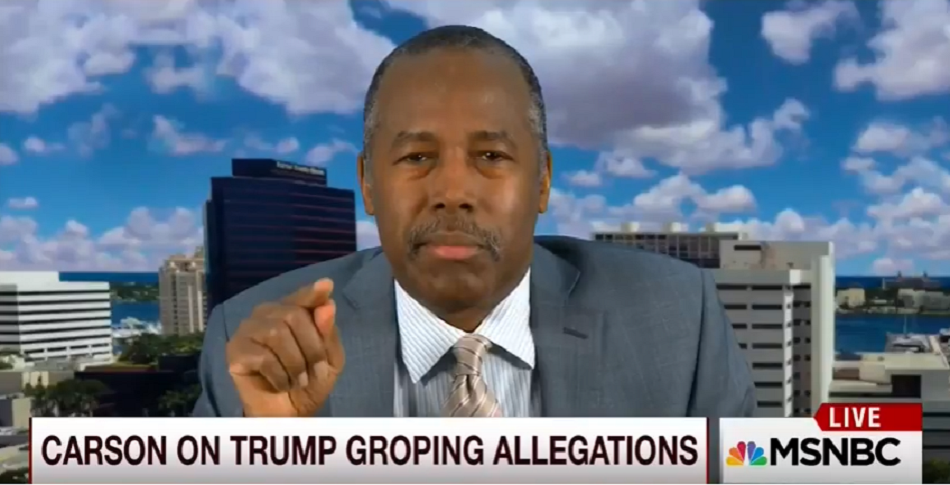 First Lady Michelle Obama delivered an extraordinary speech on Thursday that perfectly laid out the moral and practical stakes of electing a self-professed groper to the presidency. On Friday morning, Dr. Ben Carson vehemently insisted on MSNBC that the accusations against Trump just don't matter.

Earlier in the interview, Carson repeated the absurd talking point that Trump could not possibly have groped a woman on an airplane because first-class seats had fixed armrests at the time of the incident, which would have impeded his access to her body. (In fact, many airplanes did indeed feature movable armrests in first-class seating back then.)

Kay circled back to this statement to ask Carson if he believes the women are lying.

Carson tried to evade the question, and when Kay persisted, Carson actually asked Joe Scarborough if he would please turn off her microphone, a request he would make three times in the space of one minute.

Dr. Ben Carson: Hey, can you turn her microphone off, please?

Ben Carson: Turn her microphone off so I can talk.

Joe Scarborough: No, no. It's a simple question. Yes or no. Do you believe these women are lying or not? Nobody is trying to paint you as a bad guy. We just want an answer, straight talk.

Ben Carson: It doesn't matter whether they're lying or not.

Katty Kay: Of course, it matters.

Ben Carson: Listen, it doesn't matter whether they're lying or not. What matters is that the train is going off the cliff. We're taking our eye off of that and getting involved in other issues.

Here was Carson, the only Republican candidate who was ever able to wrest the polling lead from Trump during the primaries (albeit briefly), arguing that it simply does not matter if we elect someone who profoundly disrespects women to the presidency, then demonstrating precisely why it matters by trying to silence a woman who disagrees with him.

I'm not sure that ordering the silence of a woman is a great way to win back women voters who are fleeing Trump. Just a suggestion. https://t.co/CCT5RSHIyd

Unfortunately this is exactly the kind of bullying women are all too used https://t.co/XlshzX2VWR

Trump has led the way in normalizing and laying bare behavior that used to be relegated to the subtext of social conservatism. Carson is yet another Republican eagerly following along, offering a clear example of the perils about which Michelle Obama warned.