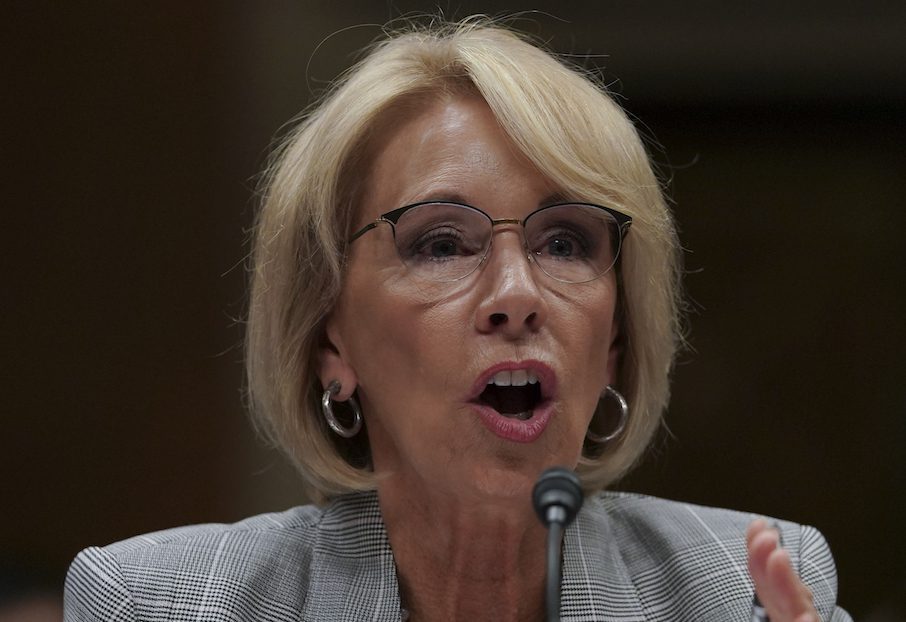 Betsy DeVos is looking for a way to get guns into schools for Trump, and she wants to use taxpayer funding to do it.

Education Secretary Betsy DeVos is considering a plan to swipe federal taxpayer dollars meant for academic enrichment in the nation's poorest schools — in order to buy guns and ammo for teachers.

The move would be so radical that it would be the first time any government agency purchased weapons without a congressional mandate.

How will DeVos pay for it?

According to the New York Times, DeVos would divert federal taxpayer dollars "intended for academic and enrichment opportunities in the country's poorest schools" to the purchase of weapons in schools.

Under current guidelines for the grant being eyed by DeVos, schools are encouraged to use these federal funds on things like mental health counseling and dropout prevention programs.

The National School Superintendents Association "absolutely opposes using federal funds meant to support the health and well-being of children for arming teachers," said Sasha Pudelski, an official with the organization.

But the Trump administration doesn't look out for educators, especially when the gun lobby is involved. The NRA spent $30 million to help elect Trump, and now the group is looking to cash in for their corporate gun manufacturing donors.

Congress has made clear, through other laws, that it absolutely does not want to use federal tax dollars to purchase weapons in schools, according to the Times. In March 2018, Congress passed a $50 million school safety bill that specifically forbade the purchase of weapons with the money.

But DeVos may have found a loophole. The 2015 education bill, called the Every Student Succeeds Act, does not specifically prohibit buying weapons and ammunition for schools. (However, even the lead Republican on that bill, Tennessee’s Sen. Lamar Alexander, has come out against arming teachers.)

Sen Patty Murray (D-WA), a top-ranking Democrat on the committee overseeing the Department of Education, blasted the idea, saying, "It's well past time Secretary DeVos stops bowing down to the gun lobby and starts following the law."

After the Times posted their story, a Department of Education spokesperson said the idea of spending federal funds on guns came from a Texas official, but did not deny the department is considering the plan.

According to Education Weekly, the Federal School Safety Commission, led by DeVos, "has heard arguments about the merits of having armed school staff protect students." However, Education Weekly also notes she told Congress that the commission "is not examining the role of guns in school violence."

Sen. Chris Murphy (D-CT), a longtime advocate of gun safety, announced he is introducing an amendment to an education spending bill to prevent DeVos from moving forward with this plan. "My lord - we can't let this happen," he said.

Trump's idea to arm teachers was panned by the public, rejected by teachers, and not even supported by law enforcement professionals. But public outcry may not stop DeVos from loyally carrying out Trump's extreme, NRA-backed scheme to flood schools with guns.

DeVos has never been shy about furthering Trump's extremist agenda. She has been on the front lines of rolling back civil rights protections in schools. And she has been a champion of the far-right fringe in her efforts to turn a blind eye to discrimination against transgender students.

Taking money away from academic enrichment programs in poor schools to support an NRA scheme to flood schools with guns is just one more way DeVos is making our schools less safe.