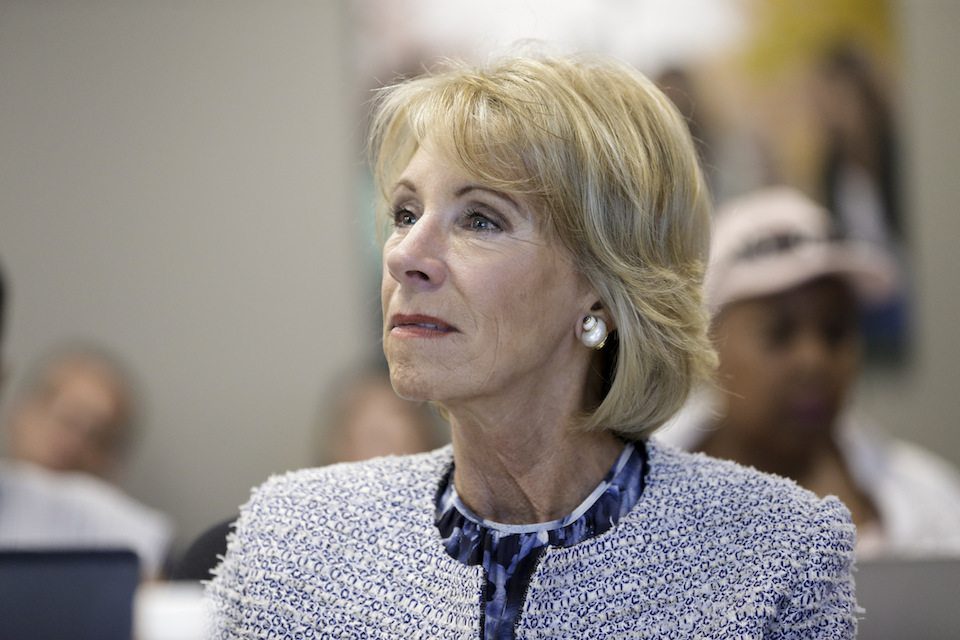 Betsy DeVos wants to carry out the NRA's agenda in America's schools.

Secretary of Education Betsy DeVos met with the survivors of the Parkland school shooting earlier this week, and by all accounts it was not much of a visit. Amazingly, she came away from the meeting concluding that schools should have even more guns.

In an upcoming CBS interview, DeVos says letting teachers carry guns "should be an option for states and communities to consider," and that "for those who are capable this is one solution."

At her confirmation hearing, DeVos infamously said schools need guns to protect against grizzly bears. Apparently, this is now her solution to school shootings as well, and it is one Trump himself has brought up to deflect from the idea of gun control.

DeVos made the comments calling for more guns on the heels of a visit to Marjory Stoneman Douglas High School, where she held a "listening session" with survivors of the Valentine's day school shooting.

Clearly, she didn't do much listening.

As the Parkland survivors have repeatedly stated, they vigorously oppose letting teachers carry weapons in schools because they don't believe it will improve school safety.

"Can you imagine the mass chaos and hysteria?" David Hogg has said of the plan. And Emma Gonzalez has stated that rather than weapons, schools need more "supplies, books, and therapists."

Also opposed to the plan to arm teachers are gun violence experts, 56 percent of Americans, and a majority of teachers themselves. The idea of turning mass shootings into mass shootouts does not make most people feel safer.

DeVos, a right-wing megadonor, never had any qualifications for Secretary of Education other than her political activism in failed school privatization schemes. In office, she has dismantled civil rights protections in education, from campus rape survivors to disabled K-12 students to defrauded for-profit college students.

And yet now, DeVos wants to turn around and give schools a right that educators and students did not ask for: the right to make mass shootings even worse.