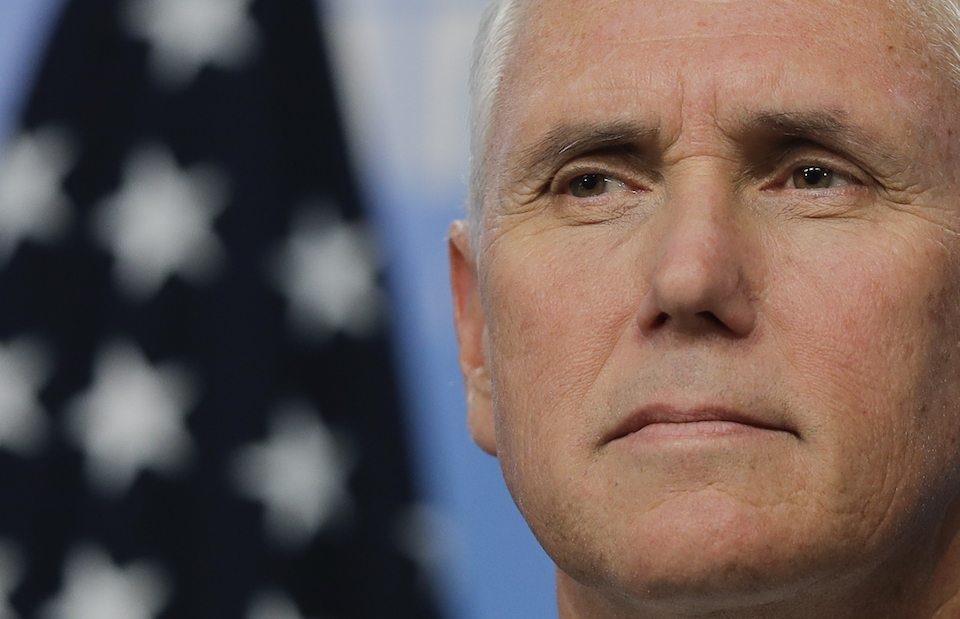 (AP Photo/Natacha Pisarenko)
Get The American Independent in your inbox

Big business is spending heavily to lobby Mike Pence on a host of important issues, bypassing Donald Trump and reinforcing Pence's clandestine preparations to take over the presidency.

Companies with billions of dollars on the line are circumventing Donald Trump and directly lobbying Mike Pence, seeking regulatory favors and influence from him as if he were in charge and at the top of the presidential ticket.

The International Business Times reports that companies that have lobbied Pence "have spent tens of millions of dollars in total federal lobbying" this year. They include "health care and drug companies, Wall Street firms, oil and gas interests," as well as the issues of health care, defense spending, and net neutrality. Conveniently, Pence has been a major backer of the issues on which he has been lobbied.

Lobbying on the issue of health care is illustrative of how business interests simply went around Trump and dealt with Pence.

Aflac got a direct pipeline to Pence when the company hired his former chief of staff, Bill Smith. He then lobbied Pence on health care policy.

Blue Cross and Blue Shield came calling to Pence as well, and lobbied him to include provisions in the Republican bill that would have repealed Obamacare if it had passed.

The investment in lobbying Pence, rather than targeting Trump, made sense: Pence was on Capitol Hill involving himself in the passage of legislation, while Trump tweeted and watched Fox.

Similar arrangements occurred when lobbyists sought relaxed rules around banking, energy, and telecommunications, again and again bypassing Trump and dealing with Pence, who is involved in conservative legislation in a manner that Trump will never be.

At the same time business has been courting Pence, he has been diligently setting himself up to take over the presidency if it ends prematurely as a result of multiple scandals or with a primary challenge in 2020.

He has gone so far as to create a PAC for himself separate from Trump's re-election campaign — an unprecedented move for a vice president — while wooing donors at his official residence and barnstorming the country to raise funds and awareness for fellow conservatives and Republicans.

Pence is scheduled to headline an event with the Koch Brothers, who are key funders of the right-wing movement.

Pence has even enlisted a dog in his shadow campaign. Harley, an Australian shepherd, has been his companion as he flies across the country speaking to possible future supporters. By contrast, Trump is the first president in 150 years not to have a pet. The Obamas had their dogs Bo and Sunny, while the Bushes had Barney and Miss Beazley.

When The New York Times reported on Pence's obvious posturing, and other Republicans considering his candidacy, he and his team pushed back furiously on the story. Perhaps too strongly. Trump has not been shy about blasting members of his team who receive more publicity than he does — it may be why Steve Bannon was fired — and Pence surely wants to avoid being on the receiving end of a Trump tweetstorm.

Whether it is being directly lobbied by business, flying around America to meet with supporters, or just walking the dog, Pence is continuing to position himself for a takeover sooner rather than later.