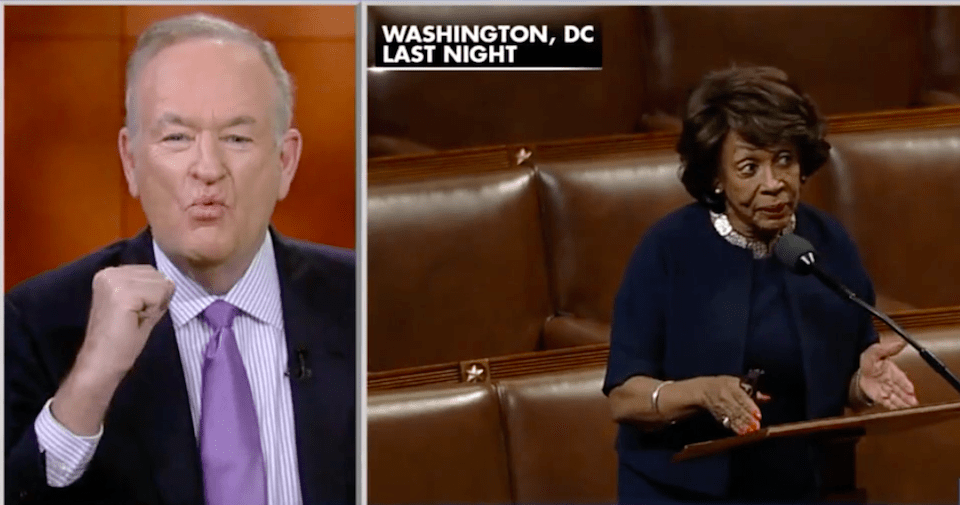 California Democratic Representative Maxine Waters has been one of the strongest and most consistent critics of Donald Trump and his administration since day one. In a blatant attempt to dismiss and demean her, Fox News' Bill O'Reilly made a racist, sexist jab at the Congresswoman. But he cannot silence her.

Representative Maxine Waters (D-CA) has been a consistent and stentorian voice against Donald Trump and his administration from the beginning. She called him out as a danger to the country because of his ties to Russian President Vladimir Putin and has been vocal about the need for an independent investigation into those ties and possible collusion.

She has also been explicit about impeachment, saying definitively that Trump is "not going to be there for four years" and that Trump ought to "get ready for impeachment."

Waters has put in decades of service to this country, having been first elected to office in California in 1976. And she is determined to protect the nation and the American people from the Trump administration's abuses.

And Trump's cronies are equally determined to dismiss and demean her, no matter to what offensive lows they must sink to do so.

Media Matters called out Fox News personality Bill O'Reilly for making a patently racist and sexist jab at Waters for her hairstyle — a type of microaggression that Black women have often had to confront.

O'REILLY: I love her.

EARHARDT: She says — wait, why do you love her?

O'REILLY: Maxine Waters should have her own sitcom, okay? Alright? It's just — I just — people get angry with Maxine Waters. I want more of it.

WATERS (video clip): We have suffered discrimination. We have suffered isolation, and undermining, but we stand up for America, oftentimes when others, who think they are more patriotic, who say they are more patriotic, do not [O'Reilly smirks, mouths 'That's right!"] When we fight against this president and we point out how dangerous he is for this society and for this country, we're fighting for the democracy. We're fighting for America. [O'Reilly pumps his fist, mouths 'Right on!'] We're saying to those who say they're patriotic but they turned a blind eye to the destruction that he's about to cause this country, 'You're not nearly as patriotic as we are."

KILMEADE: So what does that mean, Bill? We've been listening all morning —

O'REILLY: I didn't hear a word she said, I was looking at the James Brown wig. [laughter] Do we have a picture of James Brown? It's the same one!

DOOCY: And he's not using it anymore.

O'REILLY: I didn't say she wasn't attractive. I love James Brown. But it's the same hair James Brown, the Godfather of Soul, had!

EARHARDT: So he had girl hair?

O'REILLY: Whatever it is, I just couldn't get past.

It is not that racist statements from O'Reilly are unexpected. On the contrary, they are par for the course with him. But as MSNBC's Joy Reid notes, this moment was appalling even for him:

A man accused of spousal abuse and sexual harassment is attacking a member of congress in crass racial and gender terms on a major network. https://t.co/2d2ldkCv92

And his history only serves to exacerbate the bigotry of this "joke." O'Reilly has been called out for this kind of rhetoric, and yet, by making such a crude and blatantly racist comment about a member of Congress on live television, he is proving that any admonishments he has received in the past did not sink in at all. And his facial expressions and mocking reactions to Waters' speech evince a clear and repugnant glee at engaging in that very same behavior once more.

O'Reilly may have felt the urge to attack Waters because she has been such a powerful force against the Trump administration. But if she has not been silenced by Trump himself or any members of his cabinet or party, she will certainly not be moved to back down by someone like O'Reilly.