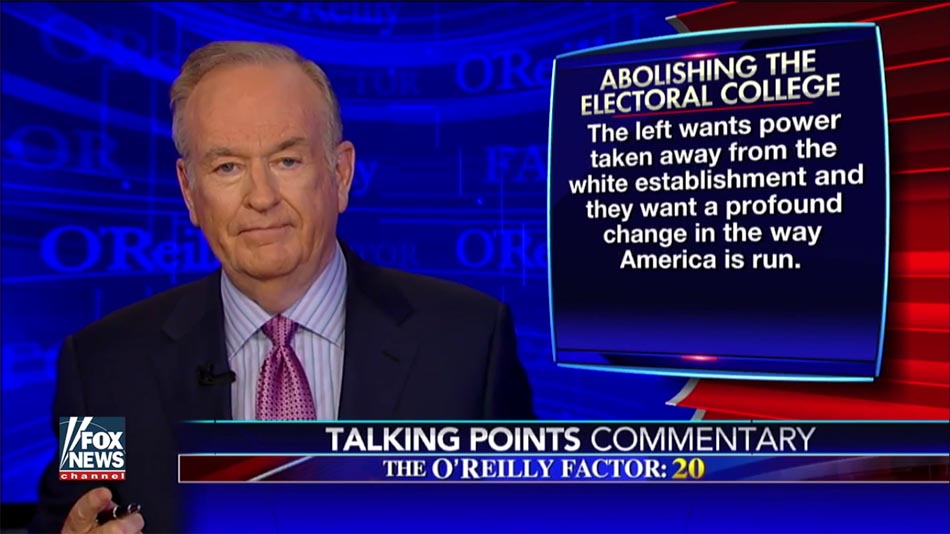 Fox News host Bill O'Reilly was already barely masking his white supremacy, but now he has sunk even lower by explicitly defending the Electoral College on the basis of protecting the "white establishment" from the diverse electorate that supported Hillary Clinton.

Even as they lecture Democrats to "get over it," conservatives (including Donald Trump) continue to obsess over the fact that Hillary Clinton clobbered Trump in the popular vote.

Clinton currently holds a 2,864,974 popular vote lead over Trump. This has so burrowed its way into conservatives' heads that it apparently drove Fox News host Bill O'Reilly to shed whatever thin veil remained over his white supremacist views.

Since O'Reilly is wont to claim he was "taken out of context" by his detractors, here is the full segment (emphasis mine):

O'REILLY: Abolishing the Electoral College: that is the subject of this evening's Talking Points Memo. After Hillary Clinton won the popular vote, the left in America is demanding that the Electoral College system, put into place in 1787, be scrapped. But there's a hidden reason for this.

As we reported, even though Secretary Clinton won the popular vote by 2.8 million, the progressive state of California provided all of that margin, Clinton defeating Trump there by about 4.3 million votes. So if the Electoral College were abolished, presidential candidates could simply campaign in the nation's largest states and cities — New York, L.A., Chicago, Houston — and rack up enough votes to pretty much win any election. That's what the left wants. That's what they want. Because in the large urban areas and blue states like New York and California, minorities are substantial. Look at the landscape: Philadelphia, Dallas-Fort Worth, Miami — in all of these places the minority vote usually goes heavily to the Democrats. Add to that New York City, L.A., Chicago, San Francisco — don't really have a national election anymore, do you? You have targeted populations.

Newspapers like the New York Times and the L.A. Times have editorialized to get rid of the Electoral College. They well know that neutralizing the largely white rural areas in the Midwest and South will assure liberal politicians get power and keep it.

Talking Points believes this is all about race. The left sees white privilege in America as an oppressive force that must be done away with. Therefore, white working-class voters must be marginalized, and what better way to do that than center the voting power in the cities? Very few commentators will tell you that the heart of liberalism in America today is based on race. It permeates almost every issue. That white men have set up a system of oppression. That system must be destroyed. Bernie Sanders pedaled that, to some extent Hillary Clinton did. And the liberal media tries to sell that all day long. So-called white privilege: bad. Diversity: good.

If you look at the voting patterns, it's clear that the Democrats are heavily reliant on the minority vote. Also on the woman vote. White men have largely abandoned the Democrats and the left believes this is because of racism, that they want to punish minorities, keep them down. So that's what's really going on when you hear about the Electoral College and how unfair it allegedly is.

If you are accustomed to the usual varnish that coats white supremacy, you could be forgiven for imagining scare-quotes around "white establishment," but there were none. You might have also thought you imagined it when O'Reilly decoded "urban areas" by pointing out that "minorities are substantial" in them. You did not.

O'Reilly has a very long history of making poorly-coded or even barely-coded racist remarks, but this bit of honesty is different. The "substance" of O'Reilly's argument is not that popular elections are wrong in principle — he is not complaining about Trump winning 7 of the 10 most populated states, after all. Rather, he is explicitly complaining about the influence of "minorities" against "the white establishment."

Some liberals and independents might find this sort of thing refreshing because the ditching of coded language simplifies conversations, but the danger of this phenomenon far outweighs that possible benefit. The normalization of white supremacy has real consequences that hurt real people.

That Trump has emboldened O'Reilly to take this stand for the "white establishment," that Trump's national security advisor feels emboldened to meet with a political party that was literally founded by Nazis, that Trump feels emboldened to praise his supporters as "vicious" and "violent" — these things endanger people, and the more they are normalized, the greater and more frightening that danger becomes.

O'Reilly and his colleagues are not fringe figures. They are mainstream conservatives with the ability to poison millions of American minds. Even though there are new and important Trump scandals every day, we must not forget the destructive foundation of racism and white supremacy upon which his entire movement is built.