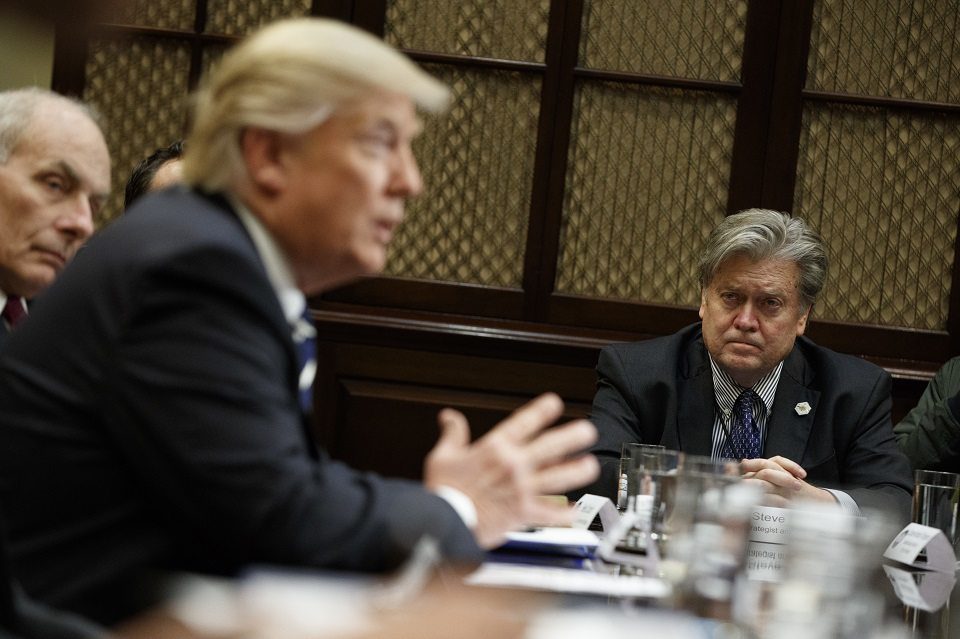 Several of Donald Trump's closest advisers have ties to white supremacist and neo-Nazi groups. In the wake of the Charlottesville horror, the calls for Trump to cut ties with them are growing louder than ever.

From the outset of his presidency, Donald Trump has staffed his inner White House circle with people intimately tied to hate groups and white nationalism.

There is chief strategist Steve Bannon, the former head of Breitbart, who has championed the so-called "alt-right" and wants to curb due process for immigrants.

There is Stephen Miller, who rubbed shoulders with neo-Nazi Richard Spencer at Duke University and attacked the poem on the Statue of Liberty while advocating Trump's plan to cut nonwhite immigration.

And there is Sebastian Gorka, who claims white supremacists are "not the problem," refuses to acknowledge Islam is a religion, and received a medal from a Hungarian group with historical ties to Nazi Germany.

There have been alarm bells sounded about all of these men from the moment Trump hired them. But the urgency has grown in the wake of the deadly white supremacist riots in Charlottesville, and Trump's subsequent inability to issue a basic, straightforward statement condemning violent acts by Nazis.

Americans deserve to know that white nationalists, white supremacists, and neo-Nazis are not in a position to influence U.S. policy. In this time of tumult in our country, Americans deserve a leader that will bring us all together and denounce those who seek to tear us apart.

Most of the members of these caucuses are Democrats, but it is no longer only liberals who are calling for Trump to fire his white supremacist advisers.

According to a report from The New York Times, Fox News owner and right-wing media mogul Rupert Murdoch has personally urged Trump to cut Bannon loose.

And short-lived former White House communications director Anthony Scaramucci, who was fired after making an extremely graphic comment about Bannon to a reporter, has stated that in order for Trump to accomplish anything, "he has to move away from that sort of 'Bannonbart' nonsense."

Even some Republicans who have not definitively called for the white nationalists to be fired, like Florida Rep. Carlos Curbelo, have suggested Trump should "stop listening" to them so much.

Every day, Trump's choice to keep white nationalists at his side is looking more and more disastrous — not only for the country at large, but also for Trump's own political prospects.