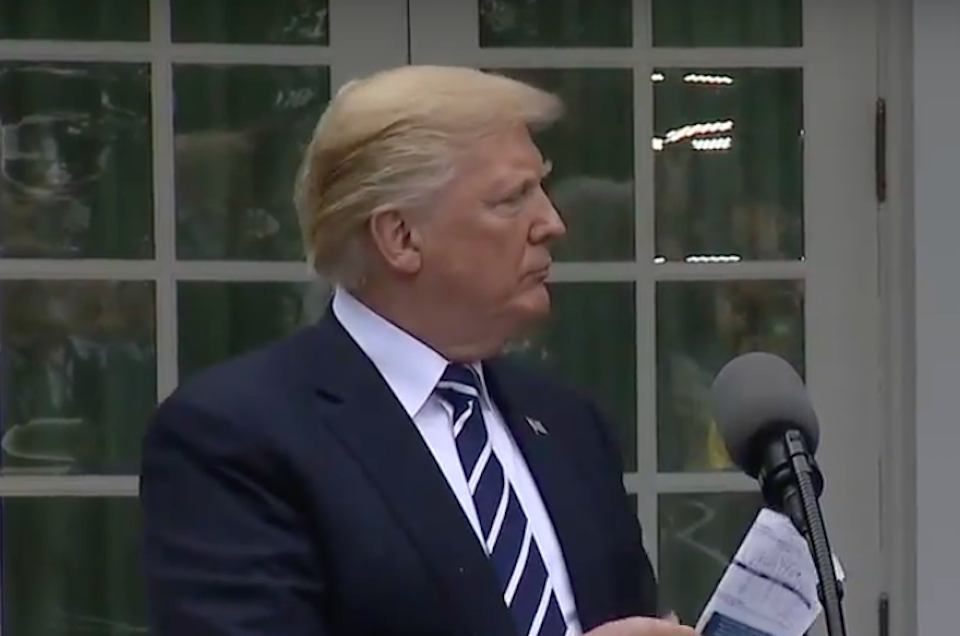 Donald Trump brushed off a question from a black reporter about police-involved shootings to continue his racist attacks on protesting NFL players.

Donald Trump refused to answer a question posed by a black reporter about the police-involved shootings that prompted the protests that have popped up at NFL stadiums. Instead Trump reiterated his previous opposition to the demonstrations, while ignoring the underlying issue.

In a hastily organized press conference in the White House rose garden, reporter April Ryan of American Urban Radio Networks pointed out to Trump that police involved shootings are "the crux of why [NFL players] are taking knee" at games.

Despite Ryan's repeated citation of police shootings in relation to the issue, Trump ignored her. Instead, he reiterated his previous, inaccurate comments as Senate Majority Leader Mitch McConnell (R-KY) looked on and smiled. Trump simply proclaimed that "it is very disrespectful to our country when they take a knee during our national anthem."

TRUMP: It is very disrespectful to our country when they take a knee during our national anthem.

RYAN: What about the police —

TRUMP: It is very — [holds up his hand] just hear it, hear it. It is very disrespectful to our country when they take a knee during the national anthem, number one. Number two, the people of our country are very angry at the NFL. All you have to do is look at their ratings and look at their stadiums. You see empty seats where you never saw ’em before. Lot of people are very angry at it. It is highly disrespectful, they shouldn’t do it. Thank you very much everybody, thank you. [walks away]

RYAN: What about the police-involved shootings?

Trump has made the silencing of black NFL players one of the central issues of the first year of his presidency. He has made multiple public comments and tweets about it, and even took note of the issue in his most recent weekly presidential address.

Trump, who has demonstrated disrespect toward the flag while on a military base, even personally called and pressured an NFL owner to get players to stop exercising their First Amendment rights.

He has done all of this while ignoring the underlying issue motivating the players.

Colin Kaepernick, the former San Francisco 49ers quarterback who began the movement, explained why he was protesting in August of 2016.

"I am not going to stand up to show pride in a flag for a country that oppresses black people and people of color," Kaepernick said. "To me, this is bigger than football and it would be selfish on my part to look the other way. There are bodies in the street and people getting paid leave and getting away with murder."

Kaepernick decided to take a knee rather than sit during the anthem out of respect for the song, while still protesting the underlying issue.

Trump has expressed support for white supremacists, backed keeping Confederate memorials intact, and instructed his Justice Department to restore a program that has helped to militarize police.

He won't listen to concerns about police violence, and dismissed a reporter's attempt to have him weigh in from his position of influence about the issue that worries millions of Americans.

Trump has issued a demand to black players, and will not even acknowledge why they are protesting, because he does not want to listen.