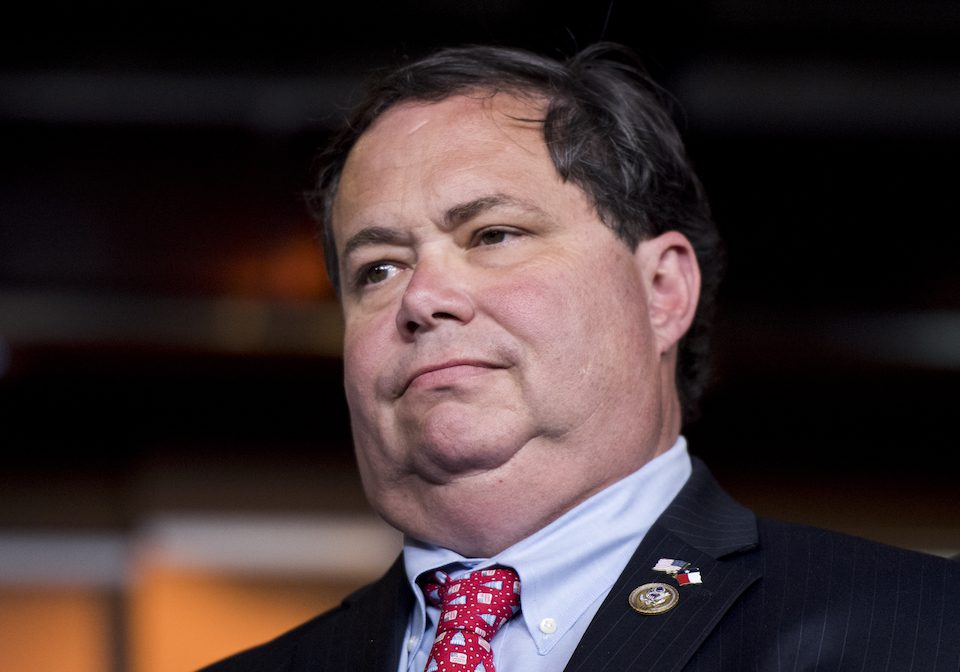 Former GOP Rep. Blake Farenthold says he's not going to repay taxpayers for his $84,000 sexual harassment settlement. You can thank Republican leadership for failing to make him pay up.

Former Republican Rep. Blake Farenthold said on Tuesday that he has no intention of repaying $84,000 in taxpayer funds that he used to settle a sexual harassment lawsuit filed in 2014.

The announcement is just the latest chapter in an unfolding public scandal that began late last year when the House Committee on Ethics announced that it was investigating Farenthold over a 2014 complaint filed by a congressional aide alleging sexual harassment, gender discrimination, and retaliation.

Farenthold ultimately settled the case for $84,000 — and taxpayers footed the entire bill.

When the settlement was revealed to the public, Farenthold pledged that he would "hand a check over this week" for the full amount. That was in early December 2017, and he still hasn't paid back any of the money.

Over the next several months, Farenthold unveiled a string of excuses for why he wasn't paying up, but he always maintained that he would pay the money back. Until now, that is.

On Tuesday, he told ABC News that he has no plans of reimbursing taxpayers for the settlement — and thanks to Republicans' leadership failure, he'll probably get away with it.

When Farenthold hadn't paid the money back after 100 days, Rep. Jackie Speier (D-CA) sent a letter to House Speaker Paul Ryan, putting the pressure on him to hold Farenthold accountable. .

"I urge you to make sure that Congressman Farenthold keeps his promise to the American people and reimburses the U.S. Treasury immediately for the full amount of the settlement," Speier wrote in the March 2018 letter.

With an estimated net worth of at least $5.7 million, Farenthold clearly had the funds to repay taxpayers, but he simply didn't want to — and apparently, Republicans simply didn't care enough to do anything about it.

According to Speier, Republican leaders like Ryan could have done a lot more to ensure that he paid the money back — something that Speier has been calling on Republicans to do for months, to no avail.

"They have the ability to force it," she told HuffPost in March.

But they didn't. And before long, Farenthold announced that he was resigning, just as the House Ethics Committee was expected to rule against him. His abrupt resignation allowed him to escape the results of the investigation — and it also let him walk away without paying back a dime of the $84,000 settlement.

The revelation that Farenthold has no intention of repaying taxpayers comes just a day after he announced that he had secured a new, six-figure job as a lobbyist.

While he's no longer a member of Congress, that doesn't mean there's nothing his former Republican colleagues can do to pressure him to pay up.

As a lobbyist, Farenthold's success will depend on gaining access to lawmakers on Capitol Hill — and if Republicans care about holding him accountable, they can make sure he doesn't get that access until he has paid the money back.

"I would hope Republicans would stand up for what’s right and say he is not allowed in their offices until he pays up," Speier told HuffPost on Tuesday.

Only time will tell, but given that Republicans see no problem lining up behind a man accused of serial sexual assault, it seems unlikely that they'll have a sudden change of heart.