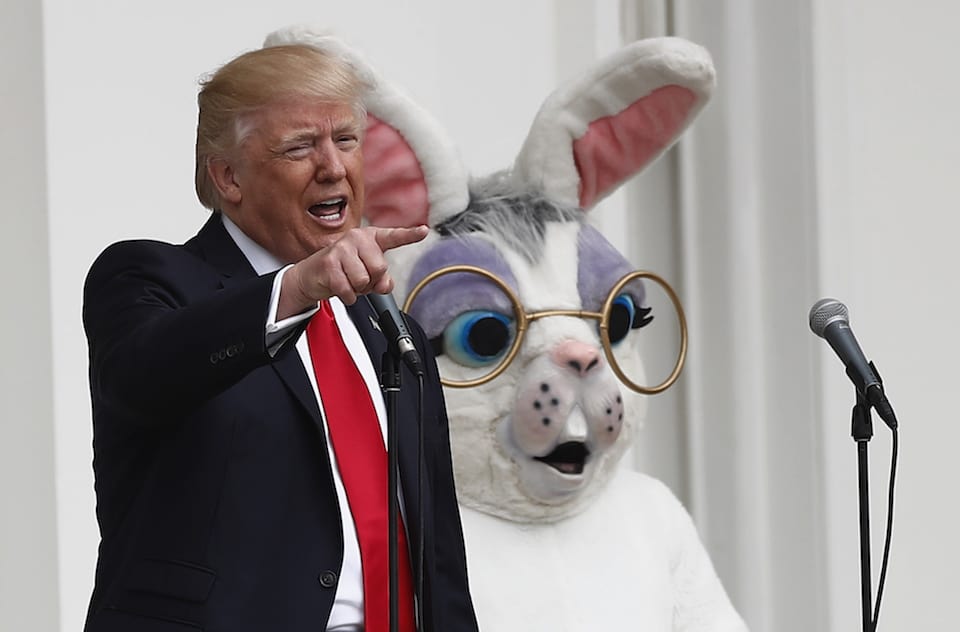 Even as Donald Trump's administration was demanding gratitude for holding an Easter event which has been held for 139 years, they excluded children from the predominantly-Black Washington, D.C., public schools. But they did make sure to have an all-white band on hand to perform slavery-era spirituals and soul music.

Donald Trump kicked off the week by holding his first-ever White House Easter Egg Roll, and forgetting to hold his hand over his heart during the National Anthem.

Nevertheless, the event managed to earn him fair-to-glowing press from the likes of The New York Times and The Washington Post, the latter of which reported that "despite concerns, all seemed to go off without a hitch."

Aside from the thin crowds and Trump's anthem gaffe, however, there was actually a major hitch: Unlike previous Easter Egg Rolls under President Obama, children from the Washington, D.C., public schools were not invited, as a spokesperson for the district confirmed in an email to Shareblue.

It was a glaring absence, unnoticed by a corporate media desperate for a positive narrative, in an event that was notably lacking in diversity, as illustrated by other choices that the Trump White House made. For example, the musical acts that performed on the "Bunny Hop Stage" at the event were almost entirely white — even the ones who stood in for The Jackson Five:

So, here's how you get to hear The Jackson Five at the Trump White House #EasterEggRoll This is The. Whitest. Shit. Ever. pic.twitter.com/ix56XSf5Mm

That same group, the talented Martin Family Circus, would go on to perform a slavery-era spiritual for the mostly-white crowd:

This is no knock on the musical acts, who were talented and taking advantage of a great opportunity. But when your Attorney General is Jeff Sessions, and your president is an overt racist, and your chief strategist is a white nationalist, and you have just excluded children from the predominantly-Black local school district, having an all-white lineup perform slavery-era songs and soul classics is not a good look.

But that is a matter of perspective, because if you are trying to send a message to a certain segment of the country, then such optics might make distressing, but perfect, sense.