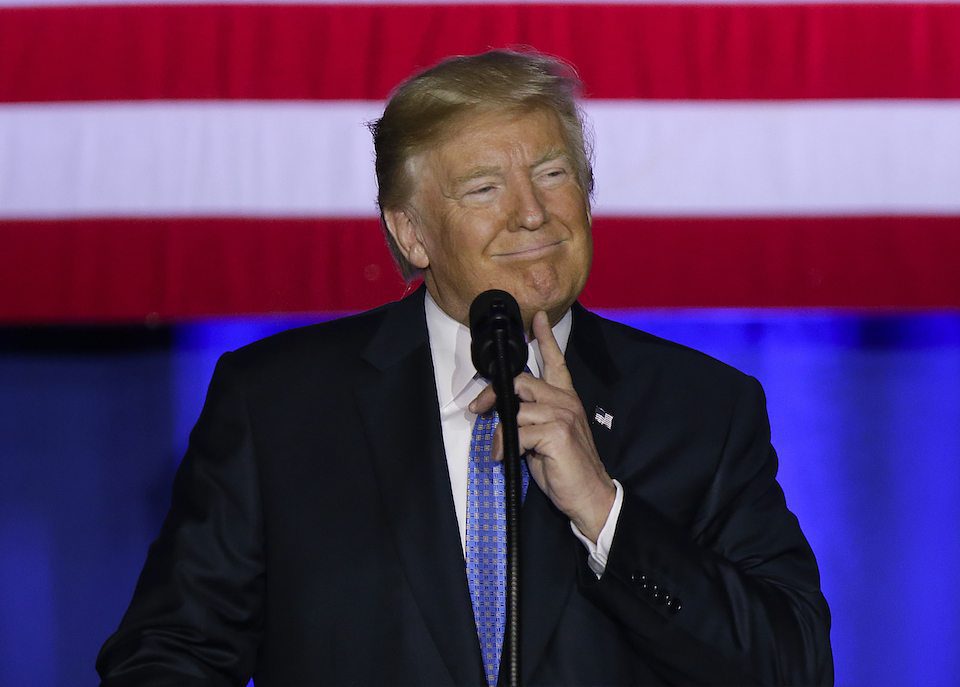 Breitbart is all about white nationalism, not economic populism. And the new GOP tax scheme proves it.

For anyone who still held out hope that Donald Trump’s white nationalist media base cared about economic "populism," and would put the needs of middle class workers above corporate America, the reaction from that corner to the White House’s tax proposal ought to put an end to such thinking.

The plan is a deliberate a giveaway to the one percent — yet the cries of protest from right-wing "populists" have been noticeably muted.

Indeed, Breitbart has been busy dutifully cheering the GOP’s proposal, pretending that it's equitable for working class voters. "The plan calls for lower rates on individuals and families while ensuring that the share of taxes paid by the wealthy does not fall," the right wing outlet claimed this week. (It does not.)

The weak, public capitulation is rather embarrassing considering Steve Bannon, who currently oversees Breitbart and once served as Trump’s chief strategist, previously crowed that Trump was elected in 2016 because of his "Jacksonian populism" and his crusade against "anti-crony capitalism." Bannon has railed about how elites "rule us" in order to "spite what we want to happen" and commit "economic hate crime[s]" against American workers.

And last year during the campaign, a Breitbart headline triumphantly declared, "Why Populism Is Replacing Conservatism, and Why It’s Winning."

But now it’s crickets from Breitbart about the GOP’s giveaway to those supposedly hated elite on the backs of workers.

Indeed, as everyone with a calculator has pointed out, "Wealthy Americans, including several in Trump’s administration, would likely enjoy a financial windfall" from the tax proposal, as the Associated Press put it.

Can’t you just feel that pulsing populism? And don’t forget about the GOP’s burning desire to eliminate the death tax, which only affects multi-millionaires.

So where’s the right-wing media’s "populist" push back? Note that when Breitbart has felt the Trump White House hasn’t delivered a radical, divisive enough message on immigration, it has immediately lashed out and demanded a white nationalist agenda.

But when the administration makes a mockery out of "populist" rhetoric by drawing up a tax blueprint that would reward millionaire and billionaires? Breitbart goes quiet.

"We were told for many months that the ferment in the Republican Party that gave rise to Trump was in part caused by hatred of economic elites," noted Greg Sargent at the Washington Post. "Yet this has suddenly vanished from the discussion at precisely the moment when you’d think more scrutiny should fall upon it."

For real. Any right-wing "populist" who supports Trump’s tax scheme is just in the masquerade business; it’s blindingly obvious who benefits from the plan.

"Taxpayers in the bottom 95 percent of the income distribution would see average after-tax incomes increase between 0.5 and 1.2 percent," according to analysis released on Friday from the Tax Policy Center. "Taxpayers in the top 1 percent (incomes above $730,000), would receive about 50 percent of the total tax benefit; their after-tax income would increase an average of 8.5percent."

Speaking of fake populism, Breitbart’s newsroom has also been very quiet about the wild taxpayer-funded rides Cabinet members have been taking. Among them, EPA head Scott Pruitt, Health and Human Services Secretary Tom Price, and Interior Secretary Ryan Zinke have racked up over $1 million in private and military flight costs. Price’s trips sometimes coincided with visits to family members, and often wrapped him in luxury amenities – for which taxpayers footed the bill.

To date, very little of this concerns the so-called "populists" at Breitbart, who have given the luxury travel scandal story very little attention, and certainly have not widely condemned Price for his egregious behavior.

Nor are they showing any concern about the elitist nature of Trump's tax plan. Apparently, the economic populism of Breitbart is as flimsy as the GOP's defenses of their tax scam.