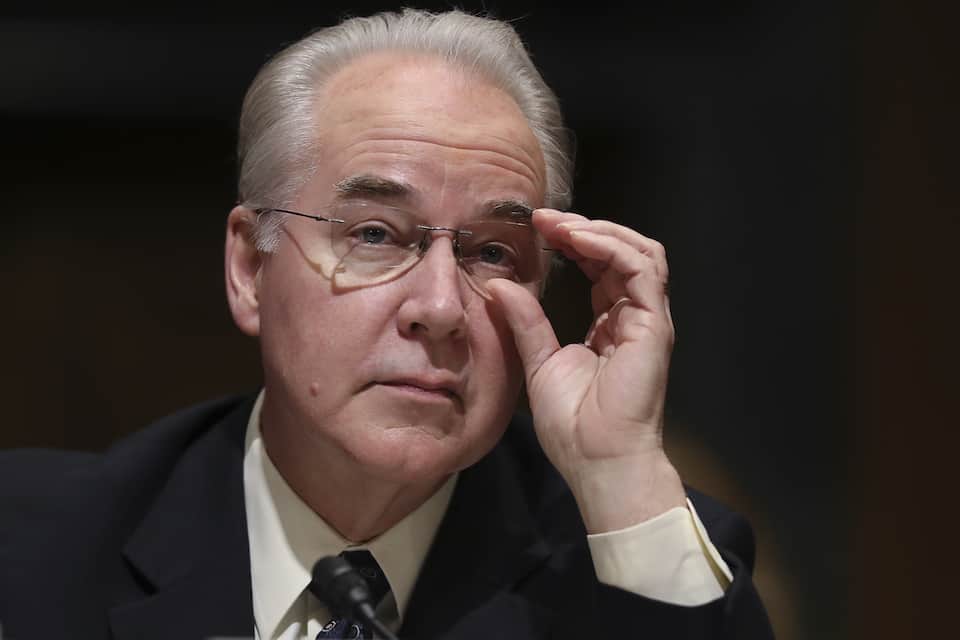 Donald Trump's nomination of then-Rep. Tom Price (R-GA) to head the Department of Health and Human Services couldn't be derailed by multiple stock scandals, but fresh accusations against Price have a Republican ethics lawyer calling on the Securities and Exchange Commission (SEC) to investigate what he calls a "classic insider trading case."

Democrats grilled Rep. Tom Price (R-GA) hard at his confirmation hearing for Secretary of Health and Human Services over a series of questionable stock trades in which he had taken legislative action, as a congressman, to benefit the companies in which he purchased stock. Price was confirmed by the Republican majority anyway, but fresh accusations could land Price in deep trouble.

According to Pro Publica, Price purchased stock in six pharmaceutical companies, then lobbied hard against a rule that would have hurt those companies financially:

What hasn’t been previously known is Price’s personal appeal to the Centers for Medicare & Medicaid Services about the rule, called the Medicare Part B Drug Payment Model.

The same day as the stock trade, Price’s legislative aide, Carla DiBlasio, emailed health officials to follow up on a request she had made to set up a call with Patrick Conway, the agency’s chief medical officer. In her earlier emails, DiBlasio said the call would focus on payments for joint replacement procedures. But that day, she mentioned a new issue.

“Chairman Price may briefly bring up ... his concerns about the new Part B drug demo, as well,” she wrote. “Congressman Price really appreciates the opportunity to have an open conversation with Dr. Conway, so we really appreciate you keeping the lines of communication open.”

The new allegations against Price could have serious consequences, as ethics lawyer Richard Painter, who served under George W. Bush, indicated when he called on the SEC to investigate Price for insider trading:

CUOMO: Tom Price, Health and Human Services secretary, was in the Congress, obviously, in the House of Representatives. There's an allegation he may have made a sale transaction on a drug company right after creating legislation that was favorable to the regulation of that same industry and company. What is your take?

PAINTER: Well, I've worked on insider trading law for almost 30 years. If you have somebody buying the stock on the same day that there are developments happening in Congress that are not public information, that's a classic insider trading case. So, I don't know why the SEC isn't looking into this, maybe they are. This is not a thing that a member of Congress ought to be doing. Move in and out of stocks at the same time they are working on bills that will affect the price of the stocks. There are insider trading issues, as well as conflict of interest issues. I don't know how he got in that mess.

Wherever Price's current troubles lead, they underscore the fact that so many in the Trump administration are guided by their own greed, rather than a desire to serve the public.