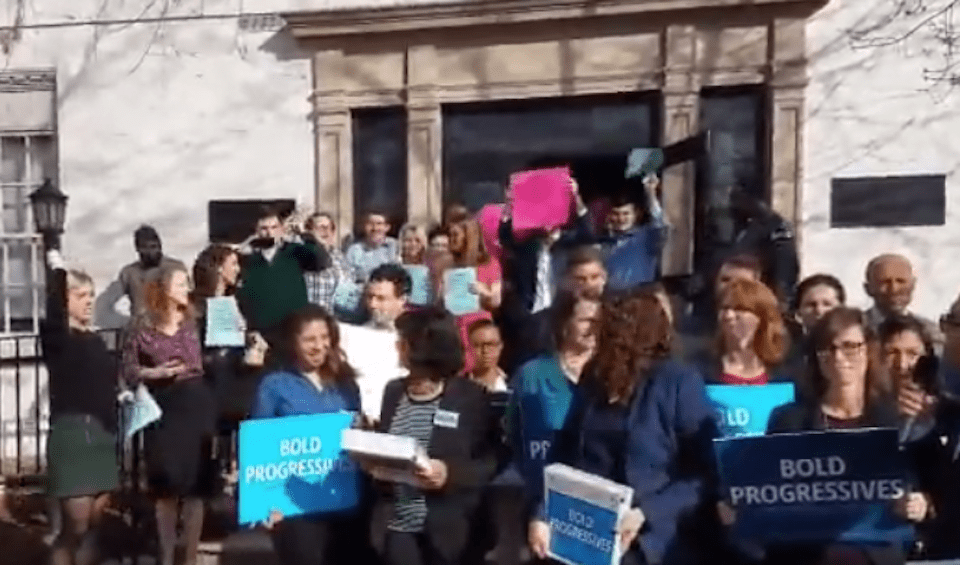 Republicans seized a moment of mourning children who’d been gunned down in Florida to mock opposition to their tax scam.

Republicans have responded to the school shooting in Parkland, Florida, with an incredible callousness. Trump blamed the "classmates" for not stopping the shooting. Texas Sen. Ted Cruz laughed when he was asked what his party would do about gun violence.

But the gold medal for tone deafness might go to a group of Republican National Committee staffers who crashed a rally to honor the Parkland victims on Thursday.

As Tallahassee Mayor Andrew Gillum and activists from the Progressive Change Campaign Committee spoke, the RNC staffers tried to drown them out, chanting "Crumbs! Crumbs! Crumbs!" — an attempt to mock House Democratic Leader Nancy Pelosi, who said any changes in compensation workers were receiving as a result of the GOP tax scam are "crumbs."

Republicans are desperate to use that quote from Pelosi as a weapon against Democrats, with one Senate candidate in Indiana even working it into the name of his bill.

But Pelosi was right. The tax cuts are overwhelmingly going to billionaires and Wall Street investors, and polls show only 2 percent of Americans received raises or bonuses related to the law. Some companies are even using their tax cuts to lay off workers.

Disagreements about tax policy aside, interrupting and mocking people mourning the loss of 17 people to gun violence is outrageously inappropriate, especially since Republicans plan to do nothing to get justice for those children or their families.

"It's horrific enough that Republican lawmakers are responsible for gun policies that lead to murders across the country," said Adam Green, co-founder of PCCC, in a statement to Shareblue Media. "But for Republican National Committee staffers to shout down Florida Governor candidate Andrew Gillum's attempt to show grief and honor this week's shooting victims, that's just abhorrent. The RNC should apologize."

Few things better summarize the current state of the Republican Party than its staffers interrupting a rally for murdered children by mocking Democratic leaders over tax cuts for the rich.