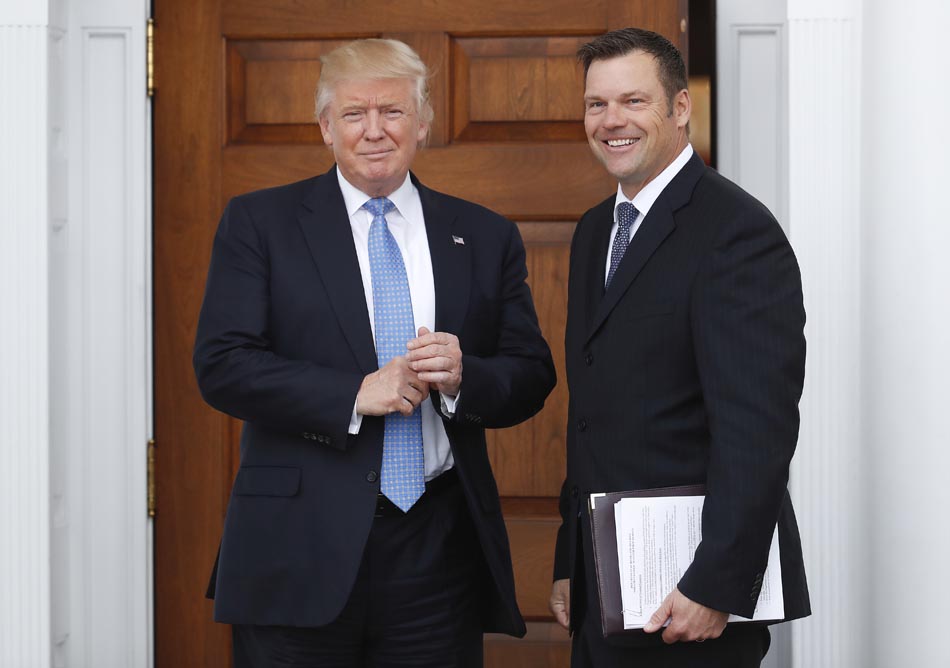 Kansas Secretary of State Kris Kobach, who is in the running to be Donald Trump's Secretary of Homeland Security, met with the president-elect and then posed for the media with his "Strategic Plan for First 365 Days" exposed for the cameras. The carelessness is appalling — and what we can see of the plan itself is even worse.

It should be no surprise that President-elect Donald Trump's potential appointees are just as reckless and incompetent as he is:

Here’s part of the Trump plan for choking immigration. pic.twitter.com/rvEEtIQuIh

And just as indecent. Gripped within the hands of Kris Kobach, a frontrunner to serve as Trump's Secretary of Homeland Security, are pages labeled "Department of Homeland Security Kobach Strategic Plan for First 365 Days." The visible text is profoundly troubling.

“forestall future lawsuits” This is why we need to help the @ACLU. Give like your life depends on it. It does. https://t.co/tBeYVJSVuJ pic.twitter.com/ohM4zKNt7u

While much of the text is obscured, we can make out a few bullet points quite clearly:

• "Update and reintroduce the NSEERS screening and tracking system (National Security Entry-Exit Registration System) that was in place from 2002-2005. All aliens from high-risk areas are tracked." ([Esquire] Editor's note: The system, put in place following 9/11, was shelved in 2011 because it was ineffective, costly, and often seen as harassment.)

• "Reduce the intake of Syrian refugees to zero."

Farther down the page, things are murkier. The next header appears to call for some course of action for a "record number of criminal aliens in the first year." Later, a plan for that famous wall along the southern border with Mexico invokes the PATRIOT Act. What could go wrong?

An NBC News report on Kobach says he "helped write the book on creating a federal Muslim registry in the name of national security" and "is renowned as the mastermind behind the Republican Party's heavily contested anti-immigrant bills and restrictions on voter registration."

This is right in alignment with Trump's campaign, during which he took an extreme hardline on immigration, including a purity test for immigrants and, of course, the wall which became the centerpiece of his platform.

Every indication continues to suggest that Trump will not moderate while president, but will instead double down on his terrifying promises.