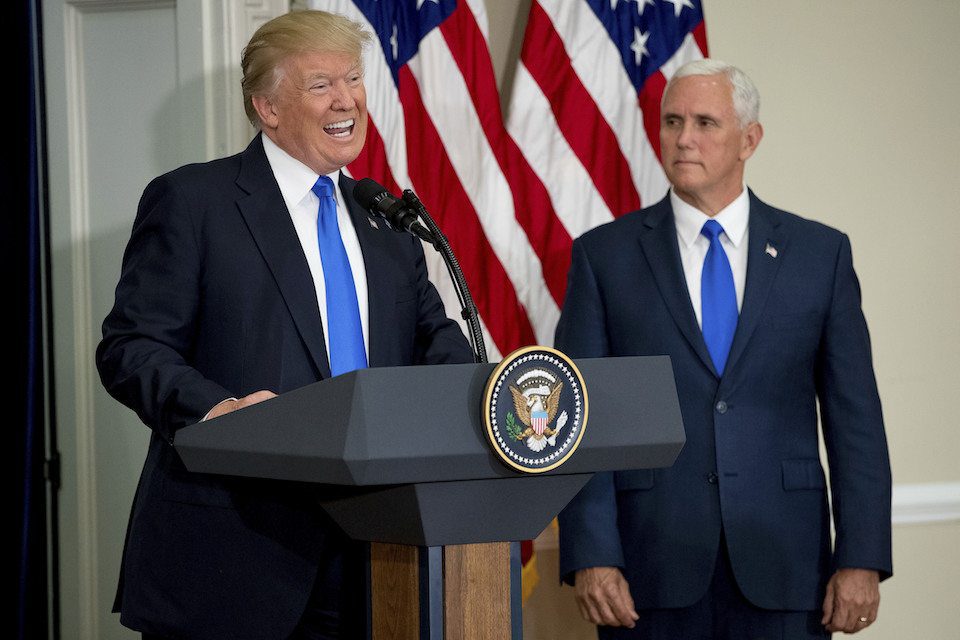 The Trump team's tall tale about saving 1,000-plus manufacturing jobs continues to unravel, as their bribe falls flat.

Six months into office and not only is Donald Trump’s ledger of presidential accomplishments a slight one, but parts of it are now evaporating in plain sight.

This week marks the half-year anniversary of Trump and Mike Pence being sworn into office, and on Wednesday, Carrier Corp., the air conditioner manufacturer, is laying off more than 300 workers in Pence’s home state of Indiana.

"The terminations are the first wave of about 630 planned before the end of the year as the company shifts work to Mexico," the Indianapolis Star reports. "Carrier's parent company, United Technologies Corp., also plans to lay off another 700 workers at a factory in Huntington near Fort Wayne."

And to think, this was supposed to be the company that symbolized Trump’s deal-making ability to save good American jobs.

Back in December, during a visit to the Indianapolis furnace plant, Trump bragged that he had personally saved 1,100 jobs….or more! "That number is going to go up very substantially as they expand this area," Trump boasted at time. "So the 1,100 is going to be a minimum number."

You’ll recall that was all part of a late 2016, early 2017 boomlet where Trump claimed credit for personally saving thousands of American manufacturing jobs, often in Rust Belt states, and the news media mostly went along with it.

It was all a mirage. Obviously there’s no way Trump, or any American president, can dictate the payrolls of specific global companies as they constantly adjust to marketplace trends. It was pure folly to think Trump could somehow govern by calling up CEOs, get pledges to save jobs, and then have Republican governors like Pence fashion together eight-figure sweeteners in the form of incentives to secure the deal.

Specifically, then-governor Pence’s administration lavished Carrier with $7 million in incentives not to reward the company for creating new jobs, which is how states usually operate. But Indiana paid Carrier $7 million to send fewer jobs to Mexico.

The Trump/Pence deal called for Carrier to stay in Indianapolis, in some form, for the next ten years. But locals aren’t so sure.

"They just don't have any faith in this plant staying in Indianapolis," Robert James, the president of United Steelworkers Local 1999, which represents Carrier workers, told the Star. "There's just too much uncertainty."

If folks in Indiana aren't sure they can trust Trump's word, they have ample reason not to.