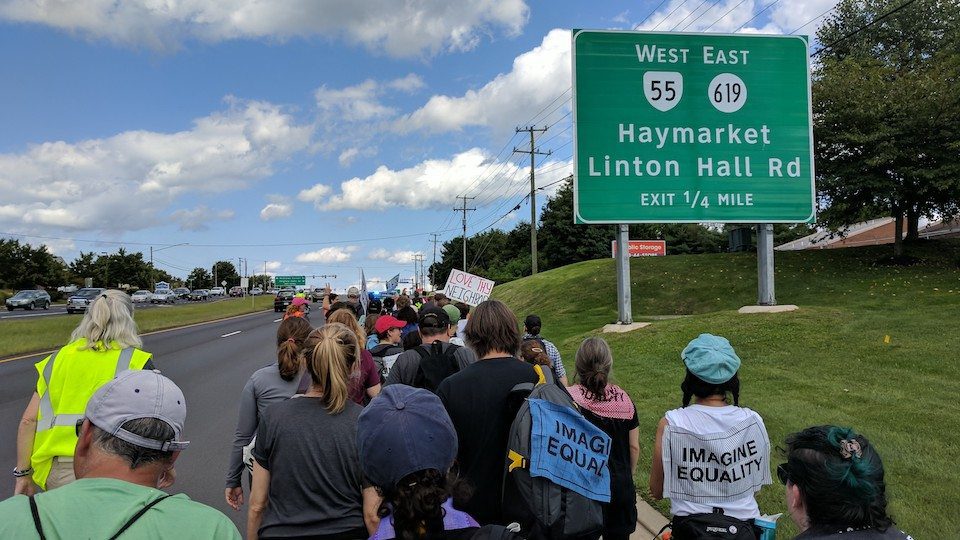 Justin Hendrix
Get The American Independent in your inbox

As the March Against White Supremacy reaches the outskirts of Washington, D.C., activists say they're prepared for a sustained, non-violent civil disobedience campaign calling for Donald Trump's removal from office.

Nine days and over 100 miles into their journey, activists participating in the March Against White Supremacy say their bodies are tired, but their spirits are high.

Chanting, singing, and carrying signs reading "No Hate In Our State" and "Imagine Equality," the marchers have trekked an average of 12 miles a day for nine days as they've made their way from Charlottesville, Virginia, to their final destination of Washington D.C.

The group plans to reach D.C. Wednesday, at which point the activists say they plan to take over the city in a sustained civil disobedience campaign marked by daily non-violent protests calling for the impeachment of Donald Trump.

"Starting on September 6th, we're taking over Washington DC," their website says. "We will hold our ground and launch wave after wave of civil disobedience demanding Trump be removed from office and that we begin to heal our nation's wounds of white supremacy."

"We were all there to mourn and celebrate Heather Heyer but also to stand defiantly against the hate that sits in the dark heart of white supremacy, which we have fought two profound wars against and sacrificed millions of Americans for," activist and actor Mark Ruffalo, who joined the march last week, told Shareblue Media.

The outburst of bigotry-fueled violence served as a catalyst for the march, which was organized by local activists and faith leaders, and supported by national groups including the Women’s March on Washington, Color of Change, Indivisible, Repairers of the Breach and the Movement for Black Lives.

The event has drawn participants from dozens of states around the country, with some marchers traveling to Virginia from as far away as Hawaii, California, and Oregon to stand in solidarity against white supremacy.

While the march started in Charlottesville, the fight against white supremacy goes much further back, Ruffalo said, reflecting on the historical roots of the movement.

"We marched for our ancestors that have been lost to the battle against white supremacy in the past,"Ruffalo said, "those untold masses that were hung from trees for sport, beaten to death to work for nothing in the vileness of slavery, those who were gassed to death in concentration camps, those who were slowly murdered on the trail of tears while their lands were taken and promises betrayed, those who were beaten and murdered on the march toward freedom in the civil rights movement."

"We were there, I was there, to express my grief but also to express the power of gathering together with the intent of making America better," he added.

Along the way, marchers were confronted with the very kind of racist violence that catapulted them into action in the first place.

Two days into the march, the group received threats of an armed person waiting for them at their planned endpoint in Madison, Virginia.

Saturday, the marchers reached Old Town Warrenton, Virginia, where the self-described "southern nationalist" and so-called "alt-right" group Identity Dixie had tacked dozens of fliers to utility poles throughout town. According to the Fauquier Times, "the fliers included the slogans 'HONOR YOUR HISTORY,' under drawings of Presidents George Washington and Thomas Jefferson; and 'WE HAVE THE RIGHT TO EXIST,' under a black-and-white photo of white children saluting the American flag." The flier also listed a link to a website that promotes racist, derogatory and homophobic views in its posts.

The event took on new meaning during its ninth day, as marchers listened to a live audio recording of Attorney General Jeff Sessions announcing the Trump administration’s decision to rescind Deferred Action for Childhood Arrivals (DACA), the Obama-era program that allows eligible undocumented immigrants who were brought to the country as children to live and work in the United States without the constant fear of deportation.

The Trump administration’s immigration policies were already a top concern for participants like Pauline Pisano, who said she traveled from New York to be there to "stand for the people of DACA," and for "immigrants, indigenous people, and marginalized people."

After Tuesday’s announcement, the organizers of the march issued a renewed call for action and said their work was only getting started.

"Ending DACA is the embodiment of white supremacy," the group wrote in response to the news. "Our 10-day march to Washington, D.C., ends on Wednesday, but our work against this administration's attempts to end DACA has just begun."

Many of the activists who participated in the march believe we've reached a turning point – a moment when the country can either allow white supremacy to become normalized, or decide to reckon with our nation’s history and confront it head on.

"[The march] strikes at the question we must answer: What kind of country do we want to be?" said Justin Hendrix, who traveled from Brooklyn to participate in the event.

While the marchers had different reasons for participating, all agreed that Trump’s alignment with the white supremacist movement makes him unfit to hold the office of the presidency. America can’t begin to heal itself as long as we have a leader who keeps inflicting new wounds, they said.

For that reason, among others, the activists are calling for Trump’s impeachment and the removal of all members of government who perpetuate white supremacy. They’re also demanding an end to policies and practices that disproportionately impact people of color, including the use of militarized police units and discriminatory stop-and-frisk programs.

"For years, white supremacist violence, rhetoric, and policies have escalated and intensified – exploding during Donald Trump’s run for president and reaching a boiling point in Charlottesville, as courageous people of moral conscience stood up to an army of white nationalists, neo-Nazis, and members of the KKK," the organizers wrote in a statement.

"This is the time for us to stand up for justice and equality. This is the time to confront white supremacy in our government and throughout our history. We demand that President Trump be removed from office for allying himself with this ideology of hate, and we demand an agenda that repairs the damage it's done to our country and its people."

Given the urgency of the moment, said participant Jen Martin, "How could I not be here?"