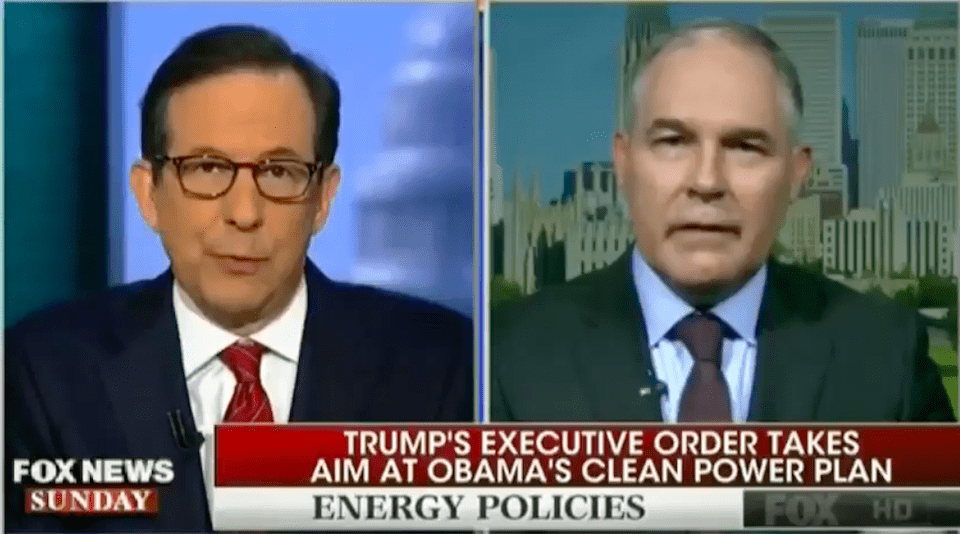 Donald Trump signed an executive order gutting the Obama administration's Clean Power Plan, ostensibly to bring back coal jobs that are, in fact, never coming back.

And when Environmental Protection Agency (EPA) Administrator Scott Pruitt made an appearance on Fox News Sunday to propagate Trump talking points on the subject, he ran into stiff resistance from host Chris Wallace.

Wallace began by citing an American Lung Association report that, he noted, says that "Half of all Americans now live in counties with unhealthy air," and added that "you are going to remove some of the pollution restrictions, which will make the air even worse." Pruitt responded by citing certain pollutant reductions that have occurred over the years, but Wallace would not be deterred, framing the issue in starkly human terms:

WALLACE: According to the American Lung Association, which would have an interest in this, 166 million people are living in unsafe air. And if you do away with the Clean Power Plan and boost — as the president promises — coal production, then you’re going to make the air even worse. What about those 166 million people?

PRUITT: Chris, I think what you are referring to is, we have about 40 percent of the country in non-attainment right now, those key air pollutants under our ambient air quality standards, which are outside of the CO2 discussion. And I agree wholeheartedly that we need to focus our attention at making sure we make progress there. In fact, that's one of the key priorities of the administration, is to improve air quality to be on the 60 percent attainment that we see. That's not been a focal point over the last several years, as much as it should be, anyway. So, I think —

WALLACE: And you think — and let me just ask, and you think that rewriting, in effect, doing away with the Clean Power Plan is going to improve air quality which you say is a major goal?

PRUITT: Look — look, Chris, I mean, I think what we have to keep in mind is that EPA only possesses authority that Congress gives it. And the EPA has tried twice to regulate CO2. One, with the tailoring rule, and the Supreme Court struck it down in the UR decision, and secondly, the Clean Power Plan that the president introduced in 2015, which is subject to a U.S. Supreme Court stay. As much as we want to see progress made with clean air and clean water, with an understanding that we can also grow jobs, we had to do so within the framework of what Congress has passed. The tools have to be in a tool box.

The past administration just made it up. They re-imagined authority under the statute. There’s a commitment with the new administration to have a pro-growth, pro-environment approach to these issues, but also to respect rule of law. You've talked about many times, the regulatory overreach, about executive fiat that the previous administration engaged in. We can't continue that process because what happens, Chris, is clean air is not advanced because you have litigation such as the Clean Power Plan. You have stays of enforcement against that Clean Power Plan and there's no progress being made with clean air and we are also spending money on litigation. So —

WALLACE: That goes both ways, sir, because the fact is, you are already in litigation on the attempt to reverse the Clean Power Plan. You are already getting sued on that. So, there’s litigation either way.

Wallace also went in on Pruitt hard over his denial of the overwhelming scientific consensus that human activity is the major contributor to climate change, and he stayed on him. Pruitt tried to soft-pedal his testimony, saying that he told the Senate that "there's a warming trend, the climate is changing. And human activity contributes to the change in some measure." Wallace quickly drilled down on him:

Wow, Chris Wallace is really not having any of Trump EPA admin @ScottPruittOK 's bullshit. Presses him hard on CO2 denial pic.twitter.com/q4uxaqq5az

WALLACE: But, sir, you are kind of sugarcoating what you said. You said there, I would not agree that carbon, CO2 is a primary contributor to global warming. And the question I have is, what if you are wrong? What if, in fact, the earth is warming? What if it is causing dramatic climate change and that we as humans through carbon emissions are contributing to it?

Simple question: What if you’re wrong?

PRUITT: Look, let me say to you, CO2 contributes to greenhouse gas, it has a greenhouse gas effect and global warming, as methane does and other types of gases. The issue is, how much we contribute to it from the human activity perspective and what can be done about it from a process perspective, Chris.

WALLACE: But don't you think the fact that we have these coal power plants belching carbon emissions into the air, you don't think that had — plays a role?

PRUITT: I think that we've done it better than anybody in the world at burning coal clean, in a clean fashion.

When Fox News is joining the resistance, that is a powerful signal indeed, and a reminder that even conservative media figures have to breathe air and drink water, too.