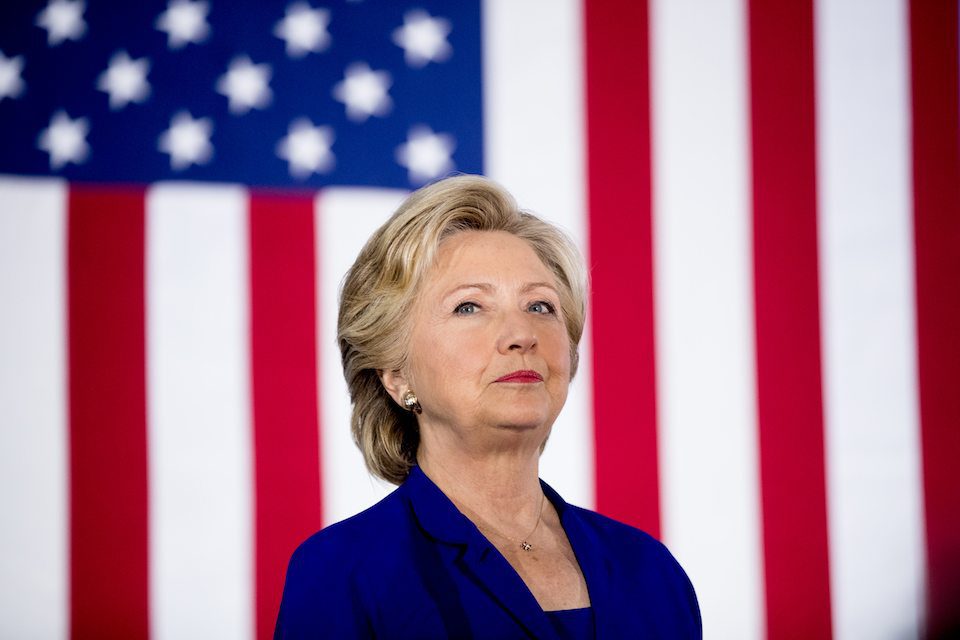 "Women are going to appreciate and be proud of Hillary Clinton for calling this out, because so many different women have this moment in their everyday lives."

It was one of the most memorably disturbing moments of the 2016 campaign.

During the second debate between Hillary Clinton and Donald Trump, while Clinton was answering questions, Trump loomed merely a few feet behind her, following her around the stage and remaining in the line of sight of the TV cameras.

Clinton later told Ellen DeGeneres that she felt like Trump "was really trying to dominate and then literally stalk me around the stage."

"And I would just feel this presence behind me, and I, you know, I thought, 'Whoa, this is really weird,'" she continued, echoing the thoughts of millions of women who watched the bizarre spectacle.

And in a newly released excerpt from her upcoming memoir, Clinton goes into further detail about that strange scene.

Trump acted like a "creep," Clinton says, and his behavior on that stage, in front of the nation, made her extremely uncomfortable — especially since her options for dealing with it in that particular moment were limited.

He was literally breathing down my neck. My skin crawled. It was one of those moments where you wish you could hit pause and ask everyone watching, 'Well, what would you do?' Do you stay calm, keep smiling and carry on as if he weren’t repeatedly invading your space? Or do you turn, look him in the eye and say loudly and clearly, 'Back up, you creep. Get away from me. I know you love to intimidate women, but you can’t intimidate me, so back up.'"

Of course, if Clinton had responded that way, it would have been treated by the corporate media, the Republican Party, and certainly by Trump himself as a joke, and as evidence that an emotional woman just wasn't fit for the presidency.

So, instead, she had to grin and bear it and keep doing what she was there to do, while her opponent acted like a sophomoric bully to try to psych her out.

And that is one more reason that women around the country remain so proud of her, seeing in her experience that day something that hit very close to home.

As SiriusXM's Zerlina Maxwell, who also served as director of Progressive Media for Clinton’s campaign and who was in the room for that debate, noted on MSNBC, "Women are going to appreciate and be proud of Hillary Clinton for calling this out, because so many different women have this moment in their everyday lives."

Clinton is "a very small woman — she's tiny! And so, essentially what he was doing was asserting his dominance over her, and trying to intimidate her," Maxwell pointed out.

And occurring as it did just days after the infamous "Access Hollywood" tapes came out, on which Trump is heard boasting about committing sexual assault, his creepy behavior took on an even more ominous feeling, especially as it mirrored something so many women are forced to deal with every day.

"Whether it be walking down the street or in the office," Maxwell continued, "'Do I respond and call it out? Or do I just take a deep breath and suck it up?'"

"This is something that women understand universally," Maxwell noted.

Since Clinton is unlikely to have any more campaigns in her future, "she can be completely, 100 percent honest about how she felt in that moment during the election, and how she feels now," Maxwell said.

And she touched on something else that many Americans surely feel, as they confront the disturbing reality of the Trump administration and cannot help but imagine an alternate universe under President Hillary Clinton:

It makes me sad, actually, that she feels like she let us down. I think some in the American public let Hillary Clinton down, if they didn't go out and vote, if they thought she had it in the bag. And certainly, as Mark [Murray, NBC News senior political editor] said, twelve days before the election, we all felt that way.