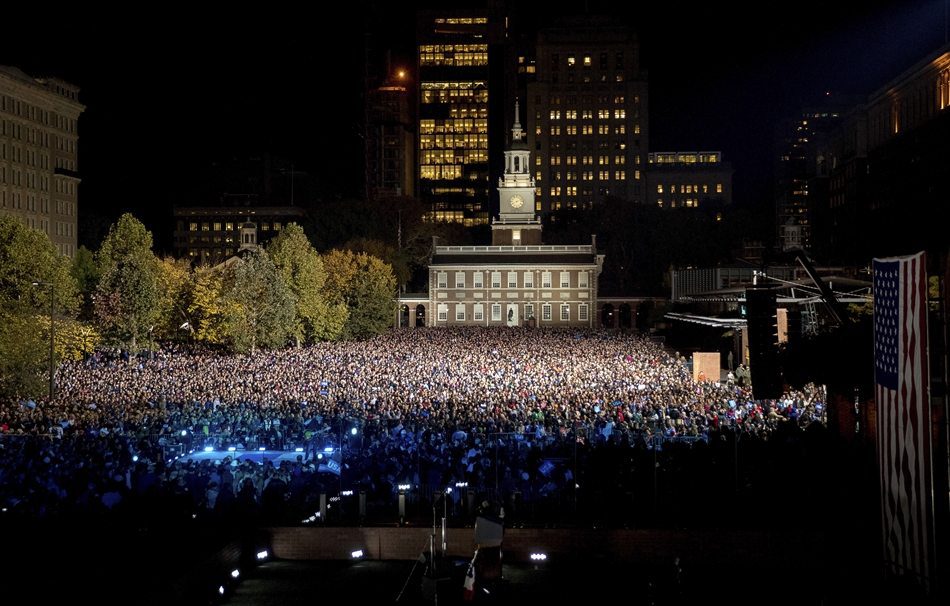 What a glorious way to spend the final evening of the 2016 campaign. Hillary Clinton and her family, Barack Obama, Michelle Obama, Bruce Springsteen and other luminaries led a huge rally in Philadelphia.

Love and kindness versus hate and fear: that's what the 2016 election boils down to. While Trump continues to spew his lies and rage in the closing hours of the race, Hillary Clinton concludes her quest for the presidency on a soaring note.

Nothing could be more fitting.

Bruce Springsteen: Donald Trump has a "profound lack of decency" and that his campaign's going down pic.twitter.com/O41NE5F4dF

NOW: Bruce Springsteen lauds Hillary at PA rally: "She sees an America that needs to be fairer" https://t.co/CVBZ2Af4zC pic.twitter.com/q3wkI3Badv

.@HillaryClinton busts a move at the end of her Philadelphia rally pic.twitter.com/8iuFpwzb0z

Look at their faces pic.twitter.com/ZpneQxPSc2

.@ChelseaClinton says she's proud of her mother @HillaryClinton; can't wait to vote for her https://t.co/XYGhI4MA14

"I'm a Republican. I am a gun owner. I'm a catholic. And I'm with her," Bon Jovi says at Clinton's celeb-packed Philadelphia rally pic.twitter.com/azDn5S6cCJ