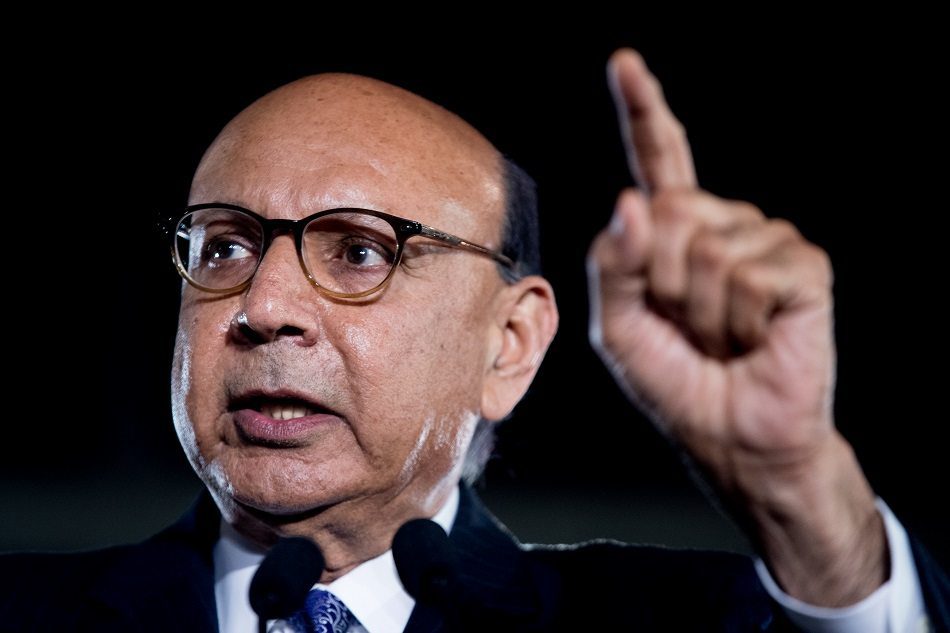 Concerned about Donald Trump's divisive Cabinet nominees, a coalition of faith, family, and community leaders is fervently calling for progressive action against his "cabinet of bigotry."

2,500 religious leaders across the United States have signed the petition from Faith in Public Life calling on members of congress to reject the cabinet.

In a press conference on December 14th, a group of those leaders, including Gold Star father Khizr Khan, urged congress to reject Trump's cabinet appointments.

Trump's choices so far are an amalgamation of generals, CEOs, and people with either little to no experience in or outright hostility to the area of governance they have been tapped to oversee. The coalition is also deeply troubled that many of the selected secretaries have bigoted views toward people of color, starting with Trump's nominee for Attorney General, Senator Jeff Sessions (R-AL).

The Reverend Jennifer Butler, CEO of Faith in Public Life, said at the press conference:

We must move in the streets and in the suites to counterbalance the extremism that we see going on. [We] have to have a movement that does not use the puny language of left versus right or Democrat versus Republican, but ask three simple questions, ‘Are these policies and appointments morally defensible, constitutionally consistent, and economically sane?’ We must also stand on the shoulders of the prophetic warriors who came before us. This is not America’s first time with a racist president.

And Khan reminded people of the importance of trusting faith to find solutions:

At each community gathering, I ask to sit with children and they have the same question, ‘When we come back from school, will our parents be there?’ I have no answer. But today, standing in this sacred house of God, I’ve found answers. This group of courageous faith leaders are a solution for us. Our faith teaches us that our creator never puts his creation in jeopardy without providing a solution.

The involvement of faith leaders across religions and denominations underscores the importance of interfaith leadership in a time when religious freedoms could be challenged by Muslim registries and immigration bans. With Sessions in particular tapped to oversee the Justice Department as Attorney General, many religious and community leaders are concerned that civil rights could be drastically eroded.

Such a push by faith leaders is part of a revival of the religious left in America. Progressive Christians are returning to church and being motivated into action by the threat Trump and Vice President-elect Mike Pence pose to the religious freedoms of minority religious populations.

And those threats are not limited to the White House, but are also coming from the Republican-controlled Congress. Senator Ted Cruz (R-TX) has promised to reintroduce the First Amendment Defense Act (FADA) along with fellow Senator Mike Lee (R-UT). As reported by Buzzfeed, Cruz said, "The prospects for protecting religious freedom are brighter now than they have been in a long time." But his definition of "religious freedom" is remarkably narrow.

FADA cynically claims to protect the “religious freedom” of conservative Christians by allowing them to legally discriminate against LGBT persons, as well people who have premarital sex. Like many pushes we have seen at the state level — including the Religious Freedom Restoration Act passed under Indiana Governor, and now Vice President-elect, Pence — FADA is simply another way to encode anti-LGBT bigotry into law and to rollback protections fought for and won over the past few decades.

This sort of legislation also implicitly posits that there is only one right way to be a person of faith, ignoring that there are many religious traditions in the U.S. whose definition of religious freedom includes vigorous defense of equality and social justice.

The success of Barber's religiously motivated, liberal, interfaith coalition of Moral Mondays protests points toward a real possibility of influence for this broader viewpoint. Right-wing fundamentalist Christians do not have a monopoly on faith. This call against the cabinet of bigotry proves that — and it is only the beginning.