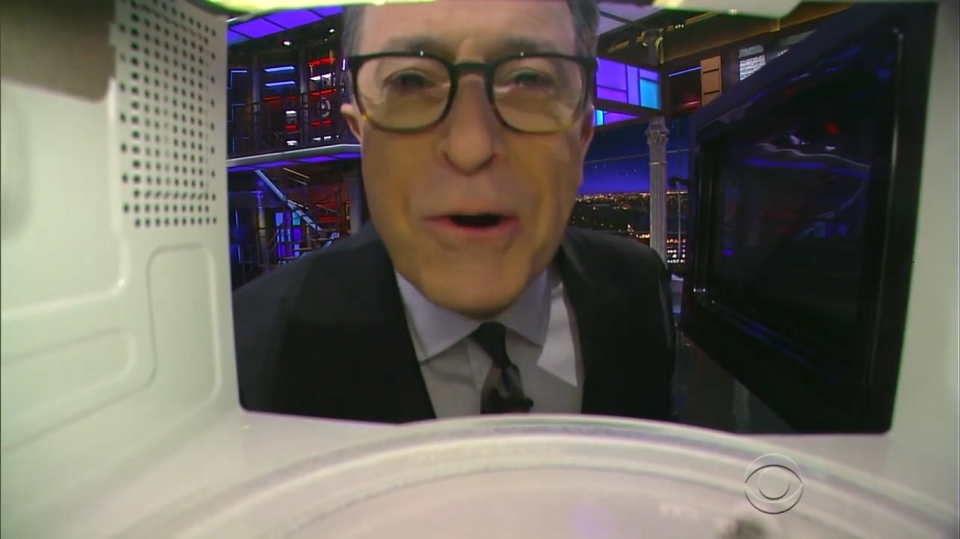 Trump White House counselor Kellyanne Conway inspired an ocean of deserved mockery when she suggested that President Obama could have used microwave ovens to spy on Trump Tower, but two of the best, most heartening examples came from The Late Show's Stephen Colbert and former official White House photographer Pete Souza.

The Trump administration missed the House Intelligence Committee's deadline to submit evidence of Donald Trump's lie that President Obama wiretapped Trump Tower, but they have managed to provide fodder for some much-needed comic relief from the steady stream of awful news that they generate.

Trump White House counselor Kellyanne Conway provoked much-deserved derision with her suggestion that President Obama could have used cameras disguised as microwave ovens to bug Trump Tower, the finest example of which was executed by Late Show host Stephen Colbert.

During his opening monologue, Colbert lampooned Conway's suggestion by showing his audience that the show's cameras had been replaced by microwave ovens. Then, Colbert used one of those props to simultaneously deliver a cutting spoof of Conway, and a message to President Obama that we can all get behind:

CONWAY (video clip): I don't believe people are using the microwave to spy on the Trump campaign. However, I have -- I'm not in the job of having evidence.

COLBERT: Okay... Who has that evidence job? Because it's certainly not Paul Ryan or Tom Price, and it would be nice to know if Obama was spying on everyone through the popcorn setting on our microwaves. (laughter)

Someone has been photoshopping one of my photos. For the record, it wasn't me.

Americans will continue to miss President Obama more every day, especially after the revelation that 24 million of them will lose health insurance if Republicans succeed with their plan to repeal Obamacare. They will also need all the laughter they can get.