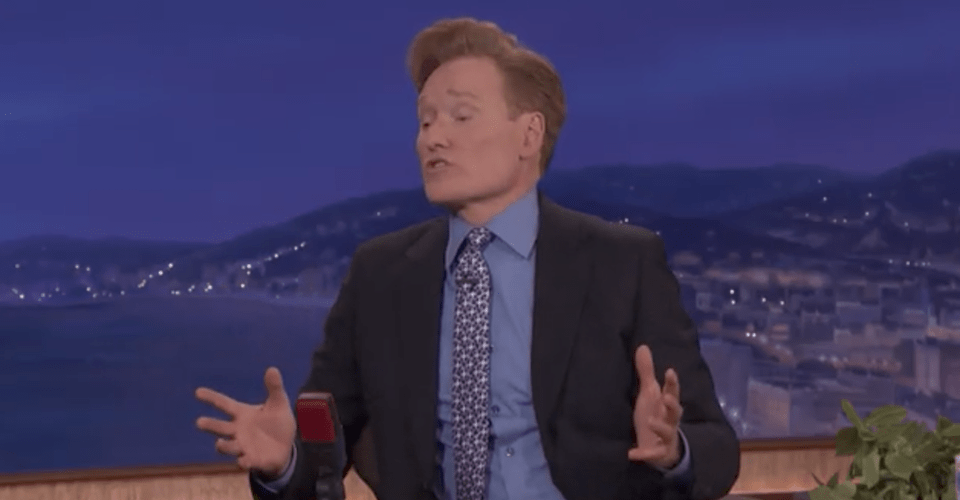 TBS
Get The American Independent in your inbox

The role of popular culture in politics has always been complicated, but in addition to acting as a potential bellwether for public sentiment, influential figures can help shape that sentiment.

Former Late Show host David Letterman, for example, had a tremendous influence toward the end of the 2008 presidential campaign, and former Daily Show host Jon Stewart was consistently ranked as the most trusted newscaster in America.

So when a late-night icon like Conan O'Brien takes a stand, it is a sign that something bigger may be happening.

While interviewing Rep. Adam Schiff (D-CA), ranking member of the House Intelligence Committee, on TBS' Conan, O'Brien delivered a blunt and sobering description of the allegations that the FBI and Congress are now investigating:

O'BRIEN: When I was growing up, I know we're similar ages, but when I was growing up, we were always taught in school that it's treason. There was nothing more sacred or, there was no worse crime in the world than treason, and it seemed like it was taken almost kind of lightly, that, you know, Russia might be interfering, but that might be a good thing, or it was adding to the fun of the combat. It seemed people weren't taking it as seriously as they should've been taking it.

O'BRIEN: And there's also been a question about, did President Obama — he knew about it but he was reticent, maybe, to push it too much because it might look like he was putting his finger on the scale, is that possible?

SCHIFF: That's right. At the time, we were urging the president to tell the American people what was going on. That the Russians were doing this, and they were reluctant, I think they didn't want to be seen as interfering, or putting their hand on the scale. They were also worried about the Russian reaction, maybe the Russians would retaliate. My feeling, though, is that the failure to speak out, the failure to attribute, to condemn the Russian involvement, would only invite further Russian involvement.

Legally speaking, a charge of treason would be an incredibly heavy lift, but as a descriptive matter, it is very useful. What O'Brien cannily nails is the lack of seriousness with which Trump is treated, and consequently, with which these allegations are treated. So much attention is paid to the Trump circus that the deadly seriousness of what occurred during the election gets lost in the shuffle. It is telling, as well, that Schiff did not push back on the description.

O'Brien is not the first to characterize the allegations against Trump this way, but he is the most culturally influential to do so. His harsh pronouncement is a sign that the message of grave concern about the Trump campaign working with Russia during the presidential election is getting through. So is the 73 percent of Americans who now favor an independent probe of the Russia allegations. The time is coming when Republicans in Congress will have to start listening.

Here is the full exchange with Rep. Schiff, from TBS' Conan: