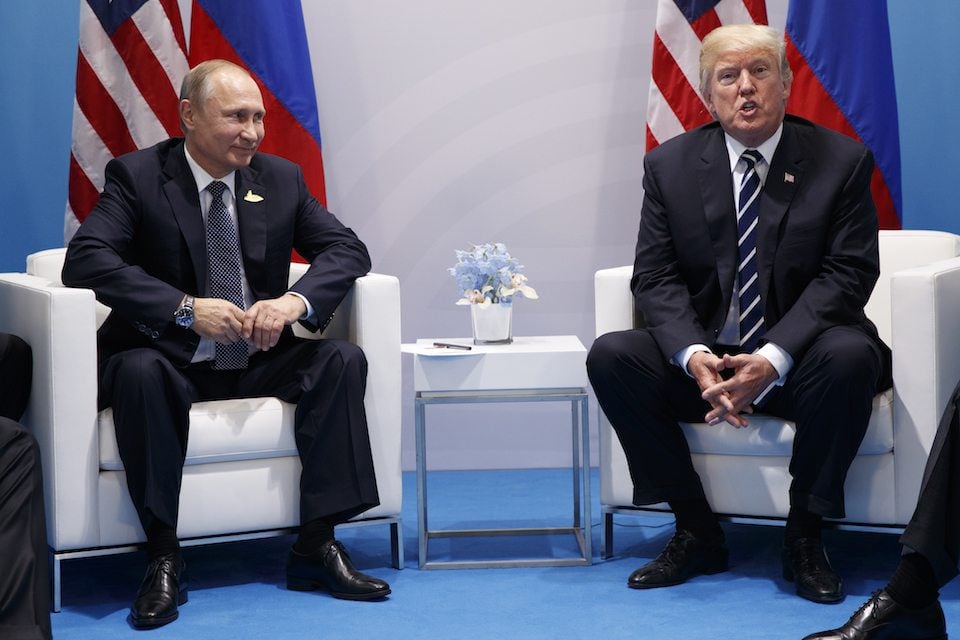 Rather than buddying up to Vladimir Putin, the House and Senate just reached a strong and sweeping agreement on sanctions against Russia.

Donald Trump's multiple meetings with Russian President Vladimir Putin during the G-20 summit — which Trump insists were mere "pleasantries" touching on adoption policies — were not enough to dissuade Congress from meting out appropriate punishment for that country's interference in our election.

As CNN reports, the bill will also include a rebuke to the administration: "Despite the White House lobbying for changes to the measure, the legislation will give Congress a new ability to block the administration from easing sanctions on Moscow."

The bill, which will also contain sanctions against Iran and North Korea, could end up on Trump's desk by the end of the month.

And unless he wants to raise even more questions and alarm regarding the investigations into his campaign's dealings with Russia, Trump would do well to sign the bill.

As NBC News notes, "The White House had objected to a key section of the bill that would mandate a congressional review if Trump attempted to ease or end the sanctions against Moscow."

But if Trump dug in his heels and vetoed the bill, he would risk "sparking an outcry from Republicans and Democrats and having his decision overturned," as the notion of congressional review was included in the legislation "because of wariness among lawmakers from both parties over Trump's affinity for Putin."

NBC's Andrea Mitchell expanded on this thin line Trump would be walking were he to veto the bill, noting that "it would be very awkward for the president at this stage, with all the Russian investigations going on, to say, 'No, not so fast. We don't want to sanction North Korea, Iran, and Russia.'"

And even if Trump were to veto the bill, Congress could override his veto — something that would seem likely considering the overwhelming support for the legislation and specifically for punishing Moscow.

"Most people would advise this White House not to take Congress on," Mitchell declared.

MITCHELL: So, the Republicans on Capitol Hill are now sending a very strong signal to the White House: They want these sanctions, they want Russia to be put on notice. And I think it would be very awkward for the president at this stage, with all the Russian investigations going on, to say, 'No, not so fast. We don't want to sanction North Korea, Iran, and Russia." That would be a tough thing for the president to actually even suggest.

WITT: But were he to do that, Andrea, does the House have override authority if the president expresses his displeasure and opposes it?

MITCHELL: Well, if the president were to veto it, they could, of course, try to override it. This passed overwhelmingly without the North Korean piece to it — overwhelmingly, 98 to 2 in the Senate, and it's been sitting in the House, while the House at the direction of the White House wanted more authority, more waivers for the president. As it's now turned out — and we're just reading the details now, so we haven't read the bill itself, we're reading the reports on the bill — but what just happened over night now and this morning is that they've come up with a solution that gives Congress a lot of authority, and that could be a breaking point with the White House. Most people would advise this White House not to take Congress on, because this has strong bipartisan support in both houses.

No one would ever put money on Trump heeding the advice of "most people," no matter how potentially damaging to the country, the government, or even himself it might be to ignore it.

After all, this is a man who is reportedly considering pardoning not just nearly everyone in his administration and inner circle who might find themselves ensnared in the ongoing special counsel investigations, but also potentially pardoning himself — despite the fact that there is no precedent in history for such a move.

As Democratic Whip Steny Hoyer noted, the sanctions package would ensure that "the Majority & Minority can exercise our oversight role over the Administration’s implementation of sanctions."

In the Trump era, particularly regarding his new pal Putin, that oversight is more crucial than ever. Congress is ready to do its job to defend our democracy, despite the president's reluctance to do the same.