Home National Congressional Black Caucus to reject Trump's request to use them for a...
Progressive journalism is under attack. Please help us fight back!
DONATE 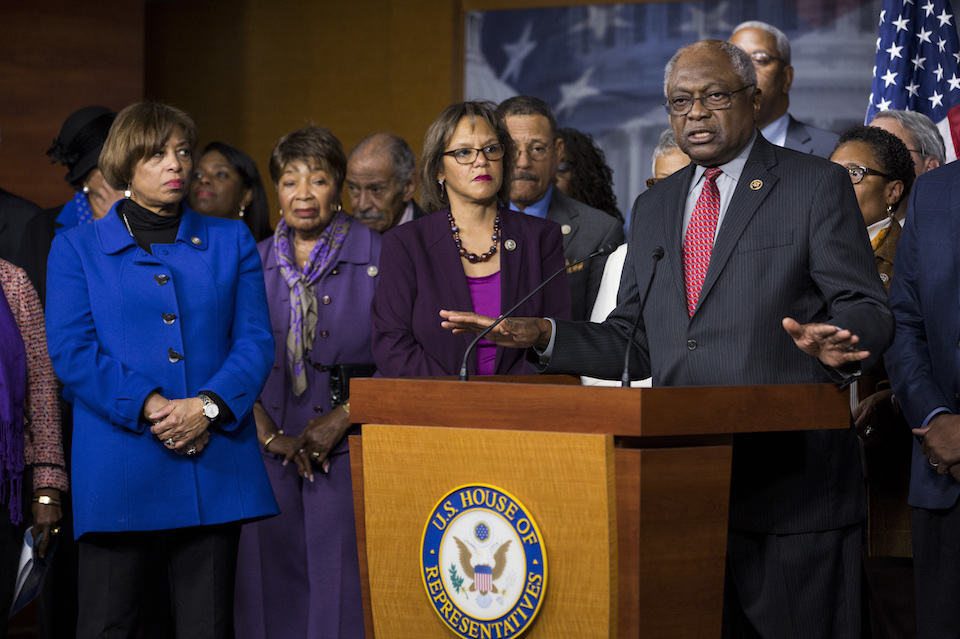 (AP Photo/Zach Gibson)
Get The American Independent in your inbox

The Congressional Black Caucus plans to reject an invitation for a White House photo op with Donald Trump, who summoned them with a letter from aide and reality TV contestant Omarosa Manigault.

The Congressional Black Caucus (CBC) is unlikely to attend a photo op session in the Oval Office with Donald Trump, even though he used former "Apprentice" contestant and White House aide Omarosa Manigault to summon them.

While the rejection is not yet official, sources in the organization told Politico that the CBC is not interested in being the latest organization to provide public relations cover for the Trump administration.

An aide told the outlet, "No one wants to be a co-star on the reality show."

Members of the Caucus were invited to meet with Trump in a letter signed "the Honorable Omarosa Manigault." Politico notes the overly grandiose title turned off members, as she hasn't earned it and has done nothing to elevate the CBC's concerns to Trump.

Trump has used Manigault — who appeared on season one of "The Apprentice," as well as on "The Celebrity Apprentice" — as his emissary to black-led organizations, but they continue to reject her as a shill for an administration with an avowed disinterest in advocating equality.

In April, she addressed Rev. Al Sharpton's National Action Network, where the audience audibly groaned in response to her speech.

The memory of Trump's recent actions with the heads of historically black colleges and universities is no doubt weighing on CBC members. Trump hosted those leaders in the Oval Office during Black History Month, and promised them that he would work to fund those schools. As has been the case with nearly every issue in his presidency, that was a falsehood.

Trump never offered a plan to fund historically black institutions, but he did stage a photo op with prominent African-American leaders in an attempt to whitewash his legacy of racial intolerance and bigotry.

The CBC rejection of Trump is an attempt to cut off his strategy of using media-heavy moments to cover for inaction or even outright hostility toward initiatives of supreme concern to minority communities, including criminal justice reform and voting rights. Trump has tried to undo reform efforts, while continuing the GOP initiative to suppress minority voters in order to produce election wins for Republicans.

They won't give him a photo op to cover for his failings, even if reality TV star Omarosa asked.