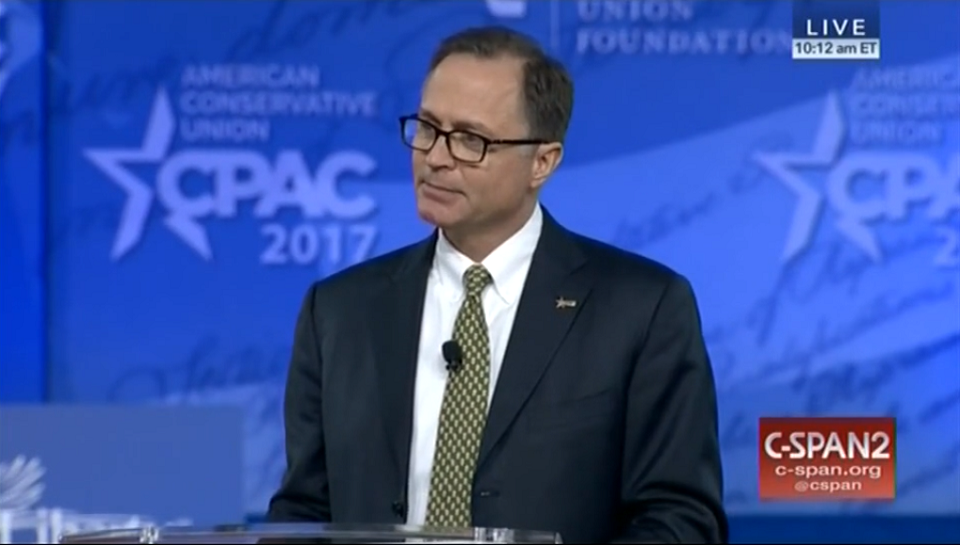 Dan Schneider, executive director of the group organizing the Conservative Political Action Conference (CPAC), tried to describe the alt-right as "left wing," despite the alt-right's presence at CPAC.

The "alt-right" movement remains a huge part of Donald Trump's base of support. But some conservatives seem to be uncomfortable with their president's close ties to a movement led by white nationalists, and are now attempting to deny the connection.

Enter Dan Schneider, the executive director of the American Conservative Union, which organizes the annual Conservative Political Action Conference. CPAC 2017 kicked off this week, and in addition to Trump, Vice President Mike Pence, and the usual slew of conservative politicians and pundits, this year's convention is studded with prominent figures from the alt-right.

But in Schneider's CPAC speech, he claimed the current alt-right is a left-wing movement, and urged the audience to disavow them:

Just a few years ago, this hate-filled left-wing fascist group hijacked the very term 'alt-right.' That term, 'alt-right,' it has been used for a long time, in a very good and normal way. But this group has hijacked it, hijacked the term. And they did it intentionally because they want to deceive the media, and they want to deceive you all about what they stand for, so they can try to become normalized, and we must not allow them to be normalized. They are not part of us!

Schneider's claim that the term "alt-right" has been "hijacked" by "left-wing fascists" is demonstrably false. The phrase was first coined by white nationalist activist Richard Spencer. Not only is Spencer an avid Trump supporter, he attended CPAC himself and sat in on Schneider's speech.

Spencer was ejected from the premises upon his discovery. And the ACU had to uninvite alt-right commentator and Breitbart News editor Milo Yiannopolous, after the discovery of YouTube footage in which he stated older men should be allowed to sexually assault 13-year-old boys.

But other alt-right figures were welcomed to the conference with open arms, like Steve Bannon, former chairman of Breitbart and advisor to Trump. Bannon, who has openly boasted in interviews that he turned Breitbart into "the platform for the alt-right," was given a prominent speaking slot at CPAC alongside other members of Trump's administration.

And Breitbart itself was prominently featured at CPAC, complete with vendors hawking the company's merchandise:

Breitbart has a swag store at CPAC pic.twitter.com/aKGdrv4q2p

The conservative Republicans in charge of CPAC have found themselves in the odd position of catering to the alt-right, while simultaneously denying their involvement with them. If that sounds familiar, that is because our president is doing the exact same thing.

Some Republicans are seemingly growing uncomfortable with the white nationalists Trump has brought into the fold. But the disorganization and mixed signals from CPAC show they still have no idea how to reconcile this conflict.